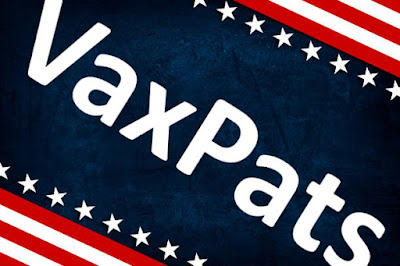 Paul Joseph Watson stated a few days ago that finally with Dictator Joe  Biden's vax rapine that Americans had finally drawn the line in the sand, much to his relief. I'm not convinced if these shift politicians are no more evolved than the pied pipers they have ever been in allowing Birther Hussein to serve in the White House or stopping Pedo Joe's 1% from stealing the 2021 elections.

To place your faith in the US Bungholer Courts of John Roberts sodom up the arse, baby butchering, gun confiscating, Biden election thievery is like being a Clinton spouse believing the first words, "Honey I didn't do it..........." every time.

So we all begin at the same point in this, he 1% designed, scripted what Joe Biden said in becoming Dictator. This is by design. When Biden moved to carve off the woke corporates IN ORDER TO UNEMPLOY AMERICANS so Mexicans and Indians would replace them, it was in this crippled economy meant to financially deplete Americans. You were told this by the popular girl not that long ago what the strategy of all of this was, and it once again is coming true. You though are focused on the mandates, and not the operational strategy as you do not understand warfare. Now you are aware of a necessity of this.  You should probably in being rich from France to the United States pay for these revelations so they keep coming, for the reality that if you have not noticed, the Lame Cherry is the only one who is explaining the operational side of this which is sort of vital so you do not get out maneuvered.
I've been having lots of company on this blog again, spiders in the wire. The subjects which appear to trigger this are, the vax, Q Peters, the Judas Goats leading you to your demise. A great deal has been invested in this mine field, and the Lame Cherry has kept your little feets from stepping on things and tripping wires. The Kit Carson Scout has got you Joan of Arc through this far, but this has just started.

So we are at a point now in the VaxPats who are Patriots who will not be vaxed or submit to Joe Biden as a Dictator.

Trusting in courts for the Governors is foolish, unless these Governors are investing that time to produce a federated cooperation for their security as the 1% who wrote Dictator Biden's speech made certain he threatened the Republican Governors to get them out of the way.

Dictator Biden's already plotted agenda is to first unleash the Department of Justice to criminalize and hamstring these GOP Governorns. Once Biden Jan6es them, meaning once Biden has a federal order which the Governors will have to follow, the minute they do not, then in arrive the FBI just like the Jan6ers have discovered and Kristi Noem will be put into the lezbo hotel with the 300 pound sexy lesbians, chosen to break these politicians.

That is the preparation these unprepared for Governors should be investing their time in, as Joe Biden already is making his moves, like Abraham Lincoln in his war against the South in picking off Maryland and slicing off West Virginia from Virginia.

The map though of the VaxPats is not just Maryland. 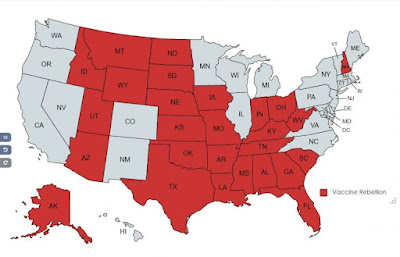 That is the best hope as there is greater safety in numbers. It is a given that Kristi Noem dragged out of bed at 3AM by FBI SWAT will probably make most of these GOPliters take a knee. At this moment the best of the lot is not the prima donas of Florida, Texas and South Dakota, but the Governors of South Carolina and West Virginia. They have made the most American of statements and in this, do not underestimate Merrick Garland at DOJ, as he has more than one FBI team. You could indeed wake up one morning and discover that every Governor in the above states has been hauled away into the night like Paul Manafort and Roger Stone, and replaced by a Dictator appointed Administrator with full Homeland machine gun backing and full National Guard checkpoints, until new elections are appointed.

I have no idea of Governor Gimp of Texas has expanded the Texas Rangers and County Sheriffs to deputize there Citizens of the Badge to secure that State or if these other Governors have moved to like measures, including limiting all federal law enforcement to no more than 5 members, including Judges, just to make sure that those knocks on the doors at night do not have Kristi Noem on CNN in her nightie.

As stated, Joe Biden just like the Jan6 set up has all of this moved 10 places down the road. He has been lying like Fauci over mandates for all of 2021 AD in the year of our Lord, and right on schedule as this blog predicted the September COVID spike would appear to usher in the new tyranny.

The point in this is, if you are trusting Kristi Noem or these other politicians, you are a fool,  because none of them are discussing what happens when the courts order them to comply, which means Vaxed Kristi is Corona Queen again and you are going to be facing the same mandates now with federal force. You probably should have topped off your food and fuel cache in the meantime in preparing to have this storm pass over until a bigger one brews, as they are coming from this dictatorship, an there is not any doubt about that.

This court time, is your time to contemplate how to be secure in your home, if you need to move to a family cabin before any fed mandates seal everything and your finances, so that no matter what appears, you are not reacting or even acting out. You have your security, you know how you will weather this, and your preparations and Faith in God, not have you a target on the hunt down lists. That is what you peacefully do with this time which has been provided you. You keep moving by the left flank, you do not get rattled as you have a plan, to get into the summer of 2022 AD in the year of our Lord and your extended plans are for into 2023 AD in the year of our Lord, when other game changing events will have removed this vax problem from your major concerns.

As long as you are prepared, you know what you are doing, and you do not become frightened or angry and cause yourself problems. You look for bigger issues to overwhilm the Vax State and then the little mouse that you are scurries around not noticed any more.

These Governors have provided you a blocking action on this chess board. You use it to your advantage as this is your board and they made a move to benefit you. You prepare even more, refine what you have and you consider all contingencies, because the reality is, the worst things you can think of are going to start manifesting in the next years ahead. So you trust Jesus and not these politicians who got all of us into this mess, because we trusted them. That way your foundation is stable and you keep moving to those bridges in the future you are building for your life and your safety.