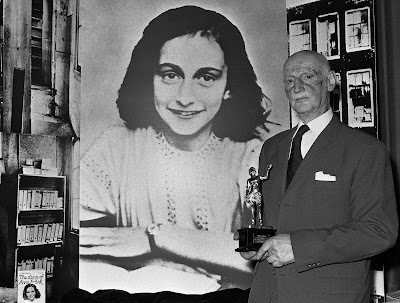 I want to thank Adolf Hitler for all the money he made me
after the holocaust.

Otto says that he was influenced by a family friend, who conveniently worked at a publishing firm and convinced him that the diary would depict the experiences of those who had to endure the “evil” during the war.

I have never read The Diary of Anne Frank no more than I would waste time on something like War and Peace, as such drivel never interests me, but repulses me in chronic victim whining.

I did come upon a WayBack article though which was interesting in the author took apart the diary and started asking real world questions, which are relevant and require answers, as the charge is Anne Frank never wrote a diary, instead it was a propaganda created by her banker father, Otto Frank to exploit the "holocaust" for profit.

I had always thought that the Frank's lived in some loft above an apartment which was secret. No they resided in her father's factory in a walled off area. There were workmen there and neighbors, and in references in the diary, there were toilets flushing, radios playing, wood being chopped, wood being burned, cooking and a pile of cats creating noise and smells along with 8 humans.

With all of that going on, there is not any way that the Gestapo would have missed any of this, along with transparent window covers in which the rooms were lighted with candles and electricity at night. If the story was true, the Frank's would have been caught in the first month of Nazi occupation, for the simple reason, they were buying food and sacks of potatoes from the grocer.  Such displays would have had the Gestapo alerted as that was their job and they were thorough.

The services that the shelter house had in addition to a bathroom were also electricity (Saturday, November 28, 1942) … and even a vacuum cleaner … and, as mentioned, a radio, food, provisions, and a wood stove, where Jews used to burn wood, food scraps, etc., obviously producing smoke … from the chimney, highly visible smoke to anyone in the surrounding area. Anne confirms the existence of “neighbors” who could hear noises and discussions coming from the den. So how did they live in so much fear but continue to live like a normal family?

The light was turned on in the evening hours, ignoring the “transparent sheets” in the windows, and the nightly patrols of the SS

There is also the mention in the diary of the girl in 1942 hoping to be cremated as were other Jews. The problem with that is, that information was not widespread or even propagandized until 1943 AD in the year of our Lord. Anne Frank is writing about future thing which she could not have known. It of course means the diary was embellished by someone not her.

There is also the problem that she died of typhus as numbers of Europeans did, as it was rampant and the Nazis as much even more the American Army were spraying pesticides on people and cities to try and stop this plague of the ghettos.

The reality is that like Go Ask Alice, which was infused into children's minds as required reading and made a fortune sob story for the propagandists, Anne Frank never wrote a diary. Her father did and the things he recorded of the terror 8 Jews lived in during the war, coud not have taken place as the Gestapo would have captured them in days in the racket they were making.

I once saw a Jewish holocaust story, but it was only once in CBS, and it featured Jews selling a crippled Jew for a jar of orange marmalade. That never saw the light of day again as it affects the propaganda, like communist Jews were butchers in Slavic lands and the Slavs celebrated the Nazi's liberating them from the Marxists.

The Lame Cherry is not interested in branding Nazis or Jews. I simply want the Truth. Why are their so many holocaust museums in the United States, when America had nothing to do with that event, except Frank Roosevelt not wanting Jews deported to America and forced a ship with them on to leave as refugees. America did import reams of European Jews, who were communists and they infused American politics with the same racial profiling that Europeans were brought down by socialization, which has now bankrupted America.

I doubt the world is going to last long enough to write a real history of World War II, in the next 20 years when all of these hucksters will be dead and people can begin reading the facts, not Marxist propaganda.

Suckering people with stories which upon examination do not add up, bastardizes history and deprives all from the frankness which is necessary to keep nations from repeating the horror which brought us wars for the profits of the rich, who never get blamed for anything, as they scapegoat others, which in the case of Anne Frank, was a work of fiction.