Justin Trudeau is the Nicholas Ceausescu of Romania 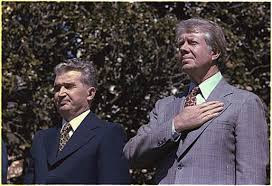 Dictator Biden has a historical link to aiding butchers of their ow peoples.

Well the situation in Soviet Canada is reaching the badminton stage as Justin Trudeau fled to his fluffy bed hideaway, whereby the Mayor of Ottawa, returned the birdie after his police state issued hundreds of  "terrorist misdemeanor" citations against Citizens, in declaring a "state of emergency".

The reason for this return is to give cover to Tyrant Trudeau to deploy the Mounties and the Canadian military to shoot beat, tear gas and shoot down like Ashli Babbitt the Patriots of Canada which are demanding their freedom.

Ottawa mayor Jim Watson has declared a state of emergency, citing “serious danger and threat to the safety and security of residents,” as Freedom Convoy truckers and their pedestrian supporters continue to occupy the capital. The move comes after Watson lamented earlier on Sunday that police have been outnumbered by the demonstrators, and indicated he wants the federal government to help squash the protest.

“The situation at this point is completely out of control because the individuals with the protest are calling the shots,” Watson told Newstalk radio. “They have far more people than we have police officers and I've indicated to the chief that we have to be much more nimble and proactive when it comes to these activities.”

The head of Ottawa police thugs has now declared that it is a crime to provide food, water, blankets or humane treatment to the Canadian Patriots. Yes providing a cup of tea in Canada to someone is now an act of domestic terrorism.

We will soon see what the 1% have gamed in this as the Trudeau regime is not going to back down in this tyranny. That means Trudeau will deploy Canadian military to confiscate and tow away trucks, and in the process gun down Canadians in the Ottawa streets.

It is no doubt that those Americans showing support for the Canadian Patriots are already on Attorney General Merrick Garland's domestic terrorism list and will be visited by the FBI for supporting international terrorism. Perhaps this is the Canadian Bait On programme. It should not be over two weeks before we have  the final solution to what the 1% have planned revealed.

It took the Chicoms 6 weeks to run their people over with tanks at Tienanmen Square. Tyrant Trudeau can not wait that long as he is politically ruined as a tool of the 1% and has lost control of the Canadian Provinces. Justin Trudeau is the Nicholas Ceausescu of Romania. A true despot of disgusting proportions.

Just understand that the set up of Jan6ers by the NSA in America was designed. What is happening in Canada is by design too. The outcome of this was already decided before it took place. This was not played out for Canada, but what is taking place in Ottawa is aimed at Americans. The talk of American convoys or convoys in Europe is coming from the police state to further this agenda that the vax built on.

The reality is the Mounties and Ottawa police are at war with Canadian Citizens demanding their liberty restored. The same way the American DOJ is at war in American on the right while supporting the Obama Soros Buffett funded ANTIFA and BLM for their political agenda.

Will Trudeau have his Tienanmen?  It has now taken that step and as Americans after Jan6 knew enough to run, these Canadians are locking themselves in the cage with the brown bear.