To understand North Korea, is to understand not a group think, but an Animal Farm bribe straight from George Orwell. The Lame Cherry has always hoped for the best for North Koreans, but in the following analysis of the Psychological Warfare which is North Korea, is the Cyberwarfare, and in this a  sort of Game of Thrones has taken place with the necessity of Kim Jong Un's weaknesses.

Kim Jong Un was the best hope for North Korea, but his passing has brought about something which is a threat to North Korea itself. You must understand the Kim family immediate to Kim Jong Un. Jong Un was forced to execute his brother Nam for being a CIA asset. his other brother is somewhere in the North Korean ruling elite. His two sisters are both involved in the management of the gathering of foreign exchange, which not only supplies the Kim family, but supplies the bribes to the North Korean party members and military to keep the Kim's in power.
It is a "You wash my back and I wash your back", a royal dynastic estate in which both parties need each other.

The threat is, that unlike Kim Il Sung, Kim Jong Il and Kim Jong Un, the sister who is in charge of propaganda and larceny, was married off to the son of one of the powerful families in North Korea who just happens to be a hinge pin in this infamous 3rd Floor Office of Intelligence and Finance.

In bliss this could be a powerful union. In the turmoil of factions, the infamous Kim dealing with those not loyal to the family may indeed find their being denounced and excecuted.

U.S. and other intelligence analysts think he has assigned his sister and potential successor, Kim Yo-Jong, and her husband significant roles in overseeing the money that flows through it from a wide variety of legitimate and illicit activities to family bank accounts and government slush funds.

The officials and outside experts readily concede that with the exception of visible missile launches and flagrant airport assassinations, they are skeptical of intelligence on North Korea on its best days. But the information available from defectors and other sources indicates that Kim’s sister and her husband, by some accounts a son of the nation’s nominal head of state, have their hands on the office’s purse strings

The Lame Cherry is not stating that Mr. Kim Jo Jong is going to cut off his wife's head, but what I am stating is that where the Kim family had 100% control of this regime, it now has a regime where Jong Un is dead. For national security and stability, the Worker's Party has created a ruse where Kim Jo Jong is regent, as she speaks for the government. She protects the dynasty for Jong Un's children until they will come of age to rule.

While everything is agreeable now, what happens when like Jong Il and Jong Un came to power that they start executing family members who are a threat? Who is the bigger threat than a 52 year old Jo Jong with a connected husband who may not desire to bow at that waist as deeply as they should to their nephew and the nephew with power does not appreciate the slight and executes them.

How long is it going to take for the husband to start pondering that accidents happen to children of kings like Richard III? How long before this son of the morning starts hedging his Kim bets and realizes how expendable he is as Jo Jong finds young secret service men more obedient than questioning husbands

98% control is not 100% absolute control. That 2% is an expanding margin where an insider can produce a house of cards.

The question is, "How long before Kim Jo Jong, figures this out and denounces her husband, along with his family and allies, for permanent resettlement?"

How long before the family so well connected unleashes a ricin flu to eliminate their threats?

The Supreme Leader Kim Jo Jong sits atop a system of graft for power. There are 7000 skilled and dangerous operatives in what rules and controls North Korea. 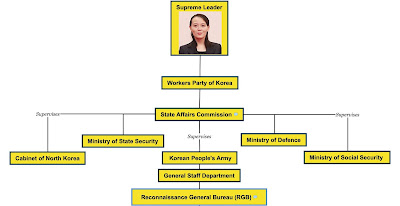 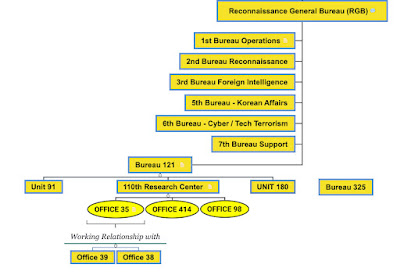 Below is the rainbow system of North Korea in how it operates in the dark against the outside world and the inner workings. What happens when this too strong union of Kim Jo Jong begins fracturing and the system below begins attacking itself?

In addition to North Korean cell phones, the regime also has its own operating system used by the government and military, called Red Star OS.

Red Star OS (aka Pulgunbyol) is the operating system created by the North Korean technology research center, the Korea Computer Center (KCC). The KCC created version 1 in 2008 and incrementally updated it through version 4, which they began using in January 2019. Red Star OS is based on Linux, though the first versions visually mimicked Windows XP, and later versions looked similar to Apple’s OSX operating system.

The KCC also created a custom browser to traverse the internet called Naenara, built on open-source Firefox code. The browser comes configured to use “Sam heug,” North Korea’s search engine developed using Chromium open-source code. By using their own intranet, operating system, and search engine, North Korea adds several layers of security between their data and the rest of the world.

Unit 586, the RGB is North Korea’s premier military intelligence agency located in Pyongyang, North Korea. In 2009, North Korean leadership created the RGB by merging the Operations Bureau, Office 35, and the Reconnaissance bureau into one central entity as part of a massive restructure. The RGB conducts cyberwarfare operations and employs nearly 7,000 trained hackers for espionage and financial theft operations.

Unit 121, also known as the Cyber Warfare Guidance Unit, is the elite cyber unit of the RGB. Unit 121 oversees several other military units, including Unit 180, Unit 91, Lab 110, and its subordinate organizations. Unit 121 conducts cyberattacks to sabotage, deny service, and steal information from foreign nations. However, around 2015, Unit 121 revised its goals, narrowing its operational scope to focus specifically on hacking campaigns designed to disrupt adversarial nations’ critical infrastructure such as gas, power, transportation, aviation, etc., in addition to traditional cyber espionage. Many of its members are selected from the Pyongyang University of Automation

Unit 91, also called Office 91, is located in the Mangkyungdae-district of Pyongyang, NK, and “serves as the headquarters for hacking operations.” As part of its “headquarters” designator, Unit 91 supplies equipment and mission-essential resources to Lab 110 and its subordinate units

Lab 110 is also known as the “110th Research Center” and the “Technology Reconnaissance Team” and is another arm of North Korea’s cyberwarfare program. Lab 110 is responsible for sabotage attacks involving destructive wiper malware, denial of service attacks against media and financial institutions across South Korea. Additionally, Lab 110 previously conducted financial attacks against banks globally. One of the most notable attacks was the DarkSeoul campaign, which destroyed thousands of financial systems in 2013 and resulted in outages at the top three television/media companies in South Korea

Lab 110 appears to have more than one motivation (sabotage, financial gain, espionage, etc.). This is because Lab 110 has three of its own subordinate units: Office 98, Office 414, and Office 35. These units support and execute some of the operations attributed to Lab 110.

As a subordinate directorate to Lab 110, Office 414’s role is to provide “information on overseas government agencies, public agencies, and private companies.” To accomplish this, Office 414 develops espionage networks and programs to support the RGB mission.

Office 98, which is responsible for collecting information, accessing, and monitoring North Korean defectors, including the foreign organizations/agencies that assist them.

Three Offices/Units share the third floor of the KWP Central Committee Office Complex building in Pyongyang, known as the “Third Floor Offices.” Strangely, at their inception, these units had no official name. Instead, each was referred to by the room number from which it operated (Room 35, 38, and 39).

Office 35, the External Investigations and Intelligence Department, is responsible for intelligence collection and analysis. However, unlike other components of the RGB, Office 35 collects information to produce internal briefings and reports to inform and advise senior leadership within the regime. Its mission focuses primarily on the ROK, United States, Japan, and several nations across Europe. Based on the information provided by a North Korean defector, Office 35 empowers a small but sophisticated and effective hacking group that develops malware and hack tools to acquire information on its targets used to build its intelligence reports

The mission of Office 38 is to manage the Kim family finances. Office 38 operates holding companies involved in both legitimate and illegitimate business throughout Asia to accomplish this. The holding companies allow the regime to acquire goods banned under current sanctions, such as cars, boats, and entertainment devices (TVs, stereos, tablets, furniture, alcohol, etc.).

Office 39 is responsible for laundering stolen money obtained by other offices within the regime. Office 39 works closely with Offices 35 and 38. Much of the funds laundered by Office 39 originate from cyber theft, fraud, and the production and sale of illegal drugs, weapons, counterfeit currency, and other black-market goods

On January 3, 2021, North Korea activated Bureau 325, a new organization within its cyber ranks. The new Bureau has a distinct mission from its peer cyber Units. Bureau 325’s only mission is to steal COVID-19 vaccine research and data.

There is a real threat in this. A stable Kim regime is dangerous, but a destabilized dynasty is a threat to the world. North Korea's nuclear weapons keep all parties at bay from China, Russia, America, Japan and South Korea. When North Korea destabilizes, any and all parties will be moved to take advantage.

That is where global nuclear wars begin.

You're watching the official music video for Dio - "Rainbow In The Dark" from the album 'Holy Diver' (1983).Subscribe to the Rhino Channel!