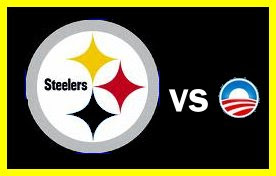 I wanted to take the time and do a comparison between Dan Rooney's Pittsburgh Steelers, as Mr. Rooney is an Obamaniac and the Obama administration to point out a few things in this years draft.

It should be an equal comparison as such Birdie Obama won the election and the Pittsburgh Steelers won the Super Bowl.

There though is the problem already in this, because the Steelers actually had the toughest schedule in football for decades. Their schedule amounted to their being in the Super Bowl every week they played.
Obama on the other hand, well he was put in the race to get the black vote out, then was chosen to punish the Clintons for certain globalist deals they should not have been involved and Mrs. Clinton was forced to take a dive.
On top of that the media was cheating for Obama, the referee system was all for Obama and Obama was funnelling in 300 million in illegal funds to build a better team.

So as the Steelers won the Super Bowl, Obama cheated and stole the election, as a foreigner not even in the American league.

To compare the camps of the Steelers and Obama, one notes that all of the Steelers have been paying their taxes and none of them have been plundering other people's savings.
Obama on the other hand has had nothing but crooks and Geithner is like the suction hose for Europe hooked up to bank accounts.

I do not see the Steelers running around and harassing people or making things up, and yet there is Obama's Janet Napolitano harassing Citizens and then making up that the 9 11 terrorists were from Canada.

The Steelers with their operations director, Dan Colbert, brilliantly in being the 32nd draft pick in the first round, chose a fantastic defensive end, who the Steelers had only met for 15 minutes, but that was all the Steelers needed, because he had CHARACTER in would work, do his job and not get into trouble.
The Steelers then traded their number 2 for a host of 3rd round picks as there was so much talent in the draft this year they would by God's Grace pick up 4 starters.

Once again in Obama's selections, the world has seen him apologizing for everything, allies are angry at Obama, enemies he chose to be friends are making a fool out of him and his choices for his team have the degrading problems of:

Leon Panetta at odds with Obama over releasing secret documents on terrorists.

Once again Eric Holder releasing terrorists into America and housing them in Montana.

Janet Napolitano being demanded by the GOP to resign for putting out policy papers which state Americans are terrorists.

As this blog pointed out last year, Barack Obama is the Ford Foundation Detroit Lions with Daunte Culpepper leading them to a historic 0 and 16 season.
Not to worry though, the Lions gave a 2nd grade, college quarterback a 6 year, multi million dollar deal without knowing if he can make it in the NFL.
No word yet if the Ford's are using Obama stimulus money to pay the bills or if they are just tapping into the IMF 1.1 trillion dollar Obama fund for Europe.

I honestly feel bad for Mr. Rooney as he has a psychopathy in thinking promoting blacks somehow solves anything and somehow makes you a better human.
I concluded his head coach was too young and Mike Tomlin was, but he thrived in the Steelers professional organization, because the Rooneys surrounded themselves with the best in football.

The Rooney's win, because just like the Miami Dolphins General Manager, everywhere he goes he just makes certain people make their blocks, do their job, show up for work and pretty soon you start winning games. If you do things right you will win most of the time.

This Rooney colonial racism is a bad thing for the world, because it does not promote on merit but on skin color. It ruins good people like Art Shell of the Oakland Raiders and it puts these horrid quarterbacks like Tavaris Jackson or Donavan McNabb into given starting positions when other people are better at the job who earned it. The same situation with Birdie Obama.

I like an NFL where people have helmets on because I don't have to deal with liberal racism.

I thought it was spectacular when Lovey Smith and Tony Dungy, two black men, were so successful and all I dealt with them was as men. Obama shows up and Dungy starts whining about race in promoting his book.
I'm so proud of Mike Tomlin of the Steelers in that race never comes up with him. That is they way successful people are. (It is cool too that Tomlin looks like Foreman on Fox's House.)

The Navy SEALS in rescuing Capt. Phillip, didn't dial up affirmative action and say, "OK now we need one black guy, one Arab guy and one white guy, because we have a black, white Arab in the Oval Office."
Hopefully, they dispatched their best and their best literally created their own orders for deadly force as Obama pranced around in DC and dispatched unsuspecting pirates.

That is they way the world should be and should operate, or else you end up with ruined people's lives in being humiliated in the NFL or dead people, because Obama is assembling a team of pirates as sloven, corner cutting and inept as he is.

Years ago a fine coach in Dennis Greene of the Vikings, racified his entire team from black coaches to black players. He had that team so warped that when he was fired, the black players went postal almost in screaming about racism.
That Obama type of colonialism still has the Vikings attempting to rebuild with sound players and coaches.

America faces this now with Barack Obama and the colonial liberals in Congress that they are so bastardizing the entire American system, that a Ronald Reagan is not going to be able to fix things in rescuing America again.

Dan Rooney is a good man, but he bears complete responsibility for this like all the bawling Harry Smith's of CBS. Mr. Rooney has to comprehend that there is no Dan Rooney watching Obama and his ilk in the White House to get them to perform.
There is only ilk watching ilk and the end result will be globalist Marxist Detroit Lions policy.

This is not a game, but a reality where people do not play by the rules in other nations and when you loose, you loose your entire nation and there is no "next season".

The Steelers win because they have professionals and all do their jobs for the good of the NFL. Obama is and will always be a loser, because he is a Marxist who robs people doing their jobs and the only person he is looking out for are the robber barons.