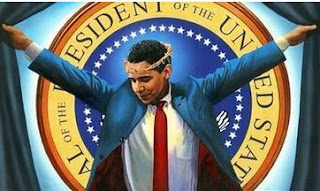 One of the most bizarre things in the bizarro world of Barack Hussein Obama has shown up commemorating his 100 days in office from a New York artist who wants to know in emails, "What is your truth?" as related by Drew Zahn of World Net Daily.

As you can see from the artwork it is Obama as the messiah, wearing his crown of thorns, parting the veil if the "temple" with and odd pleased expression on his face for someone mimicking what Jesus the Christ actually endured for all mankind in being beaten and bruised for our healing, and dying and laying down His life, and being empowered to take His life up again so that all believers would live with Him too.

What immediately caught my eye in this photo is something which is an exclusive here, along with another exclusive of something no one else has found.

I will reveal the second part first so no peaking at the end please.

Look at the words the artwork is displaying. Literally it is:

AL of the Esident of the UN ED STAT

That will mean little to anyone who does not have a Latin background in studies, but in checking the Notre Dame site translator in what caught my attention in AL is a Middle Eastern Indo European term as in Ba AL or ALlah for the moon god which Muslims transformed into calling God.
The Al or El prefix or suffix is all through English in the first kings of the Britons in Ethelwulfe to Albert.
It definitely means a god.

So what does this god OF THE ESIDENT mean?

In Latin there is no word for Esident, but if one takes the root word of SIDUS as the "e" as in E Pluribus Unum, meaning, we have e sidus dent.
Sidus means, STAR, so the word ESIDENT means, the STAR we See.

Combining this the phrase in English so far reads, God of the Star we See.

This then combines with of the UN ED STAT.

In Latin, un means "not" or "none", it does not exist or is fragmenting.

STAT is the meaning "res publica" or the public of a nation state.

AL of the Esident of the UN ED STAT

The god of the star we see of the performing the fragmentation of the nation.

Now for the first part which jumped out immediately to my God Inspired gaze in connecting the dots. 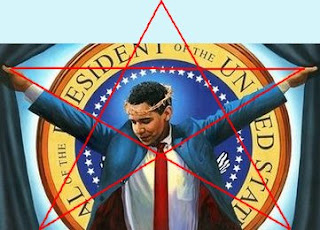 What I immediately beheld was the sacred geometry of Obama's backers in the infamous pentagram symbol which is part of the one dimensional power symbols these people put up of the Three Dimensional Tree of Life or Metatron's Cube handed down by one of the principality demons.

It really is of no concern to me if the artist who loves the false messiah in Obama knew what he was doing in creating a mingled Latin Angle Saxon phrase and then asking people to email him to answer the question, "What's your truth?" in a take off of Jesus the Christ as Thee Truth as these Obamaniacs bastardize the Gospel.
It's no concern if this is the work of the European globalist priests, nor have I inquired if this is God once again in his ironic humor making a fool out of the fools in posting before the world the Way God sees Obama who covers up the Latin Christ symbol at Georgetown denying the Christ.

I just find it fascinating in the precursor event Barack Hussein Obama is in initiating the antichirst which is prophesied in all the blasphemy Obama is a part of now has a portrait in New York acclaiming him in Latin as the false god of the satanic star symbol who is overseeing the break up the United States.