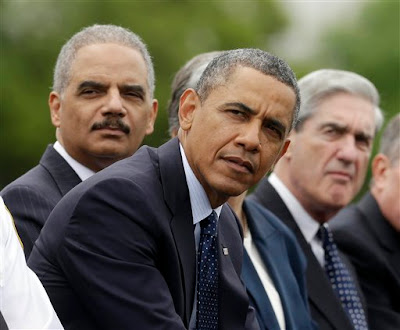 The most notorious of the Obama regime's cartel criminals, Eric Holder whose history is one of burning up children in bunkers to supplying weapons to Mexican terrorists to cover up hosts of Obama Birther crimes, is sufficiently concerned from his California lair, plotting the west coast frontal coup against President Trump to be desperate enough to tamper with Federal Investigations against coup plotters. 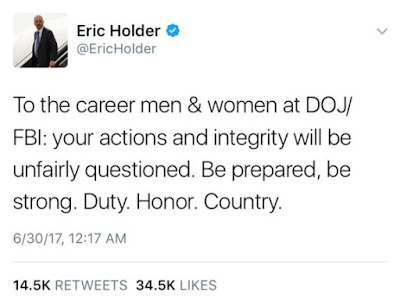 What is most damning in this is the knowledge which Representative Louis Ghomert provided to the public a month ago that it was Robert Mueller who engaged in a psychological brainwashing of the FBI, in removing experienced officers over a decade ago, to replace them with younger inexperienced agents, who could be influenced by Mueller and Mueller could "get things by them" due to their inexperience.
It was this group which James Comey overtook for his boss, being appointed by Obama, and which Obama and Comey then salted with a group of political minders like Andrew McCabe, who is now under multiple counts of investigation, and Senator Charles Grassley of Iowa is demanding the Inspector General examine the charges against Andrew McCabe.


Fired FBI Director, James Comey is under scrutiny for admitting he gave the contents of his memos to a friend who then leaked to the press. Comey also threw Loretta Lynch under the bus when he admitted in a testimony that she directed him to refer to Hillary Clinton’s email investigation as a ‘matter’ in order to downplay the seriousness of the probe.
Acting FBI Director, Andrew McCabe is also under Federal investigation for THREE different inquiries. As previously reported, Andrew McCabe is being investigated by the Office of U.S. Counsel violating the Hatch Act according to a new report by Circa News.


What we are witnessing here is a group of FBI leadership who arranged the murder of LaVoy Finicum, stonewalled for over a year the indictment of 5 assassins in Oregon, which answered directly to Andrew McCabe and James Comey, given complete cover by the DOJ's Loretta Lynch, in the hopes that Hillary Clinton would steal the election to make this all disappear.
This thee same henchmen and henchwomen that Eric Holder relied upon to with Robert Mueller, to create a political prisoner of Lawrence Sinclair in Mr. Sinclair's exposure of the real Chicago Barry Obama. Time and again Mr. Sinclair was threatened and the FBI refused to arrest the Obama terrorists stalking Mr. Sinclair.

Of course, Mr. Sinclair nor Mr. Finicum's sufferings are never going to be featured in the above investigations, but this is the extent of what Eric Holder was involved in, including the Lame Cherry exclusive of the New York propane tank bomber who Holder "tracked" for a day and then herded into an airport on the east coast, knowing the Muslim terrorist had an assault weapon in his possession.

For Eric Holder to crawl out from under a rock, and immerse himself in tampering with a federal investigation, in attempting to bully federal employees into silence by making them a "group of victims" instead of what they are and have been in a group led by heinous criminals intimidating the ranks to silence.

There is a pattern in all of this, and it began with Barack Obama tampering with the Hillary Clinton investigation, James Comey smearing Donald Trump, Andrew McCabe targeting Mike Flynn, and now Eric Holder attempting to rally the political minders, that "Obama and Company" is still out there in taking names, placing those names on enemies lists to retaliate against later.

It is beyond disgusting and anti American for Holder to term organized criminal assaults as duty, honor and country. That kind of duty, honor and country is a 5th Column of all the enemies of America. It is time for Attorney General Jeff Sessions to bring this to the attention of the US Attorney for a Grand Jury for the indictment of Eric Holder on charges of tampering with a federal investigation. Never before in American history has a former Attorney General attempted to influence a federal investigation to silence the federal police. Then again, there has never been anyone as criminal as Eric Holder in the assaults upon Americans during the Clinton and Obama regimes.

Holder has now emerged as a leader of the Obama Resistance, which just attempted a mass murder of Republicans at a charity baseball practice, and into this Holder is now impeding a federal investigation for his own overthrow of Donald Trump in this Nazi Holder seeking to be President in 2020 AD in the year of our Lord.

Eric Holder spoke Monday to promote a bill that some say would make California a "sanctuary state," the start of a new political phase of his career.

Remember Eric Holder, Obama's Attorney General. He down-played and lied about his and Obama's Fast and Furious fiasco, refused to prosecute Black Panthers for ...

It is time to indict Erich Holder and by 2020 have this criminal serving 20 years to life for High Crimes against these United States.