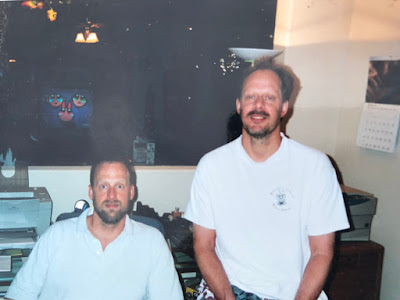 In not having high speed wifi infinity, the assessment of the shooting in Las Vegas is as incomplete as the refusal of law enforcement and media to provide the necessary data, in which would explain a great deal of this situation and more importantly be the interesting side of this story.

When I first read that this was an automatic weapon, I discounted  it  as neophytes are always terming guns assault weapons or automatic weapons, when they are instead SEMI AUTOMATIC or camouflage firearms.

That is why when I took the time to listen to the first burst from Stephen Paddock, I was surprised that was a full auto, and then even more interested when I heard the smooth slap of what sounded like a "vintage" American weapon.

I provide the links if you are rich and have endless high speed internet. The first is Paddock and you can hear that beautiful smooth slap of a vintage full auto. The second is a Romanian manufactured AK 47, and if you listen closely you will hear a metallic slap which is coarse.

Now for the beans in this.

That is what is missing in this, and law enforcement knows it. No one is telling you about the Class III if Paddock had such a special permit, and no one is telling you what these 10 firearms were, and if they were converted by Paddock or if he got his hands on some black market weapons, like Eric Holder in Gun Runner weapons.

That is what is of interest, in they are not telling you things they normally do to stoke gun control or smear Republicans and the NRA. This guy does not fit the profile structure, and in this clamp down on information, we are not being told even in "gapsing police leaks" about the origin of these Class III's.  That indicates someone is covering up the origins of these weapons, and that points to connections which have alphabet agencies.

Stephen Paddock's vocation was not one of mechanical or gunsmith abilities. So it concludes a purchase, and as law enforcement is not pointing fingers at who the seller is, that is an issue of are these more straw walkers in a sting gone wrong again or is it some group in the US or border, who are known to the authorities and they have not shut them down like at Charlottesville.

Too many questions are involved in this, but when I hear the smooth slap of a World War II vintage movie, I become interested.

As for Paddock, this was a turkey shoot. He would have not had any idea who he was shooting. He was spraying the crowd from a range his eyes could not pick out individuals. It explains the scratch shots in people's heads and how some were struck 3 times in the chest and survived.
This did not sound 223 type, but more the throaty growl of a larger caliber like a Grease Gun, meaning 45 caliber, 30 caliber or it could have been a 7.62 Russian, as the powder burn was more than the crack of the 223 American. But again, the sound was a slap in the video, no the metallic rough sound of an AK 47. That is not stating it could not have been, as concrete and bodies will muffle sounds, as much as distance.

Paddock was spraying and playing. Concentrated fire in a concentrated crowd produces this result. Whether the later video reveals sniping from long rifles is something beyond my budget in single well placed shots in the 10 minutes of this event.

It is what I have been warning of for years for people to stop attending mob venues, as those are the predatory grounds.

What is of interesting in forensic psychology is that it appears Paddock was in the room for days, in preparation for this concert. There is a reason he chose country fans for murder. The shooting platforms and two vantage points, was preparation in he was aiming at those people specifically. So this was not just a "snapped" decision. This was over a week in the making.

Until the important evidence is made public, which it is doubtful it ever will, the real assessment is never going to be of benefit to the public, as the question is why did Paddock target a country event which would be primarily right wing and where did these full automatic weapon or weapons appear from.