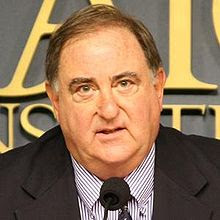 America Alone: The Neo-Conservatives and the Global Order published by the Cambridge University Press (2004), and The Silence of the Rational Centre: Why American Foreign Policy is Failing (Basic Books, 2007). In April 2010, his book The Beijing Consensus: Legitimizing Authoritarianism in our Time,


The man figured by thee FBI in the Trump frame up is Stefan Halper an FBI asset, but if one bothers to review who Stefan Halper is, this is not some FBI stooge. This is the face of the deep state in all of it's nuances in protecting a system and an agenda for the world which allows the illusion of political elections to drag a nation along to it's final solution.


Halper's associates files reads like a who's who of the Bush CIA. This is the Intelligence Financial Complex.

as Assistant to the Chief of Staff where he had responsibility for a range of domestic and international issues. During this time, Halper worked as an assistant for three Chiefs of Staff, Alexander Haig, Donald Rumsfeld, and Dick Cheney. He held this position until January 20, 1977. In 1977 Halper became Special Counsel to the Congressional Joint Economic Committee and Legislative Assistant to Senator William V. Roth, Jr. (R-Del.). In 1979 he became National Policy Director for George H. W. Bush's Presidential campaign and then in 1980 he became Director of Policy Coordination for the Reagan- Bush Presidential campaign. In connection with this position Halper's name came up in the 1983/4 investigations into the Debategate affair

Halper is home to thee two most exclusive gentleman's clubs in the world in London and Washington DC.

Professor Halper is a member of the Cosmos Club in Washington, and the Travellers Club in London.

The Cosmos Club is a private social club in Washington, D.C

The Travellers Club is a gentlemen's club situated at 106 Pall Mall, London, United Kingdom. It is the oldest of the surviving Pall Mall clubs and one of the most exclusive

The question is how does this unheard of man arise to such a powerful station? It is whose family he married into, in Ray S. Cline. Cline was the chief intelligence operative in the Kennedy Cuban Missile Crisis.

Halper is the son-in-law of Ray S. Cline.


Cline's associates are the who's who of Kennedy Assassinations and the Global Construct of American Projection around the world.

In the midst of World War II, Cline joined the Office of Strategic Services. He became Chief of Current Intelligence in 1944. He later traveled to China where he worked with other legendary OSS officers such as John K. Singlaub, Richard Helms, E. Howard Hunt, Paul Helliwell, Robert Emmett Johnson, and Lucien Conein. In 1946, he was assigned to the Operations Division of the General Staff of the United States Department of War, tasked with writing the history of the Operations Division.
Cline joined the Central Intelligence Agency in 1949. He was initially responsible for intelligence on Korea, but he failed to predict North Korea's 1950 invasion of South Korea, which began the Korean War. From 1951-1953, he served in Great Britain under the supervision of Brigadier General E. C. Betts. From 1953 to 1957, he was the CIA desk officer charged with monitoring the Soviet Union and the People's Republic of China;


If one notes Cline's position at the US Intelligence Board, one is witnessing the brain trust of the foremost minds of the American Deep State. Vernon Walters served on this board as the greatest intelligence and diplomatic genius America ever produced, and in that William Colby served, and he was assassinated. In other words, the group who oversaw American operations from war to assassinations had one of their own assassinated by their own group and no one said a word. 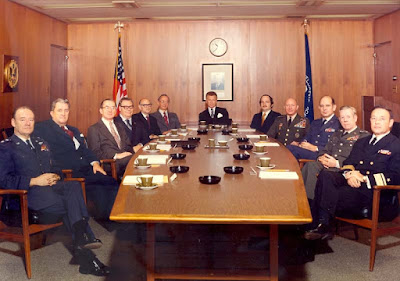 US Intelligence Board 1973 AD

So there appears to be a deliberate downgrading of Stefan Halper as just and FBI informant. Halper was pure intelligence on both sides of the pond. He was the heaviest of hitters and his mission was to plant information into the Trump campaign on Russian hacking the DNC files which was completely bogus, which covered up the murder of Seth Rich who actually copied the files for Julian Assange, and was mean to misdirect the attention from Clinton to the Russians for a future war.
Donald Trump was standing in the way of this coming world order and this secret society was moving to protect the agenda which had already been formed.


Stefan Halper was pure CIA in Obama form. He was not working for John Brennan who was managing this operation against Donald Trump. He was the conduit of Bush fam as it colluded with Obama and Clinton to unleash this maelstrom.

John Brennan has now been shown to have lied to Congress about this dossier in not being the source of this entire witch hunt.


Recently retired National Security Agency Director Michael Rogers stated in a classified letter to Congress that the Clinton campaign-funded memos did factor into the ICA. And James Clapper, Director of National Intelligence under President Obama, conceded in a recent CNN interview that the assessment was based on “some of the substantive content of the dossier.”

It is the fact that Peter Strzok was the author of this report which took a fake dossier and laid it on Obama's desk. Strzok was operating to supply Brennan with the data and Brennan was coordinating with MI6 to bring off this coup against Donald Trump.


Fleitz suggests that the Obama administration limited the number of players involved in the analysis to skew the results. He believes the process was “manipulated” to reach a “predetermined political conclusion” that the incoming Republican president was compromised by the Russians.
“I’ve never viewed the ICA as credible,” the CIA veteran added.
A source close to the House investigation said Brennan himself selected the CIA and FBI analysts who worked on the ICA, and that they included former FBI counterespionage chief Peter Strzok.
“Strzok was the intermediary between Brennan and [former FBI Director James] Comey, and he was one of the authors of the ICA,” according to the source.


Halper took the reigns in this to feed information to Trump staff which was tripping wires of Jewish and Australian intelligence, to feed it back to John Brennan. The associates of Halper have gone out of their way to marginalize him as a mole. He was nothing of the sort, but a full blown operations director in this smear against Donald Trump.
This is what this intelligence war has been about from the start of this in this element of the CIA being rooted out by the DIA.

Stefan Halper is the access point to the real power which was directing Andrew McCabe and assisting the Obama White House in this operation as there was not any division from the Bushcons and the Obamacoms. 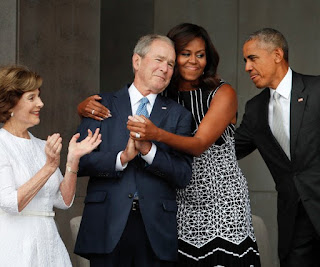