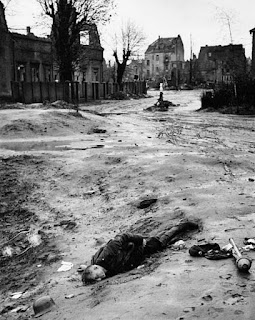 In real combat, battlefields ebb and flow. It is not as thee Americans have manufactured in massive assaulted, timed after weakening the enemy, and then bringing force to bear in driving the enemy back.

The following situation was typical in warfare where warfare was 100 meters apart on the Russian Front, the Soviets would attack the German positions which only had grenades, rifles and demolition charges, to the Soviet tanks, artillery and rifles.

The Landsers  would fight like animals, as the Soviet's would lumber on with their tanks after softening up the German lines, and the communist infantry would fight it out with superior numbers.

There was a desperate fight though in a unit of Landsers fought to their last shot and then surrendered in the number of five to kicks and rifle butts to them as the Soviets hated the German riflemen for their effective fire. There was not any Geneva Convention observed by the Soviets.

What followed as the Germans took the Russian trenches was an examination of the fire pits which the Russians had constructed, and one in particular which had the strangest gutteral sounds coming from it. A Landser yelled at the pit in Russian for the occupants to come out, and when no one appeared he sprayed it with machine gun fire, yet the gurgling sounds continued.

At last they looked in, and there were the five Landsers, with their throats not slit quite well enough, still gasping and in the throws of death as blood drown them and blood flow ebbed their life away.

There is much always pointed to in what Germans did in warfare. The reality is the Germans in most instances observed the Geneva Convention, until Soviet numbers became too immense to deal with as Stalin had allowed captured of five hundred thousand POW's at one point in the war, and the logistics could not simply deal with the numbers, and it was a matter of survival for clothing which stripped the communists.
For the communists though, their atrocities were not for survival, but were for absolute brutish murder. The Soviet's murdered Germans and took no prisoners. There are those who say that German deserved it. Remember that when it is your people againt Putin someday in how you are the invaders of Ukraine just as the Nazi's were and Russia was just defending her interests.

The Russians would blow off pieces of a wounded German for sport. The Russians would pull out their knives and fillet a German. None of these events were unique, but were a constant on the battlefield which all of you should be keeping in mind as this all must be revisited in TRUE history, in who the Americans and British covered up the Soviet atrocities of FDR's friend Joe Stalin and then allowed the Jewish propaganda to lie about Jew skin lamps and other inflated nonsense like 6 million Jews were killed by the Nazi's.
This blog has already stated that there was not enough time or fuel in Germany to incinerate 6 million Jews in the years of the war.

There was time though for this multi generation smearing of the German People. It is past  time that the realities of who the criminals were in World War II and after be known historical facts, from the mass murder of Germans in allied captivity after the war, the mass rape of civilians by Soviets, to the stealing of Prussia from Germany and giving it to the Poles.
War crimes still must be answered for.