Give em a Wallop 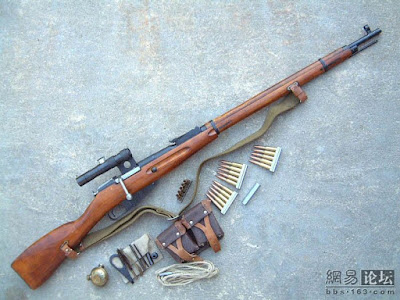 There is an interesting book which my friend Butch left to the world when he entered the great beyond which came into my possession for 80 cents, with the Anglo American title Sniper on the Eastern Front.

The back cover is filled with English hatred of Germans, but the inside is filled with the careful chronology of someone who actually liked this German Landser from World War II of the Reich. The artistic license of putting German thoughts into English is always a problem as the Anglo Saxons have a like mentality, there is not any way to convey the Deutsch, unless of course you were raised a German in the Americas in the immigrants there as you soon pick out phrases of Germans which are part of the American dialect.

"Give em a wallop"  to "That will put lead in your pencil" are all German and entered into the language from the American majority who were always Germanic Israelites.

In this, the Germans never referred to their snipers as snipers as that was an insult. They did not snipe at long ranges, but were in most instances under 300 meters. These were precision Marksmen among the Rifleman or the Infantry Landsers.

The principle Marksman  of SEF was interesting in how intelligent this particular 19 year old Austrian was, as he soon realized by day 5 in being wounded that he was going to die as a machine gunner, so discovering a Russian Nagant sniper rifle, he gained permission while recuperating to see if he could get out from behind that machine gun. He was good enough with the rifle to be moved from the lines to world of killing as a Scout. The Reich never had a word beyond Jager or Hunter, but in this case that is what he was in a Scout in thee American sense, in he hunted humans to save the lives of his comrades while scouting their positions for intelligence.

There was a Russian who had been killing German Landsers and the Marksman was called upon to end the nuisance, and not with a scope, but an open sighted 98 K Mauser at around 90 meters to the Russian lines, he had his boys lift a helmet above the trench, the Russian fired, giving away his position, and with the realization he had to kill this Russian, with the urging of this Landsers he killed the communist.

It was confirmed as the Germans stormed the trenches in the Russian panic, and discovered it was a teenager with a rifle who was killing everyone. The Marksman had splattered his brains down the communists back with bone splinters.
There was enough time to puke, get a friendly lecture and slight humor from a Sargent who told the Marksman if he got any puke in the flask, the Sargent would pull his noodle (cock) up to his top button.

With that the communists counter attacked and the Germans returned to their trenches with the reality that now over 1000 communists would now killed in the next few years by this one German sniper.

That is what is interesting in the Germans, in they only confirmed kills if a commander confirmed the kill. This Marksman would have confirmed something like 256 actual kills in the Gebrigsjagers or Mountain Troops, but in actual combat his perfect rate of fire averaged around 20 kills per Russian attack. It is never estimated how many communists this Marksman actually killed, but the Russians hated German Marksmen and would torture them when caught as they were that proficient.
This Austrian 19 year old was at this, in the thick of it every day from 1943 to the end of the war in 1945. I do believe that 1000 kills is on the low end, as some days the assaults were multiple waves, and these battles went on for five days. It is possible that he killed 200 communists in battle per week. These Austrians made those Russian Nagant rifles more lethal than the communists ever did.

In reading these German Austrians, they sound like Americans, as that is the shame in all of this as the majority of Americans have always been German Israelite and it was their identity, along with the Scot, French and Irish which predominantly produced thee American identity. That dry humor of rural America is not out of England. That is out of Germany.

General Patton was assassinated as he wanted to join his 3rd Army to these Landsers and drive past Moscow to destroy the communist menace. He understood the real threat, and that these Germans were of a mindset that Americans understood in thought processes as that is the people who built America from the farm up.
That would have been a glorious legion, with American industry, arming Patton's Germans and Germany's Landsers to slaughter the reds. It would have been lovely around August to have German U 235 obliterating Russian concentrations, to save Hiroshima and Nagasaki as the glowing communist would have illuminated the thoughts of the Emperor.

This though is not about a wonderful movie I would write and oversee for a Star Trek alternative, but about the first kill of a Marksman from puking to being comforted, in there is a vast difference between snipers and Marksmen.