Possessed by a 600 Pound Girl 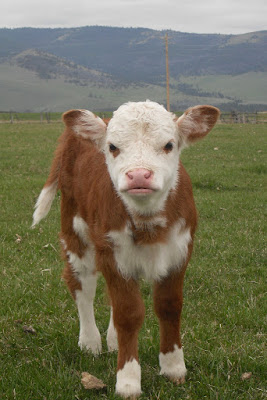 I have a confession to make in I am a genetic Spiritual mutant.

The proof of this is another example this morning.


See most people have dogs, cats, whatever, but in the brier patch, animals have me. It never starts out that way, but it always ends up that way.


See we had a calf which died after 3 weeks of treatment in the house, the living room to be exact, as she was like Stephen Hawking. Her mother is named Hannah. Hannah is a wee bit of a Hereford looking girl and she was quite wild, but now on the 6th week of milking her (need the milk for another calf with that cow's milk too) we had an episode  this morning.

The episode was not pleasant as it has been the Russian rasputitsa here in the west in it literally is a mud hole and slop everywhere.  So Hannah decided she was not going to go into the stanchion to eat her grain, but run in the pen, the shit pen like a crazed animal as the other cow decided it was nice to eat Hannah's oats and I kept yelling at her to get the something out of there.

We went around 3 times like this in this crazed heifer, and I told them I was ready to sell them all, but bore down on the idea of catching her again and made up my mind it was going to happen on the end of a rope that Hannah loves to avoid.........and then she stuck her head in the door, and let me put the lariat on her, and led her into the pen like an old plough horse.


Hannah was jealous of my milking the other cow.


I remember Libby in the rain as I was trying to treat a cut on Darby. I heard this squealing by my head and there as 1000 pounds of bulldog quarterhorse ass steak in the air and legs cocked, but no kicking as Libby was just jealous and expressing that. Lord we know to always pet Libby first or she has attitude times ten.


It does not matter if it it the Puntz. She will piss on my clothes just to mark me if another cat touches me outside. She makes an issue of baby calf peeing in the house, as now the Puntz can too.


I have always believed in children and pets that you have discipline, but not crushing discipline. I allow them to find boundaries and to develop their character. It makes for better animals when they can be who they were born to be. The problem is they always take possession of me and own me, and as in week 4 Hannah decided to run by and kick at me. She does that often enough so I know to watch for it. There is nothing malevolent in the least about this, as Hannah is just playing and  expressing in bovine conversation that she really likes me.

She stands now like an old milk cow in the stanchion. She is a really good girl. She just like all of these animals refuses to share me with anything else. It simply is the one flaw in my system of Beta communications in they are too fond of me and they get a bit too expressive with hoof, fang and claw sometimes.


It delights me to no end though to see an animal become who they are in character as their are things going on in their brains. We have this little fat cow named Bunty that TL is not fond of, but I am. Bunty is ornery as all get out. She did not try and kill me when I moved her calf, so that was a pretty good deal, but Bunty HATES being touched. That cow acts like she came off the Texas range. She shakes her head at me and when I water her it is DO NOT TOUCH ME, so I touch her and she really is getting more used to it, but it is just her don't touch me character.
Some animals like a black cow give wicked kicks and they get blasted for it, but then again I am not in possession of that cow as we have not had any together time like Hannah has learned.


Part of the problem is I do not have time in all I do, to just sit down or stand around and pet things as they should, but am trying to get things kosher around here in getting a place so I can relax a bit in what matters, as I still have to put halters on Bunty's calf, but the one in  the porch is doing good with TL babysitting as I get baby calf breakfast.


I see people who tease animals and break trust. I see people who wail on animals and those animals become broken. I see PETA types worship animals who grow up to be just as snowflake as those people. I see animals ignored and the lights never go off in them. I like what I do in talking to the animals. That baby calf was having a problem laying down in not figuring out it needed to bend it's front elbows, so one night I told it to do this and it did and there have been no problems since. Baby calf now runs and bucks outside to it's great delight, but is like an old dog on her bed in the porch. She knows how to turn it on and off and will do well in possession of us.


I miss not having the time to piss around with animals as my brother terms it. It has been exhausting work milking these two heifers daily, and feeding baby calves live and dead, but I enjoy it as that is what is in me and parts of me imprint on these animals and they are all acting like me for better or worse in they pretty well think life is a good thing with ample playtime in  it.

It would all be more enjoyable without a load of mud and slime to slip through, especially when it is "chase me to prove you love me" interactions as I am trying to get the milking done.