Sorry your Medical Transport is burning on the Runway 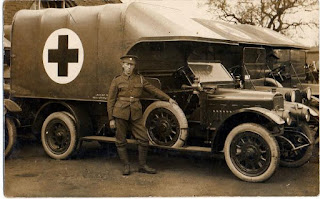 Americans have invested a great deal of money into creating an illusion in the military ranks of treating Wounded in Action survivors, not because the Pentagon cares, as budgetary wise, it would be better if these cripples all died. It is done as the same reason the German Reich rescued it's people, because it was good for moral and made your men keep fighting as they believed someone would rescue them.

Americans have this illusion too that their wounded always are helicoptered out within minutes and pretty nurses are holding their hands as lives are saved. My beloved Uncle in Korea, required a week by train to reach Tokyo, at which time his leg had swelled up black three times it's size, and he passed out from every jolt and woke up in agony in every new jolt on the Korean railroad.

With that we revisit the past of the Russian front for Germans in a Landser who was injured by bullet or fragment which blew a hole in his hand above his thumb. He could feel no pain, there was not much blood and he could move his hand, so he continued fighting with his MG machine gun.
After the battle the pain set in, and he walked  to the "hospital" for help which was a Russian thatch hut which had been overtaken.

The scene was filled with moans of the wounded and dying. One officer was brought in on a tent square and was moaning he could not feel his limbs. The doctor checked him out and a fist sized hole was in his spine and splinters of rib were protruding from it. Yes in real war, real wounds have all sorts of mystery about them and horror. The doctor said nothing could be done for him, and they sent him off the chaplain in the barn, where he and the others could linger on and die in God's care.

The Landser after 3 hours of waiting, sitting by another not sufficiently lethal wounded Soldier whose hand was dangling by tendons in almost being blown off, who sat their in shock, all awaiting to not see the doctor by a medical Sargent whose prescription was to examine the wound. clean the wound for objects, and then have a Lance Corporal hold down the wounded as there was not anesthetic, as the jagged meat was cut away cleanly and a nice sew up job would seal the Russian worst intentions.

There was not rest in a hospital for trifles like half your hand blown away. No the rehabilitation was two weeks of sorting captured Soviet weapons, with the pronouncement after two weeks that the wounded was cured and it was back to full front line duty again.

For all those who like the sound of war, just remember that America has not fought a war where she was pressed for sometime. All those fancy trinkets are available to save the dead, instead of them catching gangrene and dying weeks later while in a filthy shelter deemed a hospital. The first thing to go is always the medical units and they get attacked unmercifully by Eurasians and Latins to inflict the real horrors of war.

Real war is coming and it will come to real American landscapes one day with real American refugees in long lines as Muslims and Jesuits rape, plunder and murder Americans on their own soil, because these vermin were allowed into a Christian land.

The time to steal yourself is now in what a horror show a medical chop shop is, as a pit out back stinks of rotting trimmed flesh and limbs poke out like pretzel sticks.