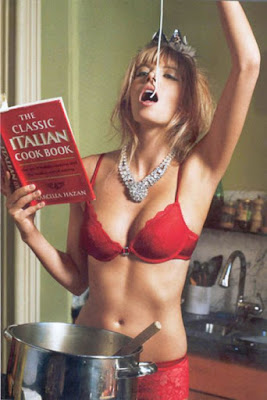 In association with the:

The Lame Cherry urges all to adopt a pan from psychotic women who take out their frustrations on homeware instead of poisoning their husbands or driving off cliffs with their children, as today you can witness I have  adopted two more pans. 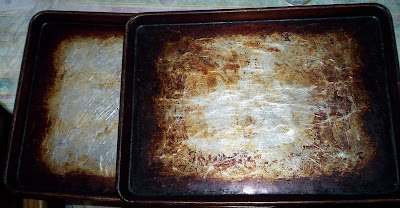 Yes, these pans were not in the pan section, but on the water jug, coffee maker and appliance section which includes DUAL BREAST MILK PUMPS FOR HUMAN FEMALES, and it is now doubt why they were overlooked as they were so black they looked like Toby's ass.

These are heavy mothers. I don't know if they came out of a restaurant, school or home, where crabby women were held captive, but one of these looks like a Bate's Motel incident took place as there was some heavy duty hacking going on, but the blade did not penetrate the flesh so they made good body armour.

I am delighted with them, but TL wants to scour them up and turn them into up town pans. That of course would ruin the purpose as there is enough burned on grease on these things that you could probably render out a year supply of OPEC oil in them
I am wondering if this was fatty chicken which was baked in mass as the source of this, as I can not reckon o how that much grease could catch on fire with cookies.

My adoptive children though were 80 cents each. Which is quite a wonderful purchase price as now I have those two big ass pans and then these two wonders, and Mom said I had some big shiny ones, which I have amnesia on, but why would I want new pans when I have these perfectly wonderful children to cook with.

I mean it is like being told you have Ivanka Kushner as a child in the front parlor, when you got instead two booger pickers on the back porch that you can have all sorts of fun with in catching night crawlers, shoot crocs in the head with a jacklight, drinking beer when Ma ain't around and of course pissing off the back porch to see how high of an arc you can make a rainbow out of. You know that Donald Trump never had no fun like that with Ivanka as she probably has never even touched a worm.

I got big plans for these booger pans, in about an hour they will be auditioning for Garlic Bread Toast, which will of course be placed at the bottom of a soup mug, filled with hissy pot roast beast, for a dream concoction I have been concocting, but have not gotten around to concocting it till now.

So friends, adopt a pan. Take it home with you, hammer it, wash it, and ........sorry hissy pot malfunction took me away in it tried to launch the weight to the moon. Always some attention getter these pots and pans have to make me show them that I love them.

So friends, won't you give, if you do not have it in you to adopt an unwanted pan to the PETP, People for the Ethical Treatment of Pans and the Pan Society of America, or you could just donate to the Lame Cherry as my tireless work is tiring in saving all of these abused and unwanted pans, who just came into this world all looking perfect, but in no time at all were sullied up and abandoned, as people heaped their angst upon them.

Remember, the pan you save might be your own