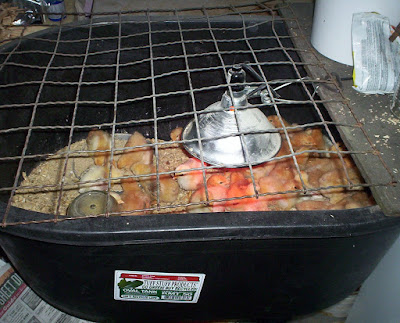 
This is one of the Lame Cherry million dollar informational posts again.

Years ago I built out of scrap plywood a box for my things, but it got converted to a chicken brooder. Meaning it was 4 feet long by about 2 and half feet wide. It really works good, but this year out of necessity with TL healing up, the option was a for a sheep tank in the 50 gallon size.

Our feed store guy had a really nice round sheep tank that was galvanized, but the store did not have one, and the one above was like 52 dollars and it looked like it would fit in our porch, so that is what I opted for.
We raised Red Broilers this year as the Cornish X are death traps. I was horrified when they rang up the price on these Red Broilers which I believe are nothing but the old Dassel Minnesota Indian River Chickens, which are New Hampshire and Delaware cross chickens that grow huge.

Any who, they are alive after a week, growing, pretty docile and I do not know if he ordered 25 or 30, but the hatcheries do not give many free replacements as that would be zero if we ordered 30 of these heavy chickens.

As you can see by a week, they have about filled the thing up. So this will hold 30 large chickens for week and probably 50 of the smaller Cornish Rocks.

Any way, I put in wood chips for the flooring. I do not put papers down with this, as I just scoop it out with a dust pan into a 5 gallon bucket.
I use a small plastic lid for the water, which they still shit up and get dirty. For feed, I was using an 8 inch cake pan to start out, as little babies need to get at the feed, and feeders are not good for that for the first few days.

One more thing, I ALWAYS when we get babies, I double dip them for water. Meaning TL takes them out of the box, dips their beaks twice in water (that would be sugar and antibiotic water) and then hands them to me and I do the same in the brooder to teach them where the water is. Water is very important with sugar and anti right away.

I just use a quart jar when they are babies and usually do it three times a day, along with feeding about the same time.

For the top, hardware stores usually have these 3 to 6 dollar 2 inch by 2 inch wire panels, and it fits nicely. As it was June when we got these chicks, and they are in a heated porch, I started out the first day with a 75 watt bulb in you can see a reading lamp that clips onto things. It has to be secure as you do not want to burn the house down.
Chicks have to be warm for the first week. If they are puffing they are too hot, bunched up too cold. I have in there now a 25 watt red party bulb. Red keeps them from picking each other and the thrift store had them for 25 cents a piece, so it was a bargain.

As this is an old farmstead I found a plywood piece to clamp the lamp onto, and it works nice to sit little buckets of feed or antibiotic I will use on it as a shelf.

If I had the cash, I would get a new 150 gallon galvanized stock tank, cut a hole in for a door and put a tin roof on it that I could open on hinges. That is what I have now, except it was rusted out when I built mine and now the floor is gone. Saves cleaning as you just move the tank now, and I have a wire pen they can run in  when they get their feathers and range some, until I get them into the chicken tractor.

This is a nice brooder though to get baby chicks off to a good start and I like watching the things and having  them around. I would think a garage would be a good place for this too, again use some sense as if it is 20 degrees outside, a cold garage is not going to be warm enough probably even with a heat lamp.
Speaking of which this is not a heat lamp brooder as that kind of heat would melt the plastic. It is why I use the economical little bulbs starting out and then converting to the bigger stock tank brooder I have outside.

I like these Red Broilers, except for the price. I think in a week's time they have only peeped twice. If a chicken is docile and you have them warm and fed, they are quiet. They only peep when something is wrong like a baby does.
They generate a film of dust each week which is why they are going outside as soon as possible. I would have thought I could keep them for a couple of weeks inside, but it is warm outside and they are becoming poop machines, nothing like the Cornish X which shit like goose, but they are getting to the point of 2 day cleanings and in the big tank, it will revert to a week again.

Oh last thing, I have an old Texaco 30 dollar oil drum I set this on. I can not help you with that, but you should have this up off the floor as it is always colder on the floor and you want the babies warm.


I think if you had to buy all this from scratch, this would be like a 60 dollar brooder and it will last forever, is easy to clean and most people are not going to eat 30 of these big chickens a year.


I am planning on getting an incubator though, as I lost my outlet in the guy who hatched out the turkeys, his dad said NO MORE, as I guess he had hatched out 500 laying chickens and that was enough to deal with.

Plan is to see if I can put a Red Broiler rooster on some Delawares for hatching next year. Great plans, but that all takes cash and a place. 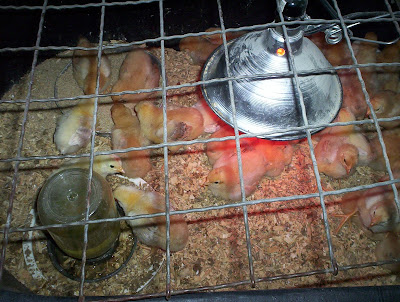