The Rhubarb of Pondering Thought 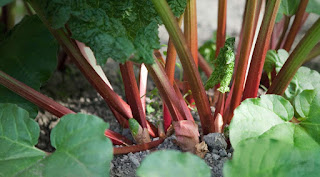 
I was thinking about my rhubarb today, and it occured to me most of it is named from the Gramma's I liberated it from, even if they were no relation at all. I believe rhubarb is one of thee most under appreciated garden plants in the world, especially since it was the answer to keeping scurvy away, as it came to Alyaska and America from our Russian heritage.

My Grandparents inherited their rhubarb from Gramma Dellie. That woman had a profound green thumb, and I still have her periwinkles, daylilies, some weed flower and of course the rhubarb.
Her rhubarb was what I grew up with and it has a distinct flavor. It is sour, part tanin and just the sprite rhubarb flavor it should have. Numbers of you are familiar with Valentine, which is watery, bland and rather smallish compared to Dellie's rhubarb, so you should have an idea of what I am writing about in flavor.

The original seed stock did not survive my two uncles on the home place. One buried the plantings under 2 feet of cow shit and the other just sprayed it to death, I believe, so I only have the originals of this type.
I never thought you could kill rhubarb, but them boys wiped out that patch and dug out a quarter mile line of rhubarb that Dellie had propagated. As the brier patch is some place where nothing grows, it is a testimony to her abilities.

I am guessing this stuff came from Gurney's Seed and Nursery out of South Dakota. I state that I got some green shit from them that ended up on a stock dam and is still growing there, which looks like burdock stems in it is that nigger green.  I never toss rhubarb away as you never know when you might need it, but these different genus are vital as each one tastes different and looks different.

That is what I was pondering in Dellie's rhubarb is 10 days earlier than Gramma Poll's. I think Polls is that Canada Red stuff which is a lovely sweet rhubarb which is pretty and is wonderful in strawberry rhubarb pies, but if you want something to cut through everything, Dellie's is the stuff that says rhubarb as there is no doubt about biting into that, even with sugar.
Dellie's is the stuff Gramma Irene's rhubarb pie calls for as she has eggs and cream in the custard, and you still know it is rhubarb when you tie into that.

I am quite phobic about my rhubarb though as when I was away at the metro with TL, that Valentine stuff went tits up. Thee whole shebang went deader than John Wilkes Booth at his hanging. As I have stated I did not think anything could kill rhubarb, and that stuff died.
Dellie's has been laboring along too, and I had to move two of her plantings as they were almost dying where they were. It is coming along again, but as I said I am phobic as if I loose this stuff, there ain't no replacing it.

Poll's rhubarb though  is different in that will produce with moisture into the autumn. Dellie's will just dry up and go into hibernation. Is the most fascinating thing as it just quits and disappears.

Amusing story about Dellie's in Gramma Lyd, had two patches of this stuff, one was large as elephant's ears in leave and the stalks can  get as big as a kid's wrist. Is mammoth stuff. Well she had this dink patch of Strawberry rhubarb as she called it....and which patch do you think ended up in my possession when no one was around to act like they liked the stuff.
Thing is, when I got that red rhubarb home, got it strated, I put on come manure dressing and to my consternation, that Strawberry was big as elephant's ears to in leaves. It was the same rhubarb, except one patch was starving.
I think soil type has something to do with red in rhubarb too, as even that Gurney's stuff is getting redder now after a  number of years, and Dellie's is pronounced as much as Canada or Chipman's Red. Something in the mineral content must be making the difference. It is nice to have pretty, but I would rather have flourishing and alive.
These are the rhubarbs when we get our place by God's Grace which are going into patches and ever increasing rows of them. Probably will put some rider on the deed that it can never be dug up or destroyed or the place gets handed over to someone else. 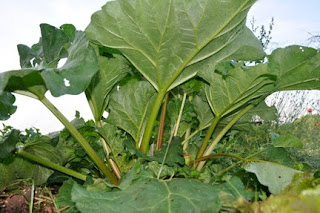 I could spend a many moon studying rhubarb. One of the things I want to do is raise a number of plants from seed to just see how things would go with them in true to parent type or mutations.
It is just a point that I see that stuff in the grocery store looking all nasty and I think why in hell would anyone buy that chit when you can grow it if you have a 2 foot by 2 foot space. Then again rhubarb is now 10 bucks a plant which is nuts too, as once you get that stuff growing, in 5 years you will have half a dozen plants, and if you are good at it like I am in  snitching off sucker plants with a spade, you keep the mother plant undisturbed and producing and you expand your patch. I got 5 additional plants last year off of Poll's plants and that is what is on the side of the garage, and they honestly look like 4 year old plants after one year as they expanded marvelously.
Still I can not use the shoots for 2 years as that is the rule in letting them establish and then using them the 3rd year, but they are all happy plants and will get some manure side dressing to really make them bling.

There are no answers  in this, as I was just pondering rhubarb, and would hope that people would not just sneer at it or disregard it as nothing to enjoy. I know most of the rhubarb now is cloned Canada Red or that crappy Valentine, but if one can find an old patch, that is where the real rhubarb is which Americans knew back in the early past century. It is all so diverse as to the time period it arose. Poll's is much more smooth. Dellie's is thicker skinned and that Gurney's stuff has like little ridges on it and fur.

It is why I cherish rhubarb as something that looks the same, is not in the least, and if you find old patches of it, it is distinct to variety as it sits there ignored and abused.

Ode to the rhubarb, the once medicine to American pioneers.