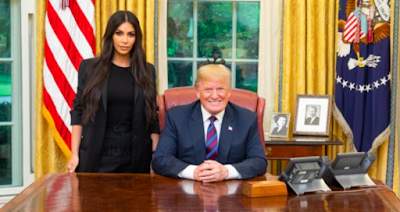 This exclusive will be short, but it expands upon the Nigger Courtin' of the New Trump Party which Mr. President is building to the exclusion of Christians.

Remember Jared Kushner in his "prison reform". You may recall I stated this is about money as when the regime starts pumping money into rehabilitation, someone gets the billions to rehabilitate.
There is more though in Donald Trump with Kim Kardashian, as that meeting  produced the latest Trump pardon.

After meeting with Kim Kardashian West at the White House, President Donald Trump has granted the reality TV star's plea for clemency for Alice Marie Johnson, a 63-year-old woman who was sent to prison for a nonviolent drug offense, The Washington Post reported. Johnson has spent more than 20 ...

OK for the bones of this, Trump just pardoned another Afroid. This one was not about an oversexed Black man raping White women, but this one is about an Afroid who laundered money, was a drug Queenpin who ruined hundreds of lives, and for this Donald John pardoned her for Kim Kardashian.

The reason Trump did this with Kushner is for the Black vote, but not any Black vote. This prison reform is for profit and for gaining access to several million votes for the Trump Party.

So you get this the Trump Party uses and I mean EXPLOITS White Christian Evangelicals and Veterans as their base, along with the genocided Americans of the vanishing Middle Class. The infusion in this though who get the seats at the table are leftist Jews.....reason Kushner is there with Dersowitz as Donald John appeals to sodomites and Afroid criminals as this voting blocks.

Obama tried to get his Afroid prion vote in restoring their rights. Trump is now after this vote in pardoning the lot.
I am whispering this so you understand the Trump Card as this is the Lame Cherry exclusive. What do you think if Donald John for Kushner Rehab, issues a Jerry Ford BLANKET PARDON FOR THESE AFROIDS in prison just before the election?

You do remember that Donald John is displacing the Obama MS13 with his own Jew Street Mexicans and Blacks, so maybe this K Street needs it's best dope dealers back on the street to manage this entire enterprise again as you are aware that Kushner runs Mexican operations in the White House and runs Jew state operations, in that you got the dope and the hedge funds.

Are you not pleased that the Lame Cherry informed you what was taking place in jerking your heads out of your asses, while every one of your other media experts were telling you how wonderful you are in having your head up there.