The Difference between American Sniping and German Snipers 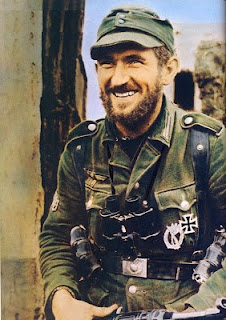 Their innocence was gone of life. What had taken it's place was the reality of death to sell out their life as hard as possible once death came.


The Landser of the German Army accepted in those who survived the winnowing process of war to become a professional for war was a profession of killing. It was kill the enemy or be killed. There was absolutely not any place for compassion or moral pondering. To do so meant the enemy would live and by living, kill the Landser or a hundred other Landsers.
It meant keeping your nerve when others panicked. It meant using your weapon with the precision of death like the claws of a lion raking the enemy lines.
It meant that a living song emerged within the instinct of living to kill, that the world was the position of defense, the position of being sheltered in withdrawal and attack to never being exposed.
The Landser never feared injury or death, as to fear what was, was to meet them and to ignore them was logical if they were arriving any way.
The Landser who survived was one of those natural selections of Darwin in war, for the Landser who survived was protected from wounding and death. No matter how hot the fighting was, the survivors always emerged from the steaming sulfured earth, because they killed more effectively than the enemy in their killing.


The Marksman of Snipers who survived were in a hierarchy of their own. It is one thing to be an American flowing in by helicopters, having night vision and 3000 yard 50 caliber rifles, with air power protecting above and the Muslim rats rummaging in the dark. It is a far different thing to shoot single targets in hours of waiting compared to the precision of a German Marksman facing wave after, wave, after wave after wave of Russians, now piling up dead in front of you in heaps, where the shots were at hundreds and thousands attempting to overrun your position, and that murderous wave must be stopped.

But how does the Sniper stop an entire battle plan?

Sometimes when it was a Russian commander who rolled up in his tank on your position and poked his head out, you blew his head off, thereby the leaderless Russians without command or commander were fodder for your lines, and when they returned the severe beating you gave them, took the fire out the second assault which ended in retreat too.

Other times it was a more precise set of protocols.

Shake the enemies moral by allowing the first three or four lines of attackers to advance.

At 300 meters begin firing precisely into the last wave, gut shooting those attackers. The screams of these wounded would unnerve the frontal attackers which would falter their advance.

As the attack faltered, at 50 meters head shoot the now stopped attackers to force a panic in retreat.

As the stampede ensued kidney shoot the routed troops to further drive the panic to unnerve the entire enemy by this groups screams.


This art form was waged to perfection by the German Austrian Mountain Troops. The Marksman could tally 20 hits at each assault of this kind, but in the German Army these were not counted as individual kills as this was not sniping but line warfare. Confirms were only in sniping with the word of an officer. Artillery officers refused to acknowledge the Snipers as the Landsers always stole the better equipment of the artillery officers for their own purposes.
For each 10 confirmed kills, a Marksman was presented a 7 centimeter long silver cord which was sown to their sleeve.

60 Riflemen of the Mountain Troops guarded the German withdrawal against immense Russian odds, and these Landsers stopped the Russians time and again. This was 3rd Gerbirgsjager 144 Company 7's work in the effectiveness of precision rifle fire as a psychological weapon to stop entire divisions advancing toward the West.

Some might recall the Hollywood spew of "Yeah they gut shot one guy in order to draw out others to rescue the injured", but that was like comparing an American frigate in 1812 to the defeat of the Spanish Armada. There is a vast difference in warfare between Americans sniping at long distance at single targets and defending a position against mass assault in using your weapon as a weapon of mass psychological and human destruction. The real test of a Marksman is being under heavy fire, by superior numbers, knowing death is certain and turning that wave of assault back daily.

Whenever you see the praise of these SEAL canoe choppers into bin Laden's brain or these Brad Cooper lurkers, remember there is a huge difference to being on a front line, taking fire and dispensing fire at your own peril.
One is sniping, the other is the craft of the Sniper.