Independence Day is about Spatulas 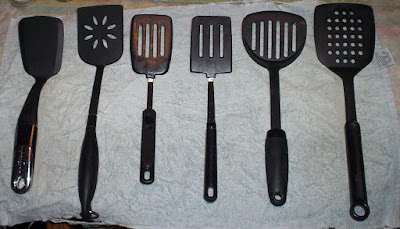 Few people realize that the American Revolution began over spatulas in King George dictating which spatula American women had to cook with and American men could beat their wives with. It is a nasty thing to be ordered to only have one spatula as the wife beater was too big to turn pannie cakes, because American colonial women all had big asses, and if you tried to beat your wife with her favorite spatula, it left too red of marks on her butt like a rod as that rule of thumb stuff in beating your wife with only a stick the size of your thumb still left too big of welts. So now you know why all of this came to a head on 1776 AD in the year of our Lord in men wanted a big spatual to spank their wives big asses with, while not leaving too much damage for make up carnal relations later and women wanted a spatula that they didn't need a #47 Wagner to maneuver around in as they stood outside the kitchen turning hotcakes.

I am not one who is much on non stick, for the simple reason is other people are so noxious to the pans in destroying them, that they always are in a toxic state. We did though pick up several on the quarter sale over the past year, and one I use for eggs for breakfast every say in a small pan.

This though is not a Cooks Country review. I mean who would think that a group of creepy people you would not want in your house for real, if you too Chris out would produce two shows of really creepy people, you would never ever want in your home, would be the source of corporate genius, but then look at Roseanne eh.

Sorry had to load the photo so I could remember what is what. The spats are ranked best to worst in left to right. Brand names actually were better.  Mother had one 4th one, but that damn thing eggs stick to it all the time. It makes no sense but eggs stick to these spatulas like glue when they are cooking.

What I am not fond of is the genius idea of holes in a spatula. They get full of pancakes or eggs every time and then we have to wash it off, as in a curly kate to get that chit off. So the top spatula is the Kitchen Aide. It is not too big, has a perfect bevel and it works nice for flipping eggs. For some reason the idea of bigger is not better in spatulas, and bigger with slots and holes really sucks.

The next one is the one TL uses in the longer handled Farberware. I do not like putting it away as the handle is huge, but for cooking it is a good spatula, but the one next to it which we call Butch in honor of our dead friend, and who we romantically believe was part of his housewares which were dumped, is probably a second place finish, instead of 3rd, so you can get an idea of which spatulas are best.

That big honking one on the end just sucks. It is too big, the bevel is too high so you can't get under foods and it is the worst of the lot.

Shorter handles are better than longer handles. As stated slots have no purpose in they drain nothing in grease or oil as far as I have use for, and all they do is pick up gunk which has to be washed out.

And yes that is my ratty ass dish towel I have them placed on for the photo.

They all seem to have a past of people laying them on hot pans and burner and melting parts on the handle. It seems to be a malady of people like scratching off the non stick and then burning up the handles of the spatulas so they have sharp unpleasant edges.

I have not though had any bad burned hands experiences with the metal of the Kitchen Aide handle. Have not used it a great deal as we are waiting for our house, but I think some of these might never come out of the box as they are just a nuisance. I never thought that humans could screw up spatulas this bad, but these college boys really created some asstard designs

If I had my druthers, I would pick the KA and Butch and only have those types of designs for non stick spatulas, the rest just have problems or get the job done and then you got problems with eggs on the thing or the handles are too long and get in the way of the cooking.

That about wraps up the review, which collection cost about 2.40 and probably runs closer to 50 bucks if you bought them all new, which I would never do, as I am not paying 10 bucks for a spatula as it is a spatula not something nice like a gun, but then I would never pay over 300 bucks for a gun either, so really am a tight wad, but that is the way it is when you don't have the Trump donations as everyone thinks they can all be king now indulging themselves.