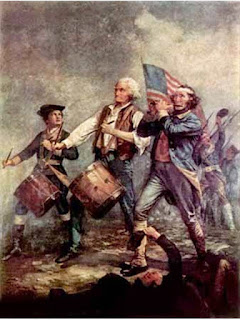 
242 years ago the Great Experiment in self rule was begun and in the process of greed in centralized banks and liberals, the Republic ceased to exist as a rule of law.

It was a generational process of Teddy Roosevelt central banking for Wall Street foreign interests, the socialism of Woodrow Wilson and Franklin Roosevelt, to the outright facism of Dwight Eisenhower, which culiminated in a series of despots after Ronald Reagan, which manifested the epitaph of America in a Birther Obama installed into 1600 Pennsylvania Avenue.

America is in reality an indentured state now, managed by nation rapists in socialized conglomerates, who install corrupt politicians to seize tax money from the Citizen, all protected by a police state which terrorizes the populace, in the feudal few rule and the mob being comatose from indulgences of sex and dope, are stupified to a reality that they are being replaced by foreign visa vermin, in the genocide of thee American Race.

So what do you celebrate on the 4th of July?

Your energy sold to foreigners and you paying the bill?


It is why I look for the return of Christ, pay my taxes, do not make myself a target and no longer support the fiction of America.