Rumors Rampant: John McCain not dead but Resigns on 4th of July 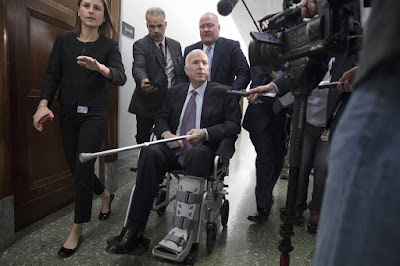 Why yes a man in a wheelchair walks with a cane
and if not I use it to beat children and puppies with.....

Well it appears that John the hero McCain has been blackmailing the Governor of Arizona into appointing his beer heiress wife to his Senate seat, while she is Ambassador to Brewland as appointed by President Trump.


Senator John McCain will resign his US Senate seat on July 4, 2018, says an aide who asked not to be named because he was not authorized to speak to the press.
"In the end, it was about Kennedy resigning from the Supreme Court," said the aide. "Confirming a (SCOTUS) replacement before the election is considered in the interest of the national Republican party, so that it doesn't become an issue for Dems to run on in every race," said the aide, meaning every race for Senate or Congress.


Now I would have picked Megs #NeverTrumper husband, but he probably is not an Arizonan, but then Obama was not American, so why not appoint an out of stater to replace John the hero McCain.

I don't see Cynd's as wanting the job, as she would have to work and have a million bitching Arizonans ranting at her. No Ambassador to Brewland would want that, as no one would vote for her anyway.

The only good sign in this is, is that McCain is now off his feet, and no longer cares with his friendly cancer to vote for the next Supreme Court Justice to replace Faggo Kennedy. That means the vote will be close, and McCain does not want to be blamed for stopping the appointment of the next Justice as part of his epitaph. Maybe John the hero McCain really is dying.......this year.......not from friendly cancer, but from being soulless or some other disorder that money can not fix this time.

I will not believe John McCain resigned on July 4th until I can stick my fingers in the nail holes in his hands or put my hand in the piercing of his side. That sounds familiar from history someplace, but in this case I am a doubting Thomas.