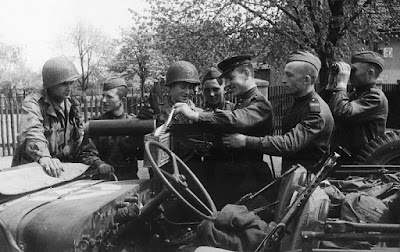 Most of you reading this, are not that ignorant in you have at least of American Lend Lease, which was democrat socialist Franklin Roosevelt's economic plan to enrich America and dump American war production on Eurasia. You have been taught to applaud this and you have built a massive memorial in Washington DC to Franklin Roosevelt, the grinning friend of communist Joe Stalin. You have this reality which you are pleased with. There is though the TRUTH in American lend lease which has  been exposed here as to what Americans who were rationed food and denied cars were actually providing to the Soviet communists under FDR, and the following is an example of thousands of examples.

Again most of you are most uncomfortable with the Truth and most are in denial, but until you face what was done in your name, from Joe Stalin to Birther Hussein Obama, your denials mean nothing, because you are an accomplice.


His name was Joseph Allerberger, he was an Austrian proudly serving in the Nazi Reich. His advancement had brought him to Marksman in the Landsers, an elite group of Mountain Soldiers who were in every major eastern front battle in the war and prevailed.
The location of this event was in a Hungarian town which the Russians occupied and the Gerbrigsjagers were fighting through in their retreat to try to save Germany from what was coming from the Asian hordes.

Allerberger was in a pile of rubble on a Scout when three American Willies Jeeps appeared, all new, all with a Soviet star on them and filled with 23 Russian communists. There was not war on these Russian's minds as it was never about war. This was about pillaging and looting as Stalin intended to reward his mongrel mob of leftists with stripping the lands bare that they went through on rapine.

The Russians were in process looting, and they became more aggitated as there was  not a great deal of loot to be taken, and that is when Allerberger heard gun shots from a machie pistol inside a shattered cafe, and soon appeared a husband who was around 50 and his young wife in her early 30's. The Russians hearing the gun shots, stopped throwing chairs out windows and shattering glass, and returned to the street, where an argument was engaged by all of them, over the woman.
At this point the husband understanding his wife was the focus, lunged at one Russian and was promptly smashed in his back with a rifle butt to the ground. He was then dragged to a lamp post and tied up.

As this was taking place, the screaming young wife was dragged by the Russians and pulled across the hood of the Willies Jeep, as the officer, a Lieutenant produced a knife, made crude remarks about the woman, and then cut off her underwear, dropped his pants and then savagedly raped the woman over the hood of the American vehicle while the Russians jeered and cheered.

Allerberger was just 35 yards from this mass rape as each Russian raped her in turn, until she passed out from the abuse, and sperm ran down her legs and onto the American made mud flaps on thee American Jeeps.
The gang rape took about an hour as the Russians finished up on the passed out woman.


The Austrian could do nothing and he hoped in vain that the advance of his Landsers would be entering the city and stop this madness, which in the young 19 year olds mind was both exciting and disgusting in the animal cruelty of war.
It was then that distant fun fire could be heard, but the Russians were unphased. It was the Landsers coming and Allerberger knew he could then return to their safety and gain assistance.

The Russians began packing up their loot though, but several Russians remained standing over the wife they had pulled off the hood of thee American Jeep and began to argue again. Two then spread the comatose woman's legs while a 3rd produced a flare pistol, shoved it up the woman's privates and then fired the pistol. A molten flame of her and the propellant erupted from her like lava from a volcano. This a  revived the woman as she rolled around on the street in absolute excruciating pain. Allerberger had never heard any woman scream like that in his life.

It took several minutes for the woman to die as Allerberger noted the first of the Landsers appearing 200 meters away. This was his first opening he had and felt he now could hold out for the Landsers to arrive, so he put a Russian down with a shot, and then put another down on the street.
The other two scattered and the Marksman was now most uncomfortable as the Russians under cover just yards away were firing into his position with great effect in almost hitting him.
The Landsers though rapidly advanced and a violent firefight broke out between the Germans and the Russians. The Germans soon though gained an upper hand in killing the Russians.

By some act of fate, the husband tied to the lamp post was not hit and the Germans untied him. He was incoherent, but revived for a moment when he noted one of the Russians was not dead. At that he charged into his cafe, ran back out with a butcher knife and in a frenzy of hacks, butchered the Russian which covered him in blood.

There was absolutely nothing the Germans could do with this poor Hungarian husband. They moved on past the carnage and left him cradling his dead wife in the street.

Normal people would have revulsion over this. A real American would be indignant that this was done in their name, as Franklin Roosevelt lied to them, covered all of this rape and murder up, as he deprived them of food and shelter in America for his war as he extended the Great Depression for his socialist polices in the same way Obama extended the Super Depression for his community organized looting of America.

Hillary Clinton for Obama overseeing the mass murder of Libyans with Colonel Khadaffi in laughing about it, prove that nothing has changed in the DC regime deep state. Those who do not stand up against this are the same inhuman class.
Remember that General George Patton was murdered for attempting to stop this red advance and to liberate Europe after the war.

This was American Lend Lease in what it accomplished.