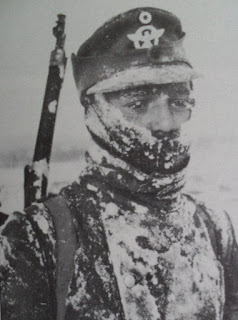 
Somewhere  in Eastern Europe, there is a German Soldier who is buried, who was tortured to death by the Soviet Union, who still has his rifle shoved up his arse to the back sights.

When Joseph Allerberger received a training assignment on Scouting and Marksmanship from his commander, Major Kloss, it was not for training, but so he could visit home in Austria as everyone knew that Germany had lost the war and it was probably the last time they would see family, as they would all die.

Allerberger was shooting a Soviet Nagant, a sniper rifle, and he had carved notches in the stock for every kill he had made and there were many. The rifle was given to a new recruit who was told to do justice to the rifle and not get himself killed by taking chances, and that everything would turn out alright.

While the Austrian was at home, the recruit disappeared for 4 days. He had been doing well, but had become over  confident. No one except his murderers will ever know what really happened, but the fact that they found the recruit bloated and with a rifle rammed up his arse, points to he did not get rid of his weapon if he was about to be captured as he had been warned, as the Russians always butchered Marksmen.

In knowing this, the scenario most likely was that the recruit was ranging in no man's land as was the requirement and he had either set a pattern or he had not gotten to his position before daylight, as it is deduced he was on the move, and a Soviet patrol instead of shooting him outright, lay in wait for him to continue on, and then sprang a trap upon him.
Several startling yells of HALT and HANDS UP would freeze a young man, and with that the Soviets would have had a prisoner to torture for information and as it was their policy to murder Landsers.

What took place typical in first beating the teenager. Then carving on him. When this was finished, the communists cut off his testicles and shoved them into his mouth, and then, the inventive approach of using the Nagant as a coarse murder weapon by shoving it up the rectum. As the Germans noted it must have been a horrible end, that took time and was excruciating. The reason being the anus had to be stretched and torn, the lower colon ripped through, the intestines, and this was all before the liver would have been reached. The rifle would have had to have been withdrawn several times and rammed back in with force as the rifle was  growing larger by each inch that it penetrated the teenagers body.

The end would have begun when the rifle barrel started tearing into the lungs and the heart. The first signs would have been frothy coughing up blood and then the end would be minutes away, unless an artery in the heart was torn loose as the heart is far to robust in muscle to be destroyed by a blunt rifle muzzle.

This would have been then why the communists stopped at the rear sights as they had penetrated as far as was possible without taking the head off.

The body was left in the open as all Landsers who were murdered were left for the Germans to find. It was statement of terror as that is what FDR's friend Joe Stalin was about in World War II as America looked silently on while making propaganda about how evil  the Germans were. The Germans were the civilized people in this, as civilized as the German Americans fightings FDR's globalist war for empire while being told it was patriotic.
Four days the body laid where it was, until a patrol discovered it, bloated and rotting with the rifle in the body cavity.

As Allerberger does not state the rifle was returned, it is a reality that the Germans buried a body with a rifle still inside of it. This would be in Romania, on the Carpathian front, directly before the Romanian army treacherously turned on their German allies and attempted to mass murder them.

This is a story and a grave which deserves to be honored.