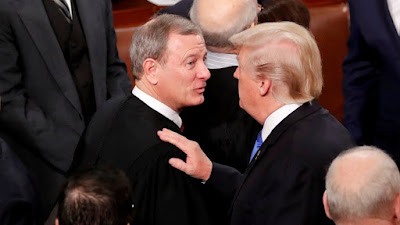 You have the smell of bunghole about you John Roberts


Chief Justice John Roberts today admonitoned the President of the United States for calling an Obama Judge an Obama Judge, as Roberts stated that we should all be thankful for an independent judiciary. The last part is unConstitutional BULLSHIT, but the first part is absolutely correct by John Bunghole Roberts.

AP – Chief Justice John Roberts is pushing back against President Donald Trump for his description of a judge who ruled against Trump’s migrant asylum policy as an “Obama judge.”
It’s the first time the Republican-appointed leader of the federal judiciary has offered even a hint of criticism of Trump, who has previously blasted federal judges who ruled against him.
Roberts said Wednesday the U.S. doesn’t have “Obama judges or Trump judges, Bush judges or Clinton judges.” He commented in a statement released by the Supreme Court after a query by The Associated Press.
Roberts said on the day before Thanksgiving that an “independent judiciary is something we should all be thankful for.”

See, there are not judges on the courts who are one presidents or another. What there are on the courts are treacherous scoundrels and Patriots. John Roberts in his Obamacare overthrow of the American Republic is of the former in being a traitor to the Constitution, while Sam Alito is a Patriot serving America from the bench.

A for the last part about Bunghole Roberts, the United States Judiciary is not independent. It is  currently a bought and paid for in the majority of decisions by enemies within the United States criminalizing Americans and destroying Christian Virtue.
The Judiciary is not independent according to the Constitution, in fact it is overseen by the Congress which can impeach any of these criminal traitors and should be, if Congress was not as equally corrupt. For that matter, just as Abraham Lincoln did  in writing out arrest warrants. the President or his cabinet can write out arrest warrants for any judge, send out the US Marshals, and drag them from the bench, to be tried by a military tribunal, and when convicted, hung like dogs for treason.

So Donald Trump is wrong, in America has Patriots and Traitors on the bench, but John Roberts is bunghole wrong in subverting the Constitution in stating the judiciary is independent. We all know there is no such thing as an independent judiciary from Watergate, Iran Contra, Plamegate or Pissgate, because leftists use these crony courts to subvert the Congress and the President.

There is a reality that the Supreme Court does NOT EVER attack the President, and John Bunghole Roberts just did. It is time the President as Chief Law  Enforcement Officer, as Abraham Lincoln was, swear out warrants for John Roberts to be arrested and held for trial before a Military Tribunal on the charge of sedition  against the President of the United States, the Constitution and the People of the United States.


Trump Fires Back After Roberts Rejects 'Obama Judges' Label
President Donald Trump fired back at Chief Justice John Roberts and accused "Obama judges" of disregarding the country's safety, hours after…
More than words Mr. President, deeds in the form of warrants to remove these scoundrels from the Courts to restore their integrity.