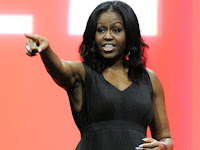 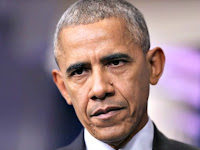 When Nigger is only 15 minutes of Fame

It is clear since the image of Birther Hussein Obama and the wife, Michelle Obama were escorted from the White House by Bill and Hillary Clinton's continuing legacy, and Beto O'Rourke proving the Designer Negro phase of American politics has passed to a new flavor, that the Obama's do not have a legacy issue, but a BEGACY reality of whining for attention again from the cradle of political exile.

Behold the Obama, he has only been involved in closed door speeches, appearing with David Letterman where no one cared, then moved on to public backing of democrats (ALL LOST) and now image Obama is still begging for attention, in trying to drag America back to the racist abyss Obama created in the past as America moves forward in the Trump future.

“climate change, education, agriculture and so on” — quite easily because they are “not nearly as complicated as they are made out to be.” The “reason we don’t do it,” Obama explained, “is because we are still confused, blind, shrouded with hate, anger, racism, mommy issues.


Then there is the beefy Michelle with her beef with Donald Trump in that typical noxious Michelle delusions, this time once again protesting America on foreign soil in launching her memoirs of Bemoaning Michelle in Barack Obama's nativity of England.


What is worse in this is Peggy Noonan who dropped her panties to get sullied up by the Obama's in 2008, betraying the Reagan legacy, as that Designer Negro was so leg tingling then, but Peggy is like the fat white girl, now 10 years older, and now just a fat old broad, trying to tell everyone how mysterious black sex is, when everyone knows it is just a fetish of sick little women who get wet thinking a Negroid sweating on them is a turn on as it is for them psychologically dirty sex.

I think of the legacies of Richard Nixon, in all he accomplished after he left the White House for the good of America and the world, helping Bill Clinton find success to the Reagan legacy. Then there was the combined charity work of Bill Clinton and HW Bush. Even misguided Jimmy Carter managed to build homes for the homeless, but with Barack Hussein Obama and Michelle Obama, their great accomplishment seems to be proving they are not as racist as George W. Bush cuddling with Michelle, as both whine about Donald Trump and wanting their legacy to be remembered by destroying Hillary Clinton.

It is beneath a former President and First Lady to beg for attention, but then the Obama's never have been American as their dismantling most of Chicago for an indoctrination camp to make up for the smallness of the people they are, is their begacy,  as America is now the racist hateful sewer that Obama birthed as the Chicago dope wars profane. Obama was the dope lord of the world in setting up new pipelines and  ran terrorism out of 1600 Penn Avenue, as Michelle did her utmost to betray the democrats who made Obama in Bill and Hillary Clinton and the Kennedy family.

The festering sore of the resistance, of Pissgate, of Black Chicago Bleeding is all Barack and Michelle Obama. They are criminals and there is not any mystery in that. The Obama's are the evil of all the characters which Jesse Jackson to Maxine Waters play in public, but shed when the political spotlight is off. For the Obama's they are the stereotype and the prejudice of the fiction they are the reality of the darkness of all politics, once it begins criminalizing the public and using the police state to destroy their own from Rod Blagojevich to Donald Trump.

The Fraud of the Obama's is something everyone has figured out. Those who wanted a Nigger Baby Doll for a present as it was different, have played with the toy and have outgrown it, just like all those children who looked up to the black help hired to raise them, thought those folksy words were so wise, until they realized it was just an 86 IQ adult telling a then child of no world experience common sense advice.
Peggy Noonan has lost her wet pussy for the Obama's, but is like the old whore who realizes what a damn fool she was going black, now wants to convince all the young girls to be like her and try black, when they have all moved on to a Beto O'Rourke.

So this is the future as long as the Obama's last. They will beg for attention. They will play the race, bigotry and hate deck against Christians and when it is democrats they will expect to be let into the White House family quarters to dispense some of that Nigger advice of all they accomplished, when it was white folks Chuck Schumer, Nancy Pelosi and Hillary Clinton saving the Obama's from their affirmative action selves.

It is time that the real touchstones of Africa Americanism in Frederick Douglas, Martin King, Frederick Douglas and Jesse Jackson be revered for what they brought to the civil rights of America, while the minstrel Obama act have their curtain call for the figment of a deluded public's imagination in their black face paint act.