The Nudity of Roger Stone's Arrest 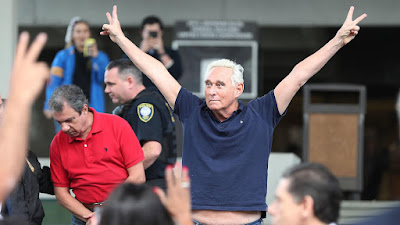 Roger you vixen is that a naughty tummy I see!!!


I realize the worship I have for all those sexy federal agents should not cloud my journalistic integrity, but it is most difficult when dealing with attractive men like Roger Stone and the leader of the FBI in the protector of America, Robert Mueller, to not show some bias in all of this.


The part I feel bad about is the nudity of the FBI agents who stormed Roger Stone's mansion, in their shirts were too small and their tummies were sticking out.

See back in country, back in the day, the potato peelers, the oil changers, the latrine crap burners all wanted to get their combat badge, but there was a reason that they were peeling potatoes as no one wanted them near a dangerous sweep. So to get them their medals, the Marines or Army would pile them all together before their tour of duty was up, and send them out on patrol, where most times nothing happened or a few got killed in an ambush, and the rest could go home and say they were in the war.

It just looks like in Florida, you know how it is with all that Jimmy Buffet Margaritaville that it is good times like Rundestadt in Paris. You got the beer, the good food, the AC running, driving home with your tootsies out in the SUV, and you just get a bit of a paunch, as the guys who go after like El Chapo or arresting Nicholas Cruz are staying thin, while the paper pushers and the supervisors never get out in the field.

So it comes down the pike in Robert Mueller phones up and says, "Hey I got this 300 year old man that goes gay parade down there and he is high profile, so go pick up him up."
Well you know everyone wants to be on this arrest as it is Roger Stone as the man is just fun to be around and he is quite a hunk, so all these El Chapo agents never get a chance to get a shot at Roger Stone, and these other guys and gals who need some dangerous time pay on their resumes get to go out and ride around in SUV's. Makes a great story for the kids or for telling cute young things in bars that you arrested Roger Stone.
You simply can not blame someone for having  too small of shirt as the last time they probably wore it they were out of the academy and it was 1500 beverages ago. So of course we are going to have a navel slip and it is going to be caught on camera. 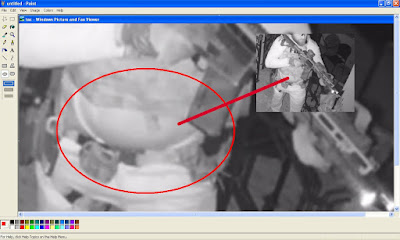 The thing is I just can not agree with the training that all of these agents receive now in these M 16's up on their collar bones. I see this all the time, and I know a 5.5 has zero recoil, but all the same those stocks get caught on your thermal underwear as too small of shirts that leave tummies exposed bind up on the shoulders.
You can see this poor agent below all uncomfortable with that shirt on, those big gloves, double lights like a Volkswagen, he probably was looking for the horn to toot on the gun in hoping Roger Stone had a drive thru for an early morning snack. 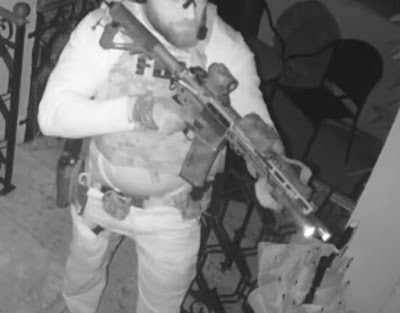 Roger though did seem prepared after he woke up as he is old as Rip Van Winkle, in he had on t shirt which I found interesting in it seems to say MISSING LINK on it. Of course Mr. Stone is not the Missing Link, but was probably wearing the t shirt to aid Robert Mueller's investigation to protect America, in appealing to the Missing Link to come forward and do their patriotic duty in letting authorities know who they are, as Mr. Mueller has been after the Missing Link for over 2 years now. 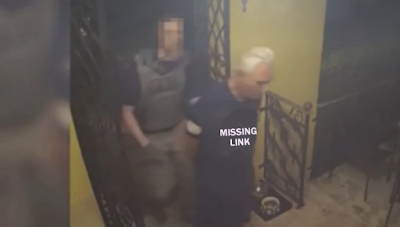 I was pleased to see Roger recovered nicely and most importantly he was escorted by very attractive DHS  or Department of Homeland Security agents. Here let me show you another handsome DHS agent. 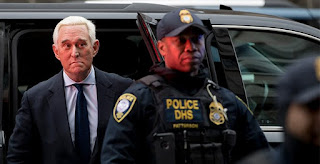 I know I was most pleased as an attractive woman in being interviewed by Matthew Goode and Yul Brenner. No there were not any tummies hanging out that day, as Yul looked like he had just come off leading thousands of brave young soldiers into battle and Matthew could of starred in any James Bond movie.

This is of course why Roger Stone is thoughtful and happy, as he knows as an attractive celebrity Homeland found the most attractive people to escort him into the building. 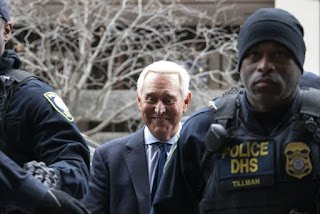 I do not know what I would have done if Roger Stone had been arrested with his shirt off or could you imagine FBI agents on the wet lawn in the pre dawn dewy morning wrestling in half undressed states, with nipples erect in the chill of the air, breath glistening in the floodlights of SUV's, as hopefully dogs were barking excitedly as helicopters circled overhead with the thump thump thump swaying. 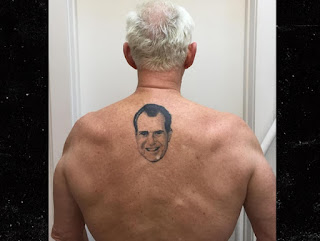 So while the Missing Link has not yet been located, we must not lose sight of the things which are important in all of this in first, agents who were in need of dangerous pay bonuses  and resume builders were able to go out and arrest Roger Stone. Secondly, the very attractive Director Nielsen of Homeland Security was once again able to showcase her most attractive agency and agents. Thirdly, this gives Roger Stone something to do, as close door meetings with the Special Counsel was not doing Robert Mueller or Mr. Stone any good, as keeping all that attractive male behind closed doors was not what the public was hungering for.

I thnk when the FBI arrests Ivanka and Jared, that instead of CNN, that Create TV should be alerted as let us face it, CNN's camera work sucks. I think all of us would benefit from Ivnaka in a pink negligee  flowing in evening DC air, with Jared shirtless and a nice blue plaid pajama pants, which would allow him to run away from the agents, and as they chase him, all of those rippling butts could be close up photographed, as they roll around in the pool of some neighbor, splashing, yelling and struggling is where this needs to go next in the search for the Missing Link.
I am not real keen on Don jr's arrest with his current old girlfriend. I sort of would like to wait until Alexandria Ocasio Cortez lands him, and what would be more fitting for PBS than Don in some leather chaps and Alexandria in one of his khaki hunting shirts with some cute pink bootie socks  in low cut leather jungle stalking boots.

All this will take is a bit of direction. I like Bill Norton from Tour of Duty as producer and Steven Caffrey did a really fine job directing the one episode, and we could work in Robert Mueller ripping off his shirt in the dewing morning air, and someone a combat knife between his teeth, would be a smashing photograph contrasted to Ivanka in her pink  Chinese silks.

I really can help this to Edward Lansdale successes, but they are going to have to plan this out a little better, and I am sure that the Missing Link will be phoning up Mr. Mueller and demanding their close up. I am sure I can work something out in like McCloud hanging on a helicopter going off a building. That would have real effect as it would seem knew to a snowflake generation. 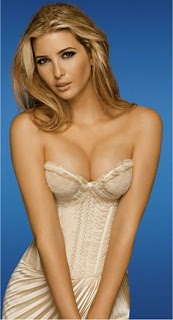 Oh Mr. Special Prosecutor, I just threw this on to pray with my Rabbi!