The Son of Perdition 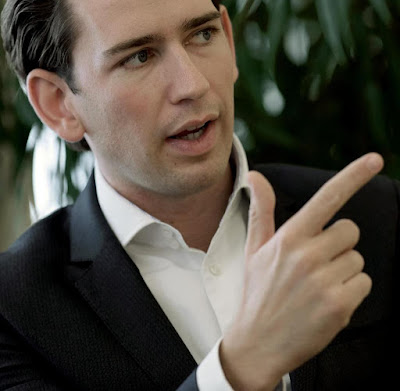 
In the winter of 1945 AD in the year of our Lord, 14 MILLION GERMANS were systematically collected and transported from Silesia, Sudetenland, Pomerania, greater Germany, including Sebastian Kurz's nativity, and dumped in the British occupation zone of Germany.

They had no money, clothes, possessions and were according to John Keegan in the last stages of deprivation. 1 million Germans died horrible deaths in this having their homes confiscated and driven from their homesteads, as this was Churchill, Stalin and Roosevelt's "Minority Solution" to CLEANSE GERMANS FROM THEIR ANCESTRAL HOMES.

Prussia and Prussians disappeared. Franklin Roosevelt and Harry Truman literally gave eastern Poland to Stalin, and Prussia to the Pole as Germans were eradicated there.

So you place this in context, Adolf Hitler and the Nazi's  made allowances for Jews. Jews were allowed to be German and serve in the Reich in numbers. NOT ONE GERMAN WAS ALLOWED TO KEEP THEIR HOMES IN EUROPE.

250,000 Germans died being expelled from Czechoslovakia.

600,000 million Germans died being expelled from the rest of Europe.


Article 13 of the Potsdam Agreement legalized the confiscation of German homes, property and initiated the murder of Germans.

Europe was returned 1000 years to the reign of Charlamagne, and Germans were cleansed from the Baltics, to the Balkans to even Germany.
The German population east of the Elbe River, was 17 million before the German Genocide. After the genocide it was 2.5 million.

This was not an easy removal for Germans. It was in winter. Germans had to walk across bays of ice to cross to ships. In this a Soviet submarine prowling these waters sank a refugee ship filled with 8000 Germans. Every German was drown and and buried in that ship. It was the largest casualty in the history of the world.
450,000 were moved by ships. 900,000 walked 40 miles in winter to attempt escape.

In war, 593,000 German men, women and children were slaughtered in American and British air bombings. 4 million German Soldiers were killed in the war.

Chancellor Sebastian Kurz is a son of Greater Germany. His family were homesteading pioneers in Europe making Christian settlements liberated from Muslim occupation of Europe. It was these Germans who were systematically destroyed by Washington, London and Moscow. This is in Sebastian Kurz's blood and the stories of  his  family and all Germans in the injustice of these crimes against them which have never been answered for.

The world hears a constant din of Jewish holocaust. For those who claim the Germans did this to the Jews so the Germans deserved it, if that is the legal case, then Jews deserve terrorism for their taking Philistines lands and repressing them.

All of this genocide of Germans is the womb which produced Sebastian Kurz. Kurz is the antithesis of Angela Merkel who continues on the Potsdam War Crime against Germans in raping them to death under Muslim foreign cock. Is the Truth about what happened to Germans such a threat that it does not deserve equal exposure?

Consider the reality of a future time where every German in the USA and Canada were thrown out of North America in winter, and all they had was confiscated and handed over to Mexicans and Muslims.

It is time the Germans had all that which robbed of them, including their lives is given the Justice which has been denied them.