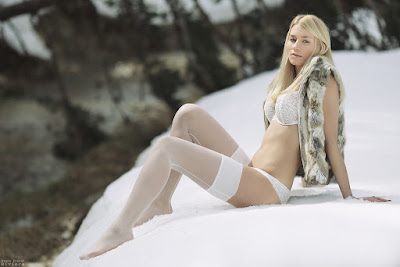 I did put on my winter clothes and I am afraid I will get too hot mother.


This is probably a mistake, but I thought I would share some pictures I took of the shit hole that the Brier Patch is in what we struggle through every day. As all of you will be ignorant in only seeing "snow", I will explain what real life is about, as this is not snow. 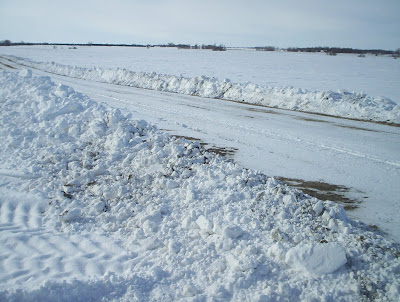 See in my part of the world, there is no such thing as pretty snow. It is always so hyper cold that we get snow dust, like Dirty 30's dust storms. Snow is a remarkable thing in this form and it packs in like literal concrete.
That is what the first photo of nothingness reveals in this is what snow looks like in 2 foot deep hard packs on the road as it is shattered by the road grader. Interesting story in yesterday we did errands and I thought the road was open as it was open, and then I noticed the snow started getting deeper, and then the damn drift trail was there, and then there was a 150 foot damned drift that someone had driven through, and I had to keep going at 40 mph, spinning and turning sideways, being careful not to flip the pick up, as it was either that or get hung up in that shit and have to try and phone a neighbor to pull us out.
I saw the blade on the road after we got home from a different direction. Apparently the snow had broken the road grader. That is how damned hard this stuff is. It also has to come off the roads or it will soften them to a quagmire and the big equipment here will dig 3 foot deep ruts in the road costing more.
I was told it costs 1400 dollars each time the blade comes out. In watching the blade come by here a fourth time, he was still chewing snow off the road in that snow concrete. 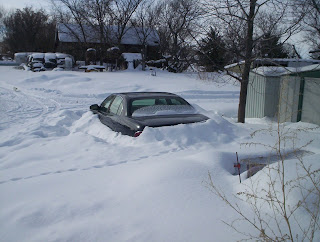 This is Zelda in the yard. I plan on starting Zelda so the battery stays up, but it has been 6 weeks of below zero temperatures and all this damned snow. Zelda sits as I would break her or leave her in the concrete snow she would get hung up in, so that is the wonder of the yard where the cats shit in the paths, and I run an obstacle course of trying not to get stuck in this shit even with a path scooped each time we go to town.
As it does no show it, the bladed out part of the yard has about 8 inches to a foot of packed snow under it. When the thaw comes, I will not be going anywhere as I will get stuck. I just hope it thaws quick or I am going to have an ocean in the yard and if it freezes again, it is skating on that shit for weeks. Having fallen in the driveway on this slick stuff. that is all I care to do with this stuff, as I type this iccles are crashing off the house as it "warmed" up in the sun is shining on the house. 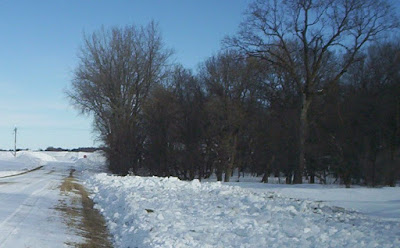 Next up is the corner, which like our yard, our trees, gets the full measure of greedy rich bastard farmers who leave nothing on their fields and it all blows off onto the roads and yards, so they can get into the fields early. I am hoping that I have finally convinced my neighbor who sits on the board here, to start assessing these bastards to clean out the roads. He did not want to make waves before, but as it is his tractor doing all this scooping now, he might be more open to it.
That little red thing in the bottom left corner is the stop sign. (yes in the middle of blessed nowhere I have to stop because boneheads are not bright enough to check if someone is coming.) (Note* I never stop nor does anyone else for that damn sign.)
It gives you an idea how deep the snow is which the road does not. Again, just look at your stop signs where you live and realize the snow I deal with is just under the bottom of that sign. It is a real mission to just get out of the yard, and to the highway, and then with the 2 wheel drive pick up to plot my course so I do not get stuck on a hill like I did two weeks ago as I did not time the traffic correctly and these putzing bastards have no sense any more for other drivers.
I was talking to Shellie last week and told her the mother died as she had not heard, and she had gotten stuck on a hill in town delivering meds from the pharm where she works. I laughed as she was so embarrassed and then the pill popper complained to the main company that the van was not suited for this shit, and they got a 4 x 4 to deliver meds. They were all joyous, but Shellie said, "You made me look like an idiot". They said, "Yeah but we got a 4 wheel drive pick up now to deliver meds, so it is great!". 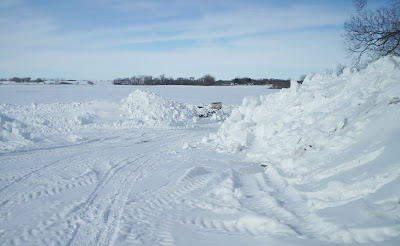 Lastly this is the driveway. I made that mail box contraption which tore the mail man's bumper off his car and the first year a payloader hit it scooping snow and it held together. I weld quite well as it is the mailbox 2 and heavy vehicles 0.

This though is what I face to Zelda's left in trying to get out of the driveway. I am driving around the big drift as it is like a stone wall which Trump can not seem to figure out to get built on the border. Again this will soften shit up and be a mess if it takes too long to melt.

All this HAARP kills things as we lost a baby calf last week, and that is after we did all we could for it. I am told that they are going to generate another cold blast to freeze the lower 48 out again as them Saudi's need to sell you fuel as they do not have enough billions in the American oil and gas they own.

This gets so damned old and when I think of the rich people reading this blog in all their comfort, it really pisses me off in a real fury God hears about as this is tough sledding in winter's like this when HAARP does not give one break for things to soak up some sun and recover.
It's shitty for the wildlife as I see it laying dead in the fields as they just freeze to death. Been noting the deer and turkeys have been moving into ranch yards and towns, as they are starving and the predators will not follow them into the yards. Well that is up to a point, as in driving home yesterday, I spotted a goddamn wolf, an ugly mutt brown color about a quarter of a mile near a tree stand looking, as that is where the deer and turkeys sun themselves. I would have plugged that bastard if some rich people had donated the money as I want a 243 in an old Remington pump. I have decided on that outfit, because the 223 will not buck wind that far out, and if I am going to be pasting big shit, I am not pissing around with a 22 250 or that hot rod 6 mm Creedmore fireblaster the target shooters are all hyped up about now. Just more shit rich people will answer for in what is coming on America in all the death they cause in their preening about how innocently wonderful they are.
I picked up 3 Vatican books yesterday. The right legger behind the counter was just gushing about the nun book in stating how inadequate it made her feel. Yeah I will show her inadequate as when we get our wood burner in which I have to build I am burning all that shit to save Catholics from that pagan religion of worshiping the dead.

Well time to wrap this fun up, which should please numbers of you thinking you have a shitty winter and now you are not alone in this American shit hole. I have at least the knowledge that the Russians and Chinese will never have this a landing zone to invade America as this would make the Rasputitsa look like a fag landing of fat Marines at the PX.