In the Din of Diversions of WWE Donald John Trump as President of the Ivory Crust of America, I read the non stop clapper reports in the right wing media of how Reagan like Donald Trump is in walking away from a nuclear deal with Kim Jong Un, but the reality is that Reagan Blue State America was prospering under Ronald Reagan when he astutely walked away from Premier Gorbachev's nuclear deal in the Soviet Union.


No Deal: Trump-Kim Summit Ends Abruptly: ‘Sometimes You Have to Walk’

The Conservative Alternative to the Drudge Report


I have had with the absolute lies that this Trump Economy is so wonderful and growing faster than expected, because I life in the real dollar world and I keep track of expenses and in the two years of Donald Trump after he agreed to allow the Nazi Conglomerates to fleece America, the Trumpflation across America is devastating Americans.
As I have noted here in watching PBS's Nightly Business Report that  there is something goddamn wrong in America when 950.000 dollar mansions in Florida are being shopped to Indian Curry Niggers doing codex programming and Americans can not even afford the shithole.


U.S. Economy Grew Much Faster Than Expected in the Fourth Quarter


Today in order to pay some bills I put in 10 dollars for a book of stamps as I have a hard time getting out in this HAARP terror weather winter which is coming from Mr. President's Saudi control of CITIBANK which owns the American debt on the oil wells which have been drilled, and cold weather makes Americans buy heating energy or they will freeze.
I got a note back from the mail man that the OBAMA FOREVER STAMPS, have now gone up under Donald Trump from 10 dollars to 11 dollars, so I owed the post office another dollar.

Donald Trump calls this his Trump Economy and Sean Homo Hannity gay parading in Hanoi keeps bragging about the stock market and the great economy of Donald Trump America, so they own this shit and it is Donald Trump's regime which just jacked up prices higher than Obama. I have kept a record here of prices under Donald Trump and this is what it is at the grocery store as of yesterday, as I have noticed there is an entire realignment by manufacturers ridding themselves of products for new more expensive packaging.

Bacon went from 12 dollars to 17 dollars.

What you are witnessing is Donald Trump apparently promised everyone in the cartel that they could rape from Americans  "his tax cut" and they have been jacking up prices on everything. The problem is in Blue State America which is the majority of America, is that Shopko, Kmart, Payless Shoes etc... have all gone bankrupt as Obama's Nazi Conglomerate centralized control from Amazon vendors is concentrating selling points in order to cement this monopoly.

The stress that Americans were under in the Obama Super Depression, has been added to the Trump 500,000 aborted babies and now 3 million plus more VISA VERMIN stealing every job that Donald Trump says he is creating.

For a Lame Cherry fact, the United States is running at a rate of at least 30% inflation under Donald Trump and in some areas it has eclipsed 50% inflation. No one reports on this shit, except here, as those are real prices in things I once grimaced  at purchasing, but there is not any way in hell I am paying 17 dollars for 3 pounds of bacon.

This is Donald Trump the National Socialist abandoning the American voters who voted for him and trusted him to emancipate them from the Obama gulag. Donald Trump gave these Nazi conglomerates trillions in tax breaks. Amazon does not pay a dime in taxes and the return on this, after employing beaners and Curry Niggers, firing White Americans and not hiring Black  Americans, that the NC's are just raising prices to finish off the American public as there are not any market forces at work here causing these types of spikes in prices.

The United States had 18 months to save herself under Donald Trump, and Mr. Trump in order to save himself, offered up Americans instead. The entire system is now imploding across Reagan America.


Tobacco farmers in North Carolina are in such dire straights that they do not know what to plant, after the hurricane wiped out their bean crops, because Mr. Trump's trade war with China is victimizing them as China is what buys the American tobacco crop.
Governor Kristi Noem of South Dakota, a real Republican who takes care of her citizens, has gone on record stating that Donald Trump's trade war is wiping out rural American Trump voting states.

GOP Governor slams Trump for his trade war that is crippling ...

In an interview with Politico, GOP Gov. Kristi Noem (SD) took a shot at President Donald Trump for starting a trade war with China that is devastating farmers in her state. According to the ...

Not funding space programs until America's potholes were fixed.

Promising that people earning under 50,000 dollars would not pay income taxes.

Promising that all of us could fill our taxes out on a postcard.

Stopping the Invasion of America

Promising Mexico would  pay for that wall


Those are just part of the lies of Donald John Trump as President. The fact is for Reagan America all they got was a Merry Christmas as Trump Scrooges robbed their stockings.

I am pointing all of this out as this is harming every person reading this and it is rotting the United States. This nation can not survive any longer like this. For all of Donald Trump's railing about the CIA asset Alexandria Ocasio Cortez's policies, what Donald Trump is inflicting on Americans will bring a Maduro Model out of Venezuela to every American citizen where they are all welfare trolls of the state, while the Mexican peon and Currycrat of India will work the tech jobs.
I point this out as apparently the only national advocate for Americans as this blog will not be diverted from the facts nor allow the Trump Clappers to place a Conservative Christian carte blanche on an autocrat whose polices are nothing but International Socialism making war on every American Citizen.
The Lame Cherry is not to blame for this, so stop killing the messenger for pointing out your impending doom. Unless this becomes a chorus it will continue until this is the last American generation, and this must be solved by political influence and ballot and not people stupidly acting out in threats or violence.

Each of us has to remember when Ronald Reagan did his Economic Package it worked and will work again. It only has to become an issue where the cartel once again agrees to hand out crumbs to Americans  for their survival.

Ronald Reagan instituted fair trade which produced deflation in order to prosper Americans. Donald Trump allowing the Nazi Conglomerates to unleash this economic repine will finish off the United States, with the natural death rate of White Americans, the aborting of Black Americans, the invasion 1.5 tan skins per year, their subsidized slave labor birth rates will turn America into the Venezuelan welfare state and the Mexican mafia state within 30 years. There will not be but enclaves of Whites who will be facing deportation as Whites were obliterated from in Africa just a few years ago.

And just remember my children, that this was brought about by the wealthy frauds who defined themselves as conservatives and christians, who refused to donate here as the only platform alerting everyone to what the realities of all of this were, because they protected their portfolios over America.

The Founders pledged their lives, their fortunes, their liberty for America.

It is now all staring at the green door. 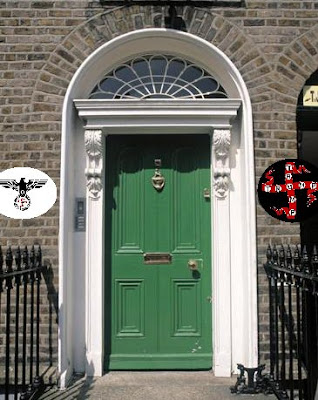 Watch the official video for The Cars - "Hello Again". The song was released in 1984 as the fourth single from the album Heartbeat City. Get The Cars -- Comp...