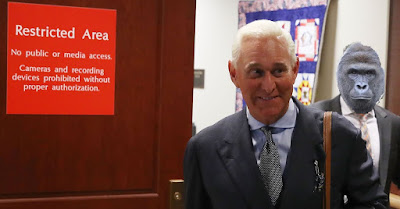 
In the continuing investigation of protector of America, Robert Mueller, there was a constant question from the investigation in who Roger Stone and Jerome Corsi were talking to when it came to Wikileaks. In that investigation though, it was never questioned about the connection which Roger Stone had to one of the largest massacres in United States history which brought forth the bi political David Hogg, in another strange platform and tale of wag the dog in the Parkland School Shooting.

Remember in this, that President Donald Trump began advocating for gun control, and then went on after another bizarre massacre in Las Vegas to ban bump stops, but review the following headlines in the time line and ask yourself why was Roger Stone helping to elect the democratic Sheriff in crooked Broward County and Robert Mueller would focus on Mr. Stone's associate who provided the money to place Scott Israel into office, which had the FBI ignoring the warning signs concerning Nikolas Cruz before the shooting as much as Scott Israel assisting in it. 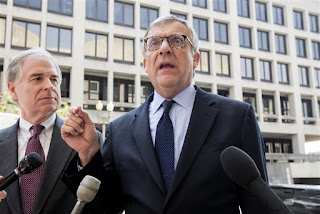 Special counsel Robert Mueller subpoenaed a former aide to Roger Stone on Thursday morning, the first time the aide’s identity has been put out into the public regarding the Russia investigation.
According to the New York Times, Stone’s one-time go-to guy Andrew Miller was called to appear before a grand jury in relation to Mueller’s ongoing probe.

It makes sense why Robert Mueller went after Andrew Miller as Roger Stone stated that he thought Miller was like a son with deep pockets, and those deep pockets involved themselves in various Roger Stone operations, including the election of a democrat Sheriff in Florida.


A longtime associate of Stone’s, Miller was once described by his political mentor as a “trust fund baby” who’s “like a son to me.”

One again, this looks like quid pro quo in Miller paid the money, and upon Scott Israel's election. Miller and Stone both benefited by to the victor go the spoils. It begs the question in all of the upheaval surrounding Parkland and how it became a national issue, just why Roger Stone and his link to Donald Trump never were mentioned by the left or right wing mockingbird press.
More to the point, as Roberrt Mueller's investigators were most thorough in every issue, according to Jerome Corsi in his past activities, and Paul Manafort who was investigated on Ukraine issues over a decade ago, just why was it that Parkland never came up in the Grand Jury nor the questioning of the Mueller investigation as this is the stuff that would bring indictments and impeach Donald Trump or primary him before the 2020 elections.

What is the worst political fodder in the world than dead children, and discover that a White House operative for Donald Trump was the person who helped get the guy elected who allowed the massacre to happen.


A little over six years ago, Miller donated $120,000 to Taxpayers for Integrity in Government, an independent third-party group viewed in Florida politics as sympathetic to Broward County Sheriff Scott Israel‘s 2012 election campaign. When pressed as to why he donated to said group, Miller said, “I was just doing my civic duty. Making the world a better place.” When asked where the funds came from, he said, “my bank account.”
After Israel won, the Democratic sheriff hired three of Stone’s and Miller’s associates: Dianne Thorne, Miller’s stepmother, Mike Colapietro, an author who co-wrote a book with Stone, and Miller’s then-girlfriend, Jennifer Hobbs. Thorne and Hobbs have since left those positions. After the resignations, allegations of influence-peddling increased in Broward County; it turns out that Thorne had an “unverifiable” bachelor’s degree. Hobbs and Miller later married.


This is a criminal issue as Governor Ron DeSantis of Florida, a Republican backed by Donald Trump for Mr. Trump's 2020 control of Florida in the presidential elections, has moved with all haste to remove Sheriff Israel and has launched a criminal investigation into Scott Israel.
Once again in this, no appearance of Roger Stone in the investigation, and with the links that this was Stone's and Miller's people who were involved in this Sheriff's department, not one word from Adam Schiff, Nancy Pelosi or Elijah Cummings in looking into this as they move to impeach Donald John Trump.

Sheriff Scott Israel removed from office after criticism of ...

There has been enough evidence provided concerning the alleged shooter, Nikolas Cruz to question that he was not the shooter. From being seen outside the school speaking with a Hogg girl, to not having enough time in being dropped off to get dressed and begin the massacre, all of this appears to be a frame up for a greater political issue which has been known for some time.
All of this looked like another manufactured event allowed to take place, and a narrative produced which would fit the political agenda of gun confiscation, and it has begun the issue of confiscating guns from Americans based on psychological accusations.

themillenniumreport.com/2018/02/valentines-day-massacre-heres-why-the-florida-high-school-mass-shooting-was-a-false-flag-black-operation/
FALSE FLAG PROOF: The following MSM video indicates the accused shooter — Nicholas Cruz -was talking to a female student in the hallway soon after shots rang out. Right after they parted ways, she heard more shots.

For those who need reminding, this Jewish boy, Nikolas Cruz was immediately attacked by Texas Christian funded Ben Shapiro and the ADL as an "AltRight" Nazi. When that narrative proved fake news, Shapiro went silent after going after one of his own, and Nikolas Cruz has been left to rot in prison awaiting his death sentence.
Nothing has been answered in Parkland as David Hogg whores for the bi media and time covers all memories, save that Scott Israel is being investigate by the Governor of Florida, but for some reason in all of these missing links  in Russian collusion, nothing is mentioned of a Slavic eastern European adopted children, from the same locality of Kushner vacations and Guccifer 2.0, in Roger Stone and his associates are the parties who helped elect the Sheriff who allowed this massacre to take place as the James Comey FBI sat on the reports concerning the threat of Nikolas Cruz. 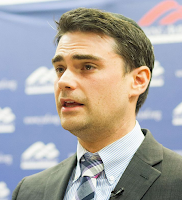 https://jewishjournal.com/news/nation/292774/adl-report-2018-fourth-deadliest-year-since-1970-for-violent-extremism/
The 50 deaths included the Tree of Life shooting, the death of 19-year-old Blaze Bernstein in Orange County, who was allegedly murdered by white supremacist Samuel Woodward; and Nikolas Cruz, who ...


Justice for Nikolas Cruz is justice for the families of the dead children of Parkland and the community, which have never received all of the facts. It is obvious  that democrats trying to impeach Donald Trump do not desire it known  that Roger Stone helped elect their  democractic embarrassment Sheriff which they have all Michael Bloomberg of New York rallied around for gun control, as this has Robert Mueller protecting the FBI in the stand down before Parkland, as no one wants to ask the people who were brought before the Grand Jury in search of the Missing Link in the Russian Dossier, about the same people being linked to the events which led up to Parkland and the aftermath which followed from those events.

https://www.libertyheadlines.com/nugent-rubio-gun-control/
Seventeen students were murdered by former student Nikolas Cruz amid a cascade of failures by Broward Sheriff Scott Israel and the Broward County School Board. Florida state legislators responded to the horrific tragedy by passing a red-flag law, which makes it much easier for courts to disarm gunowners.


Florida state legislators responded to the horrific tragedy by passing a red-flag law, which makes it much easier for courts to disarm gunowners.
Now, Rubio is reintroducing federal legislation to get other states to do the same.

You decide what is going on here as all I have done is post the links from online in this series  of events in another Lame Cherry exclusive in matter anti matter.