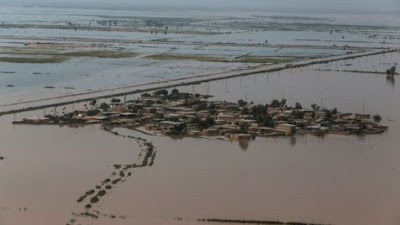 
In the 1930's, American socialist and communist admirer Franklin Delano Roosevelt, embarked upon a course of sanctions and provocations against the Empire of Japan, which ended in the terror attack on Pearl Harbor of December 7th, 1941 AD in the year of our Lord.

For those not paying attention to the devil in the details, there have been some not so easily provable events taking place in Iran, and some events which are directly connected to the United States policy of Secretary of State Mike Pompeo of the United States.

It is raining monsoons in Iran, like in the central part of the United States, when it should not be. The Iranians have taken notice of the monsoons, and more to the point that the Trump Trans has stopped all humanitarian aid to Iran over the destruction there, and the Iranian Foreign Minister is ranting in public defining the United States as an Economic Terrorist and Economic Warfare crime state.

Just focus on the words terrorism and war, as that is what the Iranians believe, whether it is true or not. 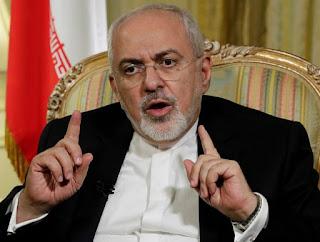 Flood-hit Iran getting no financial aid from abroad due to U.S. sanctions: statement 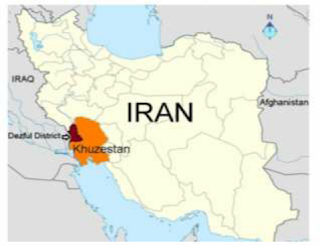 The area in Iran being deluged now for 30 days without let up is a drought zone. As it never rains in southern California, Saudi Arabia, Iraq, Southern Russia and Afghanistan are not known as humid climates which could produce these kinds of storms.
To the point, Iraq,  Afghanistan, Kurdistan, Armenia, Jordan and Saudi Arabia are not flooding, but the few farming provinces in Iran are being deluged. Yes this must be a Mahdi miracle.

According to climatic data, southwestern Iran receives desert type rainfall of only 17 inches of rain per year. Yet for some reason, Iran is having rains, while surrounding Sunni nations are not in this Koranical type flooding.

https://en.wikipedia.org/wiki/2019_Iran_floods
In March to April 2019, widespread flash flooding affected large areas of Iran, most severely in Golestan, Fars, Khuzestan, Lorestan, and other provinces.

https://en.climate-data.org/asia/iran/khuzestan-2094/
In گل گیر, there is little rainfall throughout the year. The climate here is classified as BSh by the Köppen-Geiger system. The average annual temperature is 24.7 °C in گل گیر. About 430 mm of precipitation falls annually.

So we have a desert region, with no other desert countries flooding, but Iran where their farming lands are located. Of course it is all coincidence in DC sanctions appear, and suddenly Noah deluges appear only over Iran in their farming regions, and that the United States has a forward based HAARP network in Abu Dhabi, which has been featured as creating super storms in the Mideast.

That to Robert Mueller would probably evoke a 2 and a half year investigation, but no one seems to note such things save this blog. Once again HAARP can not be proven, but cutting off humanitarian aid can be proven.
What also can be proven is the United States now naming the Iranian Revolutionary Guard a terrorist group. Of course they are terrorists, but when Obama had his Iran Spring, lured all those nerds online for the Guard to round up and butcher to keep the Mullahs in charge, no one save this blog made a point of that assistance to the Islamocommunists. The point is now that the terrorists are being named in Iran by Trump Trans, and more importantly these are the terrorists who have a history of shooting down American aircraft in retaliation for American actions, like TWA Flight 800 which Bill Clinton covered up.


US 'to label Iran's Revolutionary Guard Corps a terrorist ...

https://www.aljazeera.com/news/2019/04/label-iran-revolutionary-guard-corps-terrorist-group-190406061535338.html
United States US 'to label Iran's Revolutionary Guard Corps a terrorist group' The decision, rumoured for years, is expected to be announced by the US State Department as early as Monday.

So in review, the United States is sticking it to Iran over humanitarian aid. There is enough interesting links to conclude that perhaps the United States technology has been unleashed by the Saudis on Iranian Shia and American Protestants, with full Rothschild monetary assistance in the financial sectors. Coupled with targeting terrorists in the Revolutionary Guard, this all mirrors Franklin Roosevelt in the prelude to global war with Japan.
In past history of these situations, there is either going to be a Remember the Main event or a Pearl Harbor event as Iran is on the list of 7 nations to topple as noted by General Wesley Clark. The Iranians who are usually in outrage, have been in outrage for some time in goading the United States in taking credit for part of 9 11, and now Trump Trans has ventured to areas which Bill Clinton, George W. Bush and Birther Hussein Obama have not with Iran, because Iran is an expensive nation to go to war with as it has few hard targets, and Iran has a history of having nuclear weapons, which it has been practicing with for some time as a terror weapon.

As stated in this white paper, there are definite possibilities in this that those who desire war with Iran, have place Iran in a situation of holding a loaded an fired gun, which Iran pulls the trigger on or someone else will pull the trigger on, as Iran in Tavistock protocols has responded in due course, and it is a trend by the above that an event will be triggered, and Iran will be blamed, whether guilty or not.

As is typical in Franklin Roosevelt protocols, the event would have to be large, and provide mobilization and complete cover for whatever DC would then unleash, as 9 11 provided George W. Bush carte blanche to accomplish the cartel's desire which his advisers from MI6 London provided fake intelligence for.

I have not thrown for the Pur in possible dates for this in the trends as Haman engaged in, but logic would point to a near term rather than a long term initiation of a response.

They are fascinating dots to connect.