To Bring down Presidents and Prime Ministers 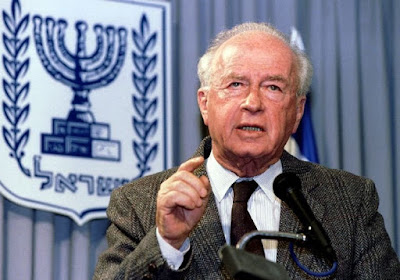 
In this Lame Cherry exclusive in matter anti matter, the following headlines concerning Prime Minister Benjamin Netanyahu and the useful media tools being led around, will make a great deal more sense when you read a 1986 account by Victor Ostrovsky of the Mossad in his book By Way of Deception, so that you too will not be led around as others are.


Israeli Prime Minister Benjamin Netanyahu to be indicted on ...


One man I ran into at this time was named Efraim or Effy for short, a former laision man to the CIA when he was stationed in Washington for the Mossad. Efraim used to boast that it was he who brought down Yitzhak Rabin in 1977, after only 3 years as the country's Labor's Prime Minister.


The Mossad did not like Rabin. The former Israeli ambassador to the United States, he had left that job in 1974 and come back to take over the party and succeed Golda Mier as Prime Minister. Rabin demanded raw data from intelligence, rather than the distilled version normally offered, making it much more difficult for Mossad to use their information to set the agenda, the way they wanted.

In December 1976, Rabin and his cabinet resigned, after he had forced the 3 ministers of the National Religious Party out of the government, following their abstenance on a Kinneset vote of confidence. After that, Rabin remained Prime Minister in an interum government until the national Kinesset elections in 1977 when Menachim Begin, became Prime Minister, much to the delight of the Mossad.

What had really finished Rabin, however, was a scandal, reported by well known Israeli journalist, Dan Margalit, shortly before the elections. It was against the law for an Israeli citizen to hold a bank account in a foreign country. Rabin's wife, had an account in New York with less than 10,000 in it; she used it when they travelled there, even though she was entitled as the Prime Minister's wife, to have all her expenses paid by the government. Still, the Mossad knew about the bank account, and Rabin knew they knew, but he didn't take it seriously. He should have. When the time was right, Margalit was tipped off that Rabin had a foreign account. According to Efraim, when Margalit flew to the United States to check out the story, he had supplied him with all the necessary documentation on the account. The subsequent story, and scandal, were instrumental in beginning the defeat of Rabin.

Rabin was an honest man, but the Mossad didn't like him, so they got him. Efraim bragged constantly about being the man who brought him down. I have never heard anyone contradict him.


For those who require a memory refreshing course about Prime Minister Rabin. He rose to become Prime Minister again during the Clinton tenure, and in making peace was assassinated.
The right wing was set up and blamed for this act, but others like Barry Chamish have always stated it was an inside job.

Put it this way, in the most secure nation on earth, with the most surveillance, a Prime Minister is approached and assassinated?

Just more for you to ponder about the lengths which have been gone to, to remove people who the elders of the Jews deem a problem.