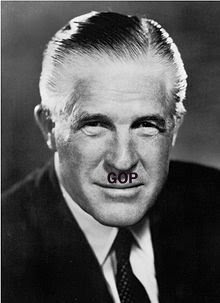 There has always been a Nazi wing of the Republican party, and by that I explain National Socialism, which is as old as the Whig and as current as Donald Trump, from the northeastern liberals. The Bush family were bagmen for the Rothschild banking system in America conducted by the Schiff cartel, and from this the old money and conduits gained control of the GOP in the war years, and were finally challenged by the Western or American or Conservative wing of the party in Barry Goldwater's challenge to another National Socialist in Lyndon B. Johnson.

Johnson was always blamed for the defeat of Goldwater, but the defeat of this Conservative, was not at the hands of democrats, but the National Socialists of the Republican Party, in a pool which included George Romney, the Mexican father of Mexican born, Mitt Romney.


He joined Nash-Kelvinator in 1948, and became the chief executive of its successor, American Motors Corporation, in 1954. There he turned around the struggling firm by focusing all efforts on the compact Rambler car. Romney mocked the products of the "Big Three" automakers as "gas-guzzling dinosaurs"

It was in this that dinosaur cars, became a talking point of this liberal, as in the fake of fossil fuels which emerged in the same talking points. Liberals on the right and the left, both joined in the brainwashing of America, because they could never win on their red agendas.

It was this group of Scranton from Pennsylvania, Rockefeller from New York and George Romney of wherever the Mormon grazing was deepest, that Barry Goldwater faced down at the Cow Palace, and would later be destroyed by in the campaign against the father of the modern Conservative movement.


George Romney, Scranton and Rockefeller were all from the moderate-liberal Northeastern establishment and Goldwater alone represented the arch-conservative wing of the party. Though Goldwater was easily the most controversial of the four, intent on overturning the party orthodoxy that had held control of the GOP since the 1940s, in 1964, at least, there was no stopping him.


Conservativism has always been blurred by academics to include the refuse of what are the National Socialists or Nazis in the modern era. They throw in pro slave John Calhoun with John Adams, who while they were both right wing, is bogus as Adams was a Federalist with Hamilton and Calhoun advocated "states rights". Ronald Reagan would meld the  two in this emerging doctrine in an attempt to curb the federal neutralization of rights, but always in this is the smear that the Conservative is now what they are by including what is always a liberal philosophy of negating the standard and making it into something it is not.

Clinton Rossiter, a leading expert on American political history, published his history of Conservatism in America (1956) and also a summary article on "The Giants Of American Conservatism" in American Heritage.His goal was to identify the "great men who did conservative deeds, thought conservative thoughts, practiced conservative virtues, and stood for conservative principles." To Rossiter, conservatism was defined by the rule of the upper class. He wrote, "The Right of these freewheeling decades was a genuine Right: it was led by the rich and well-placed; it was skeptical of popular government; it was opposed to all parties, unions, leagues, or other movements that sought to invade its positions of power and profit; it was politically, socially, and culturally anti-radical." His "giants of American conservatism" were: John Adams, Alexander Hamilton, John Marshall, Daniel Webster, John C. Calhoun, Elihu Root, and Theodore Roosevelt. He added that Washington and Lincoln transcend the usual categories, but that conservatives "may argue with some conviction that Washington and Lincoln can also be added to his list."

We witnessed this coup again in 2016 where the three liberals, the Nazi families of the GOP led by the Romneys, Bush's and McCain's who all funded by the cartel did their worst to defeat Donald Trump and elect Hillary Clinton, another socialist.

https://static2.businessinsider.com/mitt-romney-bush-trump-rnc-convention-2016-5
Mitt Romney. AP Photo/Richard Drew ... former Presidents George W. Bush and George H.W. Bush said that they would not endorse in the 2016 campaign and would skip ...

Mr. Trump has not been as independent as he claims though as his policies across the board have been nothing but the Obama community, the National Socialist, International Globalist state, which has nothing to do with Conservatism and all to do with the organized state making an enemy of the Citizen.

Ironically, Mitt Romney the liberal, has a mutant Donald Trump, who is of the same order as son of Nazism in America in Mormon Romney. The order wins no matter those they defeat in elections or those who end up in the Oval Office. It is a cartel of the same organized philosophy of exploiting the masses and replacing them with inferior DNA.

We live in a 21st world free of Americanism and held hostage in  the National Socialist gulag of the elite wardens.