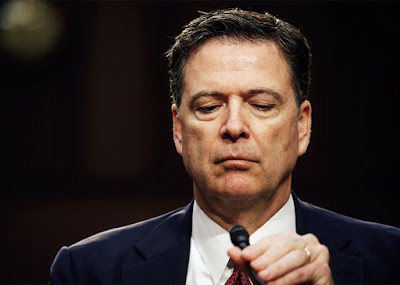 I will turn this mic into whine....


There is something deeply disturbing, even more disturbing about the fraud of former FBI Director James Comey, than his leaking of classified information to attempt to frame Donald Trump, and what appears now is a deliberate plan by Mr. Comey to so trigger the President, in order to get fired, so his friend, Robert Mueller would be made Special Counsel, in order to overturn the 2016 elections, where James Comey was not only protecting Hillary Clinton, but voting for her, as he fawned over Barack Obama, who had CIA Director John Brennan illegally running an FBI led framing of Donald Trump and others, all with the assistance of James Comey.

What has emerged with James Comey, is a pattern he thinks he is above the law. In his op ed with the New York Times this week, Mr. Comey has moved to dehumanizing President Trump, and terming him demonic, as some kind of vampire soul eater.
In all of this, James Comey has devolved to the worst form of Messiah Complex.


"Amoral leaders have a way of revealing the character of those around them," Comey wrote, highlighting the resignation of former secretary of defense James Mattis on the basis of principle. "But more often, proximity to an amoral leader reveals something depressing. I think that’s at least part of what we’ve seen with Bill Barr and Rod Rosenstein," he continued.
"Accomplished people lacking inner strength can’t resist the compromises necessary to survive Mr. Trump and that adds up to something they will never recover from. It takes character like Mr. Mattis’s to avoid the damage, because Mr. Trump eats your soul in small bites."


In Forensic Psychology, what James Comey is exhibiting is disturbing from a deeply disturbed sociopathic mind. The construct that James Comey has voiced is that Donald Trump is a soul eater, and at this point William Barr and Rod Rosenstein are zombies, bitten by the Trump Twitter fangs and they are now part of the undead, hanging from rafters and sleeping in coffins by day, fearing the light of James Comey's sun. 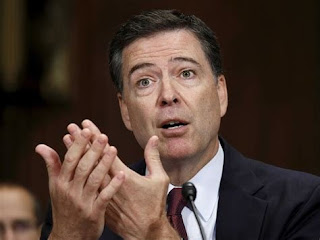 
Yes the last part is embellished, but that is what James Comey is stating below is Donald Trump is evil and has so consumed the wills of those around him, that they have become the same evil he is. The problem in this construct is the reality is Donald Trump cooperated with the investigation against smearing him, invoked no executive privilege, and, Rod Rosenstein is someone who gave Robert Mueller carte blanche to go after Donald Trump, but now that Robert Mueller has found no evidence of corruption to fit Comey's diatribe, Rosenstein is suddenly a creature that Donald Trump has sucked the soul from, instead of the same Department of Justice official who I thought should have been fired long ago for remarks against Congress and this President.

Comey becomes even more disturbing as in his last sentence he is telling William Barr and others to conspire against the President again, as Comey, McCabe, Strzok and Brennan did, as being seen on his team, but in that, Comey judges these Department of Justice officials as not as strong as he is, so they in selling their souls for filthy Trump lucre are in the end consumed by Trump the Soul Sucker.

"You are smarter than Donald Trump, and you are playing a long game for your country, so you can pull it off where lesser leaders have failed and gotten fired by tweet," he said.
"Of course, to stay, you must be seen as on his team, so you make further compromises. You use his language, praise his leadership, tout his commitment to values. And then you are lost. He has eaten your soul," Comey concluded.

This honestly sounds like the deranged ramblings of someone like Jim Carey or Alyssa Milano. That is what is troubling in the extreme as this was the person chosen to replace Robert Mueller, this was the Director of the FBI. James Comey not only had a gun, but a license to use it. He was directing hundreds of thousands of armed federal officials, and we know there is evidence as James Comey sat at the right hand of his god, that he could also be involved in FISA fraud in  lying to courts to spy on Donald Trump.

From a psychological assessment, James Comey is not sane. He has a Messiah Complex, a Trump obsession, and a sociopathic reality where his actions are legal, even when criminal, and all those who disagree with his Sermon on the Mount, are possessed like Judas by satan, in being lost forever to the hell fires of Donald Trump.

Honestly, James Comey needs to be psychologically evaluated, as he reveals he is not competent for trial when indicted, and should be committed to an institution where he would not be a danger to himself or others.
It is a huge disservice to the New York Times to allow a platform for someone deluded as James Comey is.

James Comey when examined belongs in state custody in treatment by an institution which deals with this type of psychosis. 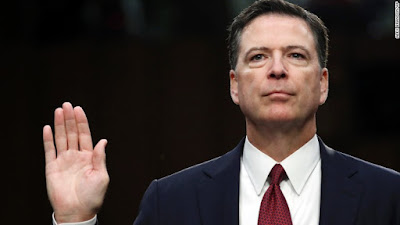