And the Lennon shall lead the Way 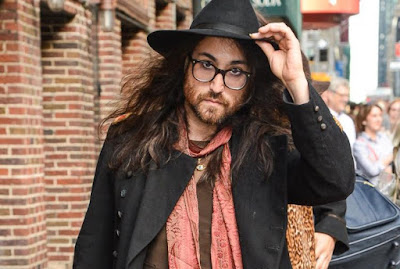 Sean Lennon, is actually a handsome man, even if he keeps trying to look like Johnny Depp on Pirates of West Indies.

He has had a difficult life of celebrity in being a child of open doors and money, and dealing with the fiction his mother had any musical ability, as a New York liberal, the silver spoon is difficult to feed a meal or reality to the children of privilege.

That is what is remarkable about Sean Lennon though as he is a person who erupted on Twitter castigating his liberal enablers for being the book burners of the modern age.


When I was young the most interesting people were left wing intellectuals. Believe it or not.
— Sean Ono Lennon (@seanonolennon) June 21, 2019


Yes when you are young and do not know any better, of course people challenging the rules are interesting, as the normalcy of John Lennon coming to America to escape British taxes and beginning to reject the failings of the left, has provided you with a John Kennedy open door pass, as liberals allow the children of icons all kinds of privilege who promote the Mockingbird propaganda of George Soros to increase prices, so the feudal few continue to economically rape the surplus population.

I agree with Sean Lennon in Tibet should be liberated from the gulag of Peking. Since Richard Gere started doing commercials for his geezer meal father, no one cares about Tibet, but then Sean has moved on to,  as his great drama was coming out against fracking.

Fracking is of course a threat to Sean Lennon's thinking, because that is what he has been manipulated with. Fracking endangers no water supply, because the oil shale is lower than the water table which Lennon does not contemplate.
He is correct that methane is a more dense product than carbon, but the thing is, the earth's atmosphere was more dense when people were living longer, and when it became less dense, people started living just three score and ten. The problem is though as earth stores methane in a natural process and the jungles for dinosaurs have disappeared when the methane was stored, so science has a proof that things were bigger and life was more robust when all that so called dangerous methane was in the atmosphere.

That though is another debate issue, as Sean Lennon has not answered the question in why he should have a life propped up by methane use for lights, transportation and recording studios, not having to get a job, or go in debt for schooling, with the rest of the people who can not afford high energy prices, because that is the cartel design to impoverish people, so they can be handled like the Chicoms handle people in Tibet to never be free.............is something perhaps Sean Lennon will ponder further, as he has been pondering things in how the left has in becoming an absolute power, with money, the media and position, is no longer progressive, but the very Nimrod cult which froze to death millions of Ukrainians, slaughtered millions of Cambodians and turned China into a Mao morgue.


Yes it is offensive that Sean Lennon hates Protestants and has no idea in his liberal elitism how offensive it is to call people Church Ladies as it is like calling Negroid out as Niggers, but he has been brainwashed that Christians are the group who are suppressing all that fun, which does things like does not produce sex diseases like AIDS or slaughter all the children in the womb, so capitalists have to import foreign slaves to make a profit in selling CD's to.

I hope Sean Lennon continues to become enlightened. Perhaps some day he will discover there is a difference between religion and Jesus the Christ, offering the Way, the Truth and the Life, which has evaded him and the liberals who are now looking at Sean Lennon as the Church Lady.

Mr. Lennon is going to find out if he keeps thinking, that the doors which were open to him, the smiles of acceptance from the pedophiles and peddlers of profit on his Wall Street investments are going to be shut and he will soon enough become a pariah, like that Jesus fellow.

I would love to work on an album with Sean Lennon. Would love to have his brother Julian play on my songs. I doubt that will happen like a big donation from this wealthy Sean Lennon, but I can dream things too as my experience in the brier patch is not the asphalt privilege which he was reared in.

I'm not against religion, because I think it serves a purpose in our society and it can be helpful to certain groups of people. But, for me, religion is mythology. ... I do think we all have a spirit, and I think there's a lot more to life and human consciousness than science can explain. But I prefer looking to science for answers because it can be tested and vigorously logical


I hope though for the best for Sean Lennon as he has dipped his toe in the most troubling waters of his life, in which he will discover who he really is and what kind of man he really is. If he ever wants to test his mind he can always find a place here as the Lame Cherry needs translation  into English, and it is good for trolls who think they know everything.