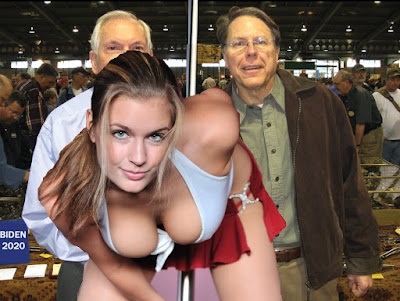 When Gun Talk's Tom Gresham, stated last week that the NRA was dead. a board member disagreed, but it turns out that Mr. Gresham was a prophet.


Today the NRA forced out it's top lobbyist in Chris Cox, who Wayne LaPierre in this purge of all who are not LaPierre cronies, accused Cox of being part of the "extortion" attempt to oust LaPeirre from the NRA for being an embezzling crook, joining with President Oliver North.

With North and Cox gone, the NRA is finished as Mr. Gresham stated. For the record, the "extortion" that LaPierre keeps ranting about was a letter, which was going to be published revealing all of LaPierre's embezzling of money in perks, and a strange episode in LaPierre having an "intern" with an expense account twice of what her apartment rent was.


Also gone is the firm Ackerman McQueen, which accuses LaPierre of owing them millions of dollars. It was AM who were trying to audit LaPierre to get an explanation as to what the intern LaPierre was housing, exactly what her job was.

Also gone, is the NRA's media arm in NRATV, which the Washington Post delighted in reporting was putting KKK hats on Thomas the Train and was no longer airing Second Amendment content.

It stuns me in the coordinated collapse of the NRA. This is by design and it is after spending 30 million dollars on Donald Trump, and after LaPierre tried to do the deep state in linking Russians to Donald Trump.

The NRA is nothing but an elitist group of gun industry people, who make more money with an anti gun President, who shuts down firearm imports from Russia, creating a monopoly to gouge American consumers. These are the LaPierre cronies and the NRA has gone effectively silent, not from liberals, but from Wayne LaPierre and his stooges on the NRA board who have not comprehension of what they have just given carte blanche to in this LaPierre coup against the American Citizens.

Honestly, Donald Trump needs to inform the NRA through the Attorney General that they will place the NRA into a receivership, and that board led by  Tom Gresham and none of these current board members, will clean up this self inflicted mess.

The first person who needs to go under criminal indictment if Wayne LaPierre as his spending and relationships with an intern make the NRA look like a pimp and whorehouse.

Wayne vs. Wayne: When the NRA Chief Endorsed Gun Control ...