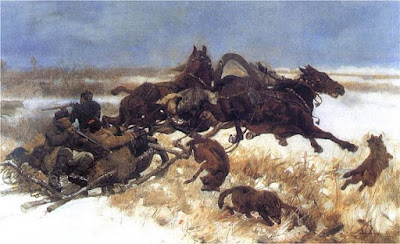 
Wolves were prevalent in eating the bodies of the 7th Cavalry and the horses slaughtered there by Indian terrorists.

The following are accounts of the Eastern Front in World War I, where wolf attacks, actually had the Germans and Russians, cease fighting and joining to kill wolves. 700 were eventually killed.

Just read study the following for the punchline.

In one of the messages of the newspaper Oklahoma City Times, it said, “Parties of Russian and German scouts met recently and were hotly engaged in a skirmish when a large pack of wolves dashed onto the scene and attacked the wounded. Hostilities were at once suspended, and Germans and Russians instinctively attacked the pack, killing about 50 wolves.”


The New York Times report for July 1917 describes this incident:
“As a last resort, the two adversaries, with the consent of their commanders, entered into negotiations for an armistice and joined forces to overcome the wolf plague. For a short time, there was peace. And in no haphazard fashion was the task of vanquishing the mutual foe undertaken. The wolves were gradually rounded up, and eventually several hundred of them were killed. The others fled in all directions, making their escape from carnage the like of which they had never encountered.”


In February 1917, there was a message from Berlin stating that large packs of wolves had moved from the forests of Lithuania and Volhynia to the interior of the German Empire.
A report, which appeared in the El Paso Herald, said, “As the beasts are very hungry, they penetrate the villages and kill calves, sheep, goats, and other livestock. In two cases children have been attacked by them.”
During the winter of 1916-1917, in the area of Lithuania and Belarus in the Kovno-Wilna Minsk district (near modern Vilnius, Lithuania), starving wolves began to attack German and Russian soldiers. Prolonged hunger and despair had become stronger motivators for the animals than their fear of people.

It has been cartel policy to not only breed large carnivores in the United States and Europe, but to actually reintroduce them and utilize them to kill wildlife to end the need for human hunters, and to train the human population to accept them as killers of their pets, children and livestock.

https://www.wolf.org/wow/united-states/minnesota/history-2/
Wolf Population Expansion in Minnesota. William Berg and Todd Fuller, Minnesota Department of Natural Resources . Wolves were bountied in Minnesota from 1849, when they were worth $3, through 1965 (when all bounties ended in Minnesota), when a bountied wolf pelt brought $35.

https://www.bbc.com/news/av/world-europe-44538965/wolves-in-france-farmers-fear-attacks
Does France have a wolf problem? Jump to media player One mayor says children under 10 years old should not walk alone, in case of an attack.


What do you think will happen in the advent of coming war, where high explosives, nuclear detonations, destroy infrastructures at a rate exceeding World War II. Infrastructure degrading from clean water to hygiene,  natural biological epidemics, and with all of those dead bodies unburied, will create a food source, which will expand to living sick, crippled, wounded and those making mistakes as in World War I.

Couple that with a population which has banned fur from the White House in New York Slovenian high morals, and the human population which is sedentary will face a canine as large as they are, can hear and smell 1000 times better, is always armed with fangs which can slash arteries and jaws which can crack femurs, in having a 200 mile range, and guns will be no match  for wolves,as wolves require traps, snares and poisons......and they still almost won against humans.
Add this to packs of wild dogs set free from their dead masters, and it is Prophecy come true.

And I looked, and behold a pale horse: and his name that sat on him was Death, and Hell followed with him. And power was given unto them over the fourth part of the earth, to kill with sword, and with hunger, and with death, and with the beasts of the earth.