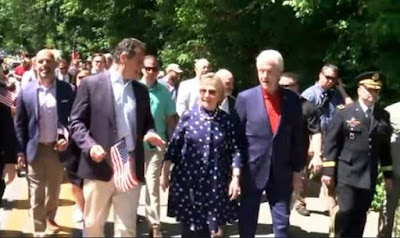 In the current upholding the laws of the United States, Attorney General William Barr with US Attorney John Durham, investigating the illegal intelligence operation conducted by CIA John Brennan, using the FBI as a cover and the Department of State with John Kerry as his smear tool, to frame candidate Donald John Trump, there is in the shadows of this  a damning confirmation from National Intelligence Director James Clapper to sodomite journalists, Andersen Cooper of CNN.
In this interview James Clapper explains an intricate part of this on a public forum, which is a legal confession of exactly what was taking place in the Obama inner circle.

To set this up, we know for certain how the Obama inner sanctum worked:

Vla-erie Jarrett was the political minder for the broad ideas of Barack and Michelle Obama on every subject, as to how to implement their overthrow of the American system.

When it came to security and intelligence matters, this trio of Jarrett, Obama and Obama, relied completely upon NSA Director Susan Rice. She was the go between, the wall of separation between  the Triumverate Obama and the outside world of the intelligence and security community.

When it came to Russiagate, and the Hillary Clinton / Jeb Bush / Marco Rubio Pissgate Dossier manufacture and distribution from MI6 sources, the operational director of his was CIA Director John Brennan, who with intelligence asset, FBI Special Agent Peter Strzok, used false information to trigger the FISA warrants which began the spying on Donald Trump.

In the wings of this, backing up John Brennan, was NIA's James Clapper who as privy to all of the raw material, as another propaganda officer as political minder at news outlets like CNN to carry the Obama message to the public. In effect in his so this gains some historic understanding, Barack and Michelle Obama were the Adolf  and Eva Hitler, with Val-errie Jarrett the Marxist role of Martin Borrmann, who in this Susan Rice was the Obama's personal secretary, who carried the message to Heinrich Himmler of the SS in John Brennan, who had his own Joseph Goebbels in James Clapper to direct stories to the media.

It is Clapper though who appears to not completely understood that he was carrying a message of absolute lies to the media, and John Brennan had drank the kook ade as Brennan believed everything the Clinton campaign manufactured for MI6.

Again, is is Clapper with Cooper at CNN, that blundered into answering a key question in this, not that Barack Hussein Obama was personally orchestrating the investigation of the framing of Donald Trump, but the highlighted portion below from the poor orphan girl.


Former Obama administration director of national intelligence James Clapper admitted that former president Barack Obama gave the order to Peter Strzok to kick off his Operation Crossfire Hurricane targeting of President Donald Trump.
Obama — who also gave a stand-down order on stopping alleged Russian hacking — was personally implicated in the plot according to Peter Strzok and Lisa Page's texts. Clapper confirms the obvious.
This is James Clapper's interview with Anderson Cooper, which confirms that Obama ordered Strzok to carry out an Intelligence Community Assessment (ICA), which became the basis for the entire Mueller probe.
"If it weren't for President Obama we might not have done the intelligence community assessment that we did that set up a whole sequence of events which are still unfolding today, notably Special Counsel Mueller's investigation. President Obama is responsible for that. It was he who tasked us to do that intelligence community assessment in the first place," Clapper said in his Anderson Cooper interview.


It is this last line in this report which explains everything and implicates Barack Hussein Obama in a federal crime.

President Donald Trump has railed about this in Obama did nothing to stop Russian hacking, and it has always been a mystery as to why Obama had issued an order which allowed the Russians to not only be implicated in hacking, but we know from detailed reports now that Hillary Clinton's Ukrainian computer security services planted Russian electronic fingerprints in the democrat computers and the NSA was leaving footprints in hacking into the American state of Georgia election computers. It is a confirmed fact that someone was spoofing a computer at Trump Tower out of Russia, in order to tie the Trumps to Russia, and now it all makes perfect sense in, the reason Barack Hussein Obama did not stop the Russians from hacking, was because Barack Obama had coordinated with John Podesta of the Hillary Clinton campaign to produce a narrative that Donald Trump was being helped by Moscow in their meddling in US elections.

With Hillary Clinton elected, her Loretta Lynch Justice Department in the tarmac meeting with Bill Clinton would have unleashed on Donald Trump as a Russian agent and arrest him, destroying any hope of anyone ever rocking the status quo again, and in this, this would allow Hillary  Clinton carte blanche to crack down on Russia, as Donald Trump has been forced to do.
In effect, you can not have Russian hacking if the Russians are blocked by the NSA. The only way to frame Russia in this, with Donald Trump, and help global Obama policy, was to allow the Russians in, plant evidence it was Russia in other areas and then give a Special Prosecutor the fake evidence to unleash the Department of Justice.

I was a well engineered, but rather lame Chicago community organize frame up, which even with full media control, the framing of Donald Trump has failed.

What this means in criminal legalities is Barack Hussein Obama had an active part in this coup. Obama's crimes were the planting of false evidence against the Russians and leaving doors open for the Russians to enter the computer world through. REMEMBER this blog informed all of you from the beginning of this that Hillary Clinton's server was a quid pro quo for foreigners, but the reason that server was in her closet, was to provide an open door for the Russians to hack through.
In aliases, Clinton and Obama were all using the Clinton server, in order to keep it active, so it would definitely be a target of foreign intelligence. The Clinton server was created to frame Russia and became the frame for Donald Trump.
The reason  Peter Strzok and the FBI never filed charges on misuse of Clinton emails, was this server was an intelligence operation. That was the cover in this for Hillary Clinton, which has not been revealed. She could set up a criminal coup, set up a framing of Russia, and the DOJ would not prosecute as it was labeled a CIA intelligence operation.

This is why Congress has been stonewalled by FBI Director Chris Wray, as all hell would break loose if it was realized this was a Gulf of Tonkin set up of Russia, which was mutated into a Get Trump operation, all to elect Hillary Clinton and later to impeach Donald Trump in the cover up.

ex Oval Office occupant Barack Hussein Obama, should be investigated by a federal Grand Jury, as James Clapper implicated Obama and provided the answer to the mystery for Obama's inaction. Barack Hussein Obama was allowing Russian spies to hack into American computer systems for the overthrow of the American elections and the continuance of pressing Russia to submit to the Obama world order.

Barack Hussein Obama in Grand Jury would be indicted and should have already been indicted under sealed warrant for his arrest and apprehension, if he ever returns to the United States after fleeing to Europe after Attorney General Barr announced he was investigating the CIA in this coup and spying plot.

There you are provided the facts in explaining this from the Lame Cherry as no one else has, as this blog has had the exclusives in this from the start in 2016 AD in the year of our Lord.