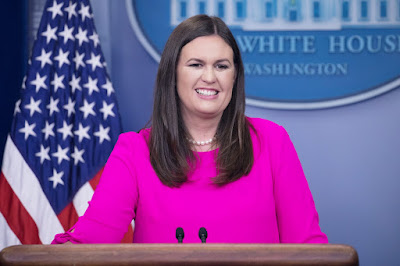 I really detest these fraud Republicans who are the GOP, from John Thune of South Dakota to the things that are in the House of  Representatives as they have accomplished nothing for Americans.


In stating that, there is one magnificent bright spot in the GOP and that is Governor Kristi Noem of South Dakota. That woman is Ronald Reagan Blue State Conservative. She has returned gun rights to citizens, protected home schooling, set up a bounty program for protecting wildlife in promoting trapping and has told the  Reservation communists to go sit on it, when they banned her from  the  Rez.

Governor Noem is a remarkable woman.


In stating that, I have high hopes that Sarah Sanders will be the next Republican Governor of Arkansas. This woman in the dark days of Trump Trans rose to excellence as being able to be a stabilizing force in the Trump Administration. Being able to handle horrid propagandists is a true mark of her intelligence, her  ability to think on her feet, and her craft in being able to deal with Donald Trump and Ivanka, and not get fired.

I stated this last year and state it again, in Sarah Huckabee Sanders, if she stays Reagan Blue, she should be President of the United States in 2024, replacing Mike Pence, as she is that good.

I am not a supporter of her father in Mike Huckabee though, as back in the day, he was part of a GOP which was trying to be that Bush kinder and gentler, I remember a debate where the entire  GOP field was stepping over each other trying to be compassionate to  murderers and rapists in the death penalty. That kind of shit is nothing I am ever going to support or vote for, but in that, Sarah Sanders has shown she is not tepid like her father, but a real cut  to the quick politician on the right.

For too long, political candidates in America have been groomed.  The Democrats suffer from this Vagina should be President Syndrome. The cast of women on the left from Hillary Clinton, Elizabeth Warren, Kamala Harris to that New York blonde are  all like gnomes on the lawn. They have no political movement, except screeching for more lewdness in new ways to murder babies or to sodomize their twats.  That is not a candidate which can be voted for as President as that is not accomplishment, but affirmative actionless, raised by a leftist media.
The same is the fact on the male  side in perverted  old white men, perverted young black and white men, are nothing of appeal in Left Hooker and Peter Buttbomber. It takes more than race and anal sex to be President, and Birther Hussein Obama proved that in spades.

That is what makes it easy for real politicians to rise now, as the establishment has produced so many puppets on the string. There simply is not a political animal like Bill Clinton in the democratic side, to dethrone  Donald Trump in these set up elections. On the right, there is a growing established group of women, who if Sarah Palin becomes an Alaskan Senator, would produce a field of Noem Republican women who would begin to rightly dominate the national political stage. These are women of accomplishment, not establishment GOP and have that Reagan quality which America would be ready for after Donald Trump gets done with 1600 Penn Avenue. Most would say that Sarah Sanders should be Pence's running mate, but  I instead state that Sarah Sanders should be the GOP nominee in 2024 AD and she should pick her own running mate, and as Jorge Bush has his sites on a political future, he being a Conservative  in the liberal Bush fam, would make an acceptable Vice President.

We all have crappy parents and relatives. Jorge Bush should not be rejected because of Jeb and George.

That is the reality which is building and Sarah Sanders would be a welcome Governor to Arkansas at this time in history for a the future of the United States.

Sarah Huckabee Sanders may have dropped
major clue she’s running for office
New York Post, by Emily Jacobs Original Article
Posted by Imright — 6/19/2019 3:03:51 PM Post Reply
Sarah Huckabee Sanders may be following in her father’s footsteps — with a run for governor of Arkansas, according to a report on Wednesday.The outgoing White House press secretary and those in her inner circle have been making calls to GOP donors and operatives in her home state, the outlet reports, as she begins to plan her first post-DC career move, Politico reported.Last Thursday, John Gilmore, political strategist for Arkansas’ current governor, Republican Asa Hutchinson, tweeted that two websites that could be used for a campaign were registered anonymously on the same day in May, SarahforGovernor.com and SarahforArkansas.com.Sanders’ father, Mike Huckabee,
agtG