Everyone has their Mad TV Stuart Moment


Donald John Trump is troubling in his psychological transparency.

In the Friday events, this President reminded me of Corporal LeBeau on Hogan's Heroes in the episode To the Gestapo with Love, where women are used to question POW's, and LeBeau mentions that he used to play in a tunnel under the railroad station and one of his friends used to listen to overseas broadcasts.

From this the Gestapo knew there was secret tunnel the resistance was using and one of their radio operators was in Paris. 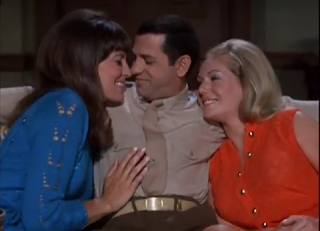 Donald Trump in attempting to look reasonable stated that Iran made a very big mistake in shooting down a US drone spying on Iran. For all the give and take on if the drone was over Iran or international air space, the reality is, if you are on a public sidewalk peering into a child's bedroom, that is a crime, and any nation having a spy plane peering in at them, has every duty to shoot the thing down.

With that reality answered, there is a troubling revelation in the clairvoyant Mr. Trump, who stated he had "feeling" some turban head did something loose and stupid, and this was not a deliberate provocation by Iran.
Donald Trump has zero insight on this, but just related that the NSA has intercepted Iranian secure line communications, which the NSA Farsi translators discovered was this revelation.

Mr. Trump trusted his NSA signet, but ask yourself if you are Obama Iran, with Val-erie Jarrett raised there, John Kerry bows there and Obama worships Shia there, if Iran like most nations already knows the USA has hacked their communications, and after deciding to down a drone to provoke the United States, laid a clever information packet for the NSA to collect in, it was not the Iranians going postal, but just a crazy turban head.
Project this out, that if Mr. Trump had bombed these worthless targets, Iran would have been the victim, as Iran knows the Obama assets would have been leaking the story to the New York Times and Washington Post, that it was a rogue lone wolf who shot the drone down and lunatic Donald Trump slaughtered hundreds of innocent Iranians, like the Syrian Tomahawk chop.

Is that not a plausible reality in knowing the historical achievements of Iranian intelligence, being schooled by British MI6 and the Russian KGB?


Trump told reporters on Thursday that Iran made a "very big mistake" but also said he had the feeling that it might have been the result of someone being "loose and stupid," rather than a deliberate provocation by Iran.

Mr. Trump was full of revelations of American intelligence as he has informed every American enemy, that he has a moral threshold of not killing the enemy to protect the United States. 150 Iranians for a drone was too much for Donald Trump to pull the trigger in this psyche, and he wanted to be fawned over in making this great Trump moralism on display.
In addition, the President states that Iran can not have nuclear weapons. This conveys that Iran has nuclear weapons as has been reported. It also bring the wrap around conclusion that what was on Mr. Trump's mind was not saving Iranian lives, but he has been checked in knowing  Iran has nuclear warheads and will use them.


"... I asked, how many will die. 150 people, sir, was the answer from a General. 10 minutes before the strike I stopped it, not ... proportionate to shooting down an unmanned drone. I am in no hurry, our Military is rebuilt, new, and ready to go, by far the best in the world," Trump said. "Sanctions are biting & more added last night. Iran can NEVER have Nuclear Weapons, not against the USA, and not against the WORLD!"

In forensic psychology, it is a probable which was on the President's mind was indeed the 150 dead would be too many Iranians dead, as this act would provide Iran the cover to retaliate with those nuclear weapons, killing far more Americans, and Americans would then demand to know from this President how incompetent he was in allowing a nuclear attack upon America.

Donald Trump stated what was on his mind. Too many dead Iranians would produce Iranian nuclear weapons against the United States.

As this blog has educated the non donors and the good people who have donated, people are always telling you what is on their mind and Iranian nuclear weapons against the United States was on this President's mind. It matches what this blog reported in Americans were removed from Iraq, because Iranian missiles shot down in being fired at the Israeli state would fall in Iraq, and as Iraq has bunkers, there must be something on those missiles which would harm Americans still in bunkers. The conclusion is WMD nukes or bios.

So Donald Trump's intelligence has a majority probability that he has been led by the Iranians in their goading him.  Iran planned the downing of the drone, and for cover it is in the statistical probabilities that Iran gave themselves cover, by blaming a lone wolf, and knowing Obama NSA would leak what a madcap Donald Trump was in killing Iranians over a mistake.
In that the probabilities are that Donald Trump was not a humanitarian moralist, but instead Donald Trump blinked over Iranian nuclear retaliation over America bombing Iran over a drone.

This would be more palatable if Sabrina Scharf had been involved, but without even Ivanka to behold, all we have are the grey matter of this President revealing things which confirm other US actions as in evacuating Iraq and the United States was perhaps 10  minutes away from having it's planes shot down by Iranian upgraded S 300 missiles.

It all could have been as Donald Trump said, the problem is what Donald Trump was thinking, in how it connects to known United States preparations and reactions. The Iranians knew the Americans would come when they shot down the drone. They were ready and Donald Trump was being played by Tehran.

Donald Trump revealed NSA intelligence signet. Donald Trump was not being moral. That was cover for blinking, and was he blinking over US causalities over Iranian Super 300's, Iranian nuclear warheads deployed, or was it both with 10 minutes to spare.

Every intelligence agency in the world knows Donald Trump blinked, now they are factoring in all of the above in how to exploit that blink.


"We should probably drop a couple of nuclear devices on Iran by that logic absolutely. They kill people, we should kill more people," Kennedy said sarcastically before Schoen accused the host of mocking him. At that point,  co-host Greg Gutfeld interjected, adding levity to the situation.


....and the collective thought of the matrix fills the minds of the willing with events to manifest.

Once again another Lame Cherry forensic psychological examination of statements with more information than all the other media combined, again.