Without Sebastian Kurz, There Is Chaos 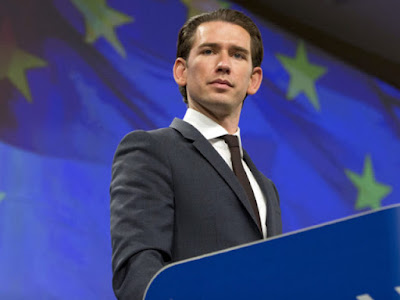 
Who would be better to lead Europe, than Sebastian Kurz, the survivor of the coup against him, as he is poised in September to regain the seat of Chancellor of Austria.

This blog was the first to note that the Kurz protege, Manfred Weber was a perfect candidate, but with resistance to Weber, who would be a more fitting candidate than Sebastian Kurz.

On Tuesday (18 June), the Italian Foreign Minister Enzo Moavero Milanesi came out in support of Weber, calling him the “natural candidate” for the Commission top job.

“Obviously we need to see how all others will position themselves with respect to his candidacy, but it is clear that Weber is the natural candidate with whom the states will have to confront in the European Council,” Milanesi said, speaking at the conclusion of the General Affairs Council in Luxembourg.

The Italian minister added, however, that it was “possible” that an agreement on the Commission job will not be reached this week.

There is a coming European financial crisis which few are aware of. The entire of Southern Europe from Portugal, Spain, Greece and Italy are in grave socialist welfare benefits programs, brought on by the socialist programs trusting in American subsidies in military spending to protect Europe.
The gravest problem is Italy whose government and budget are always out of control. The Eurozone is a building crisis due to all of this debt and member states not meeting their responsibilities.

A crisis is brewing in the Eurozone and it's not even on mainstream media radar. Italy is at the center of the crisis.

At the heart of this is Italy's scheme to actually create a Lame Cherry two tier currency. One currency would be stable in high value and the other would fluctuate to pay off debt. Think of it as Abraham Lincoln's Green Backs to fund the Civil War.

These Mini Bots are not being received by the rest of Europe, which was the same reception Abraham Lincoln's Green Backs received, as the Rothschilds could not charge for this currency, and as soon as Lincoln was murdered, the Green Backs were removed from the economy of the United States and out came the Bank Bucks again for the rich to make money off the poor.


Issuing Mini-BOTs Will Not Save Italy
ECB's Italian chairman, Mario Draghi, has already declared mini BOTs to be illegal. A closer scrutiny shows the measure can…


Italy's idea of a parallel currency gets a frosty response

Mini Bots are promissory notes as Lincoln issued.  Italy would issue them based on future tax revenues. This is a sound economic policy, providing it is not like America becoming a printing press, for the financiers charging Americans trillions of dollars and forcing foreign nations to underwrite the United States debt based on their dollar trade as an international currency.

https://www.zerohedge.com/news/2018-05-18/de-euro-isation-begins-meet-mini-bot-italys-new-parallel-currency-plan
Claudio Borghi, the League's economic chief who helped write the government plan, told la Verita newspaper that the new securities "could be spent anywhere, to buy anything". Mike Shedlock previously noted that 'Mini-Bots' are a parallel currency based on future tax receipts, similar to the plans proposed by Yanis Varoufakis in Greece.

Italy's plan is being rejected, which concludes that nothing has been solved in the Eurozone. Italy has a budget and payment structure which is not meeting EU standards, so the remedy in this is Italy will be fined.

The whole of south Europe is a toxic debt, and rife with socialism. It is the same state as the United States, and the reality is that Italy may be forced to negotiate a sort of Brexit, but this time, it may be the German led EU forcing Italy out, instead of England being the guest who says they are leaving, but the EU can not get rid of them.

The EU will bush this aside debt targets for as long as it can, but the fate is sealed. The EU will either have to abandon its rules or fine Italy.

The upcoming fine and a spike in Italian bond yields will be the trigger for Italy to escalate the crisis with Mini-BOTs.

The longer the EU waits, the more time Italy has to prepare for the Mini-BOT launch.

I expect this to trigger within a year, and possibly months.

Italy is set to leave the Eurozone. The Mini-BOT is the transition mechanism. Few see it coming.

In all of this, looms the reality that it will require stability and strong leadership. Italy in attempting to curry favor for a better deal, has been backing Manfred Weber as President of the European Union. That is facing a great deal of resistance in others wanting their own deal. It has also produced the ridiculous notion that Angela Merkel who has destroyed Germany should somehow become EU leader. Video of the Merkel quest to be queen, revealed that this old woman was doing Hillary Clinton impersonation, as she had gotten heat stroke at the event and was shaking like she had the palsy.
The last situation Europe needs is the mad Frau Cow doing to Europe what she ruined Germany with.

Yet in this the thinking in Europe is coming to Lame Cherry revelations in they are seeking a former Prime Minister, who could be more appropriate than the most successful European President ever, in Sebastian Kurz.
Kurz is available, is a strong leader, and who would be better to have than Manfred Weber as Kurz's deputy to implement all the Germanic success of the old order. The motherland and the fatherland would join in one wonderful Charlemagne renaissance, to move Europe to the 22nd century past the most horrid leadership in the duo of Sarkozy and Macron in France, the feckless coup plotter Theresa May, and her Frau Cow comrade in Angela Merkel. It is time Europe produces a Fuehrer, both Chancellor and President, who will  be able to lead Europe past this debt spending and move Europe into technological producer of export and wealth to benefit the entire world.


“At the Council, they are scratching their heads, searching everywhere for candidates,” said an EU minister based outside of Brussels, who is closely following the process and spoke on condition of anonymity.

This minister said Council members are clearly putting a priority on finding candidates who have served within their own ranks, and this has led to some unusual suggestions, including former Italian Prime Minister Paolo Gentiloni, who led the government that lost power to the populists, former Danish Prime Minister Helle Thorning-Schmidt, and outgoing Lithuanian President Dalia Grybauskaitė.

“They are searching for names among the ex-prime ministers’ club,” the minister said. “They are focused on prime ministers and they’re stuck in the spirit of an exclusive club.”

“It reminds me of the dead poets’ society or royal marriages,” the minister added.


There is not any need to search far in the ex prime minsister's club as Sebastian Kurz is available, has proven himself and is capable of leading Europe for the next 40 years without a break in this new kind of European Presidency.