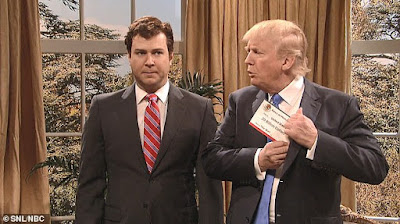 with this check, I am the trillionaire daddy and barron is my billionaire boy.

It is not understood that Donald Trump kept all of the Obama massive tax rapine, Obamacare rapine and allowed the Obama era inflation of high gas prices to rape the United States Citizens of 3 trillion dollars each of his years in office. This destroyed MAGA and more to the point, under Donald Trump the debt burden of the United States increased another 2 trillion dollars.

US national debt reaches a new high under Trump - cnn.com

The United States has over 22 trillion dollars in debt. That does not include the massive insured debt which was around 100 trillion dollars, in case the economy defaults. All of this is fake economy and has nothing to do with realty, but in this Nazi state which Obama unleashed in obliterating US debt as a ceiling,  for the rapine of the world is what Donald Trump has embraced with his two Jew Crew of Gary Cohn and Steve Mnuchkin, which is pure Nazi finance, in it just feeds debt money to the conglomerates while the population is robbed.
Hitler ran his machine on slave labor in concentration camps. Trump has his machine run on open borders Visa Vermin who require no fences as the entire nation is a gulag.

https://www.usgovernmentdebt.us
At the end of FY 2019 the federal agency debt in the United States is "guesstimated" to be $9.61 trillion. Agency debt is debt issued by federal agencies and government-sponsored enterprises, and is not included in the total gross debt of the federal government. Get more information about Agency Debt here.

2019 US Household Debt Level at All Time High - bills.com

Mr. President, under the urging of the same conglomerate rapine practitioner of  the Secretary of the Treasury in Steve Mnuchkin, has backed the robbers in Congress who have signed a two year looting of the United States rewarding both the Pentagon in the military industrial complex, and the Socio Conglomerates in the mafia looting of the public repair funds.

The deal increases total discretionary spending from $1.32 trillion in the current fiscal year to $1.37 trillion in fiscal 2020 and $1.375 trillion the year after that. Discretionary spending is the money controlled by Congress and does not count programs such as Social Security and Medicare.
The deal was largely negotiated between House Speaker Nancy Pelosi (D-Calif.) and Treasury Secretary Steven Mnuchin. It marks the last gasps of the 2011 Budget Control Act, which sought to put strict controls on federal spending.

Donald Trump with these Goldman Sachs robbers are raising debt limits now in lumps of trillions of dollars. Trump's new feeding of the globalist monster is one third of a trillion dollars, on top of the other trillions being robbed from Americans.

But conservative Republicans expressed opposition to the deal because it increases spending by $320 billion over existing law and suspends the debt ceiling without doing anything to rein in the spiraling deficit and debt.


None of this matters, and I explain it to mean what is behind this, as what this signals is for the next 2 years, the US economy is going to absorb the  epic inflation under Donald Trump, by causing this massive higher debt. Donald Trump with your money just purchased his return to the White House, along with all of these other scoundrels.
What is being funded is the war machine, and the liberals who are enslaving America. They are being empowered, while each of you is being led down the American Genocide road, to be replaced by all of these dark skinned low DNA and IQ vermin of the 3rd world.

There will have to be a way to deal with this deliberate bankrupting of the world as the elite's coffers grow by trillions. It is a point now that real economics are finished. Everyone is a crook in this around the world, as they have agreed to American debt to keep their nations allied to this robbery, so they can remain Nazi and Marxist dictators for life.
This is a running out the clock feature until a final solution for the masses of humanity is dealt with.

There is nothing which can be done about this criminal enterprise. There is no reason to be alarmed over this, as this if all fake, and nothing like your having to pay your bills and face the consequences of spending more than you have. You are the sheep in this and you may as well act like sheep and bleat in your feeding pasture and await what will come. That is the only logical way to proceed as it is like Wormwood coming to obliterate life. You can't do anything about it, so you might as well just live each day in bliss as this will prevail.
The past remedies in this were world wars to move the money around, which interestingly raped the German economy quickly, and in moving that money around, provided the same financiers to rape the US economy in seizing everything in the United States. The Anglo Germanics were  the same victims as the Russians, who are battling having the life blood sucked from them for control of resources.
Donald Trump is told all of this is the solution, that it is just how things have to be, and if he was not doing them, someone else would and he would be in jail and Ivanka sold by her Jewlord husband to a Chinese merchant for sex to settle family debts.

I have had enough of lies and deceptions. I have had enough of having my ass chewed. I have had enough in being left for dead. All that is left is Christ and the Truth. That is all there ever was and is why my Faith is there.
What this post is, is about alerting you to things have been settled as robbery has been legalized as the American frog has been cooked in the pot. So the  reality is, America will plug along on life support as our lives are lessened with each passing day. If it was not Donald Trump, it will be Joe Biden, just like it would have been Jeb Bush or Hillary Clinton.
Even with terror events or war breaking out, the same stagnant US economy will continue on, as that is what this Trump looting of the US Treasury has destined America to be, and you will be told how wonderful it all is.
Once again, another Lame Cherry exclusive in matter anti matter.
Nuff Said