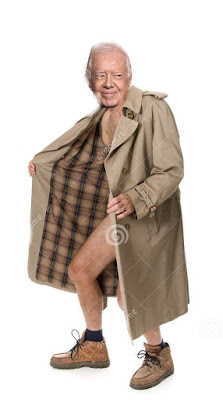 Jimmy Carter has nothing left in his brain cancer Jewish cured existence other than being a POLITICAL FLASHER. This old sod has never gotten over Americans booting his loser ass out of the White House for a real winner in Ronald Reagan.
There has not been a Carter who amounted to a damn. Miss Lillian has the charm of a warm cow plotch  on a summer dress. Billy, who was Jimmy's drunken brother, was the just an embarrassment. As for Jimmy and Roslyn's children, Chiip was a buck toothed moron and Amy was a skank who looked like she just had sex with farm implements. The only Carter who got it right was the old man and he died.

So when Jimmy Carter pronounces that Donald Trump is illegitimate, after the President like all Presidents showed respect to Jimmy in acknowledging him, Carter the fool reminded everyone that Obama was illegitimate by claiming Trump was illegitimate from Russian hacking.

Jimmy Carter, Electoral Oracle
PJ Media, by John Hinderaker Original Article
Posted by Hazymac — 6/29/2019 6:33:33 PM Post Reply
Jimmy Carter’s latest is at best delusional. It seems almost inconceivable that a former president would say something like this, but we live in a time when all norms have been abandoned by the Democratic Party: There is no doubt that the Russians did interfere in the election. By buying a tiny handful of Facebook ads that promoted Donald Trump, Bernie Sanders and Jill Stein, and attacked Marco Rubio and Hillary Clinton, and, allegedly, by phishing the DNC’s email system with the result that more people became aware of the obvious fact that the DNC had helped Hillary get the nomination.


It apparently needs Lame Cherry God Inspired Wisdom to address this as I have had enough of this Obama State Lie. The Russians did not interfere in the least in the 2016 AD in the year of our Lord elections. The Russians could not, because the Russians are too ham fisted to ever put one over on Americans.

Sure back in Carter's day the KGB funded those anti nuke nuts, who would believe anything, but all of those crazies were dead or voting for snowflake Bernie, so the Russians did not influence one leftist zealot or one normal person in 2016.

This is ridiculous in this worn out Hillary Clinton bot story that Russians were on Facebook or Twitter directing political discourse. Obama was far more destructive in his hired Jewish minders in 2008 which took out Hillary Clinton and provided the black wash so 10 million votes could be stolen from John McCain and Sarah Palin, to install illegitimate Birther Hussein into office.

So I thank Jimmy Carter for reminding everyone that Obama is a bastard in more ways than one, but at the same time, Russia influenced nothing in the 2016 elections or any other American election ever.


There were far greater influences in 2016 and you can look to Jewish Mosaad for one in their online wetware. Then there are the unethical media always hosing it down for some liberal. The weather had more effect on the 2016 elections than Russia did. To make it plain, Russia had about as much effect on the 2016 elections as the #NeverTrumpers did led by that Jew in a can, William Krystol.

Are American elections stolen? Yes all the time, in a dozen different ways from e vote fraud software, foreign voters and ballot stuffing. That is what the insiders were so pissed about is Donald Trump produced enough votes in the 15% surge to keep the election from being stolen by Hillary Clinton.
That is why image Obama was noting that things looked bad in Virginia as the margins had all disappeared that voter fraud was supposed to create.

So as often as it needs repeating, the Russians had zero influence on the 2016 elections, just like Jimmy Carter in his political klusterfuck he is always trying to get someone to notice him.


Everyone hates this old prick from Bill Clinton to I will suspect Donald Trump. He is just a backstabber. He pretends to want to help, but with Carter it is all his way and crown his cock on parade in how great he is, or he turns on you with a venom, just as he did with Donald Trump.
Carter is just a pathetic old has been, who should have never been President, considering there were people  vastly more qualified in that era in 1976 against Gerald Ford. The only reason Carter got to be President is liberals were so nuts in wanting Nixon's blood, they would have elected the devil......instead they chose lust in his heart Jimmy, who was worse than the devil with his fake Baptist shine.

It is said by everyone that they all want Jimmy Carter to just die. No one was happy the Jews saved him from brain cancer, and the only redeeming grace in all of it is, every President ex or current, does not want to be the one who has to appear at a Carter eulogy, which this egomaniac scripted 40 years ago. Yes Carter has every last detail scripted for his funeral, down to the number of peas on a plate.
He is going to be as big of pain in the ass in death as he was his entire life.

Jimmy Carter is the constant reminder of what Alexandria Ocasio Cortez was noting in the first DNC debate for 2020, in all these weak candidates are like high schoolers who did not study for a test. It says everything in Joe Biden could not finish these political retards off as he is one of them, and Jimmy Carter is a the reminder to America that the democrats have put before the people, over 50 examples of why democrats should not be President as they are all as head up their ass, egotistical morons as Jimmy Carter is.

Once again another Lame Cherry exclusive in matter anti matter as only this blog can put things to end the conversation.

Jimmy Carter needs to be mocked and ridiculed and made aware that he has set his legacy, and no one is going to be anything but pleased when this political flasher is answering to Jesus  in Judgment for all of his sins. 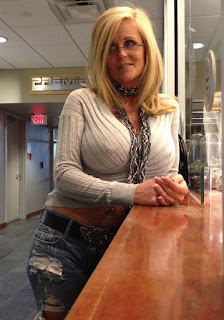 Jimmy your thinking part looks a dried up eel on the Mississippi mud.