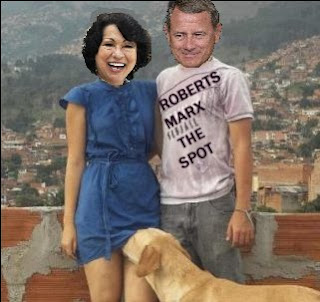 
It is time to stop the madness in defining 3 million democrats running for office as a debate, as even Alexandria Ocasio Cortez noted it was like watching unprepared high schoolers  trying to dodge questions from a teacher, or defining the subversion coming out of the John Roberts Supreme Court as decisions, because what has appeared in the Roberts Court are not descisions, but manifestos.

Whether it if Brett Kavanaugh sidling up to abortion or Neil Gorsuch cuddling with sodomites as Anthony Kennedy did, these are not Constitutional explanations of United States Law, but personal prejudices to a substandard order.

The worst of this has been Chief Justice John Roberts, who straddles the fence in most hearings, hopsing an Anthony Kenned or another liberal will vote for him. When though that is not the case, then there appears John Bunghole Roberts with the Roberts Manifesto, which always reads like a 90 year old Harvard Professor, with senility, drunk on his ass, and having snorted too much coke from 1960 to 1990.

Roberts had no intent on upholding the protections of the Law in Obamacare. Instead Roberts, created a fiction that indeed Obama did walk on water, in an illegal law forcing Americans to buy insurance, was not insurance at all, but was instead a tax, so that the IRS was forced to bully Americans with fines and jail time to force that action from a free people.
With John Roberts, if it flies  like an eagle, quacks like an eagle, and looks like an eagle, he calls it a turkey so he can take it home and eat it on Thanksgiving.

The same is the latest manifesto authored by John Roberts in this Orwellian Era of the Roberts Supreme Court. This time Roberts must have driven himself insane without sleep for weeks in plotting his latest liberal overthrow for invasion USA.
Roberts decided that the question of Citizenship was ok on census forms, because it has been ok for the entire life of the United States. Roberts had to find it was ok, or he would have to start throwing out more Obama hedonism he voted for as it did not have precedent.
Then enough to make Ruth Bader Ginsburg's old head spin right off her neck, Roberts turned around and wrote a novel, which both Samuel Alito and Clarence Thomas rightly trashed as not even law, that the Supreme Court would return the question to a lower court, which in effect was John Roberts taking the census question off the census, because the lower court could not make a ruling before the census was taken.
That is the madness of John Roberts as like liberals with gun control and aborticide, he creates laws off of other laws which have absolutely no legal reason. I fully expect on the issue of aborticide, John Roberts will be voting with 4 other liberals, and produce a manifesto that aborticide is a religious act, so therefore it can not be denied, because Jews used to sacrifice their babies to Molech centuries ago.

It is obvious in the John Roberts obfuscation that he is trying to uphold the destruction of the Constitution for the world order with the Bush family, Clintons and Obamas produced such wonderful choices like David Souter, Steven Brier, John Roberts and the lesbians of Kagan and Sotomeyor, but Roberts has the problem in if things go well for Donald Trump, and the tide of zealots turn to the streets, John Roberts might just get impeached and the Department of Justice might make public what is in his sodden perverted past which has had him issuing these insane manifestos against the Constitution.

Until that time, and the Robespierre Courts produce a Roberts ala lantern, let us stop describing the verbiage coming out of the John Roberts Supreme Court as decisions, as these are not decisions, they are the lunacy of a raving liberal traitor to the Constitution in John Roberts Manifestos.

Once again another Lame  Cherry exclusive in matter anti matter.