why the hell I don't mow lawn 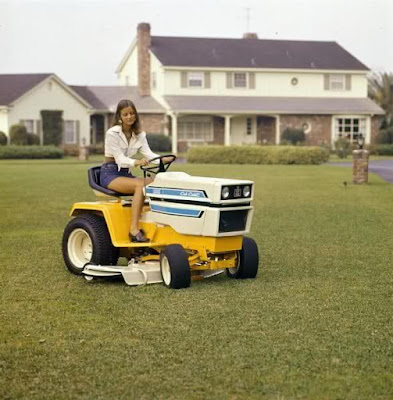 I honestly do not know the last time I really mowed a lawn. I remember years ago my asshole brother in law and sister "gave" the mother their old riding lawnmower, and we used that once, as that gem would not start, but I really do not know when I last mowed a lawn, as my lawn usually looks like a forest unless it is grazed off.
Last time I tried to graze it off, Daisy ate two screens off the house, so that ended her part in green lawns.

Today though, I got a lesson in why I do not mow lawns.

It was 4 1/2 hours mowing lawn in a riding Toro for the Uncle. as he no longer can mow. I volunteered for it being a good person and hoping he would sell us the place, as they realize it is too much of a hassle to own a place and having children 12 hours a way who have pipe dreams and not reality.

It was hot. It was dusty. I felt like I was in the cavalry riding a trotting horse for 3 years and there absolutely was nothing redeeming about it. It did not help that Uncle's son appeared to mow the lawn a few weeks  ago, after I had started the mower. Lesson today was, he must have burned nothing but old gas as the thing kept acting like it did not want to run, and then I started noticing that the one blade on the mower was leaving a swath, or son apparently used the mower for digging dirt and really dulled the blade, as it was not like that when I used it last year to mow crab grass for Uncle, so it appears that I will have to get the mower rolled over and the blade off and sharpen it or replace it.
At least the engine stopped sounding like it wanted to slug, when I put our fresh gas in it.

Yes it is one of those deals where I have been furnishing the gas and labor, as other people get to play at caretaker in driving by or drinking beer. I hope that man wises up to what the hell is going on, as his kid mowed off the asparagus and for reasons I am puzzled by, planted a 6 foot row of some kind of corn on the mower  blade tilled hill.
Corn needs like 4 rows to pollinate, and if it gets dry the grass will zap all the moisture and .......I am just waiting to see what adventure awaits the corn. I hope the deer eat it off.

So I am hot, aching, tired and educated why I do not mow lawn. It is not the mowing that is so bad, but it is the  "Why in hell do people have to mow the whole mountain?"
I drove by some anal assholes I am related to this past week, and the gal who is 57 years old, honest to got was mowing through a forest of grass, to mow around some implements. I mean geez louise!!!! That must have been like  hours of that shit and it accomplishes nothing. My asshole bro in law mows everything to the bone too, as there is just something wrong with these people.

The only real pleasure I had was mowing across pine cones. They shot out of the mower like grenades. Hell with those blades that dull I was not going to hurt it any, so with my aviators on, it was launching frags at the forest.

I figure I only have about 6 more times to mow, or maybe more as Uncle is old, and all he has to do is look out the window and see that the grass needs mowing. He used to mow to the roots and the complained about the weeds. Well if he left the grass grow that solves the dandelions and crab grass problem completely.

Maybe his kids will volunteer like the other one did in grabbing the keys, and then started moving everything as this is a control issue in what he is going to do on his place in taking over as the parent of course was not doing it right, like hanging an extension cord where he could not get at it, and I could not find the thing.
The kid was supposed to get the lights working, but when I checked, they were not working, so I am guessing that is a future project for me to figure out. I think the problem is some of those big old amp fuses that a black with copper tops on them which burned out.

I dislike geniuses who know everything and nothing gets fixed and the mower sounds like it is falling apart after one exposure to the kid.  This rate the mower will be shot to hell by the time they get done all showing how much they "love" the old man. Love is the word in 'I want my inheritance".
The thing I am rolling my eyes over is not the mowing, but the knowing that I will have four people there, who will all be like teenagers in knowing it all and busting shit. Granted it is not my shit, but I am figuring that in the melee, I am going to be the one having to fix things. I hope none of them decapitate themselves on the electric wires......and I guess  I will just stipulate that if errands need running, it will be Uncle's pick up and not mine.

I honestly keep praying that these people will see that this is too much for them to deal with. Everyone has a fantasy of how good things were back in the day, but it is a different ball of shit, when you have to drive 8 hours, then mow lawns and fix things, and then have to drive back home.

I am waiting for the dysfunction though of the family gathering, the costs, the people who will trash things, and how it is July and hot as a bitch, and no one is going to be happy, and everyone is going to want to be inside, but Uncle does not like the AC running, so they all can sweat their asses off, while I am at home with TL, relaxing with our feet up as it will be a non mowing day. 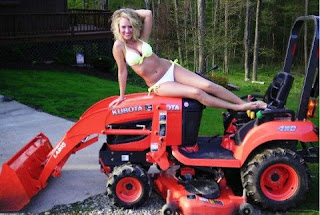 I always wanted a garden tractor like this. Can not afford it as rich people have to donate, but I wanted a Ford when they made them, but I like the looks of these Japanese things too. Purpose of this varmint would be to scoop shit in that bucket. I though would be displeased as it was new, and I would not want shit on it.

So for my aching back and the need for a shower, I have memories restored of why I do not mow lawn. I think people who mow lawn in quantity have a psychosis, just as my malady is if it is green, it is grass and as it is not harming me, I ain't in a mood to disturb it.

One again another Lame Cherry exclusive in matter anti matter.