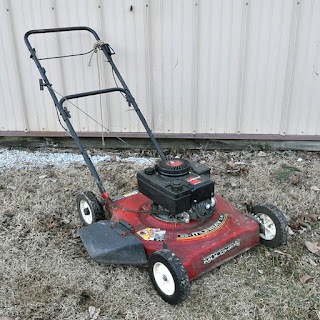 I believe that there is something psychologically defective with people who mow lawn. I have watched these nuts mow ditches a quarter of a mile from their homes, mow around implement sheds, to mowing in their groves. There is no end to what these creatures with dissatisfaction in their lives, try to cut away their problems to make it appear they have some semblance of order.

To say I hate mowing lawn is right up there with other things I detest, so naturally in caring for the Uncle.........I am bouncing my butt around for 4 hours mowing lawn.

For the mother's, she about killed me mowing lawn in my low blood sugar and allergies. She had a push type Murray, which she purchased new over twenty years ago and it looks like nothing in the above photo.

The wheel fell off and I bolted it back on.

Then the pull cord went tits up and that should have been the end of the Briggs and Statton, but our old well driller had a knack for old two cycle engines and he started his with a cotton pull rope around the head. So I took the shroud off and wrapped a pull rope around it, and thankfully have not got my finger pulled off in this jack knife fix in being poor.

I rarely mow. Did not mow last year, and I think just mowed a swath the year before.

This year with the mother dead, I wanted some space in front of the house, and the cats like snoozing in the grass there, so I pulled the Murray out, which had been sitting outside all winter, but covered up, pulled the cord and POOF it went and I mowed the area.

The thing is I planned on just mowing one more time when my brother got here, and as I had been over sharpening the blades on Uncle's mower as his son showed up here and used the mower for a plough in dulling the blades, I thought I would sharpen the Murray as it was shredding grass and not cutting.

Yeah, SHIT!!!!!!!! I was hoping that it was just from tipping the mower over, but what it was of course as everyone knows is the float was stuck. I banged it around, tapped on it, as I did not want to take it off, as what started this was the gas hose was shot and leaking and I replaced it.........yeah not from the store, but I found an old brake hose in a bale the neighbor sold me so I repurposed that.

Yeah, that was not so good as still had gas like a Mideast oil well coming out. I took the plug out, left the breather off to dry it out and all I accomplished over the next weeks was pulling on that rope and not a thing happened.
First I was not getting any compression, then too much from flooding, so there it sat in my hoping it would fix itself.

It did stop flooding, but it would not start. So I decided to give it a go today in taking the breather off as TL was petting the cat named Kuri after the squash. I could not find the right socket, but finally got a quarter inch to fit and off came the breather. Everything looked ok, so I thought I would put it back together, prime the pump with a few compression of the carb and pulled the cord and nothing.

I have never had any blessing with small engines. I simply can not get them to work. Seriously, I know all a engine is spark and gas. You got them and it works, that is how easy it is.

I did scratch the plug with my knife and thought that would be as much investment as I wanted to spend on this old mower, and I pulled again, and to my delight the muffler popped a few dark clouds and off the engine took in running.

Of course I did not have enough gas in it, but got the small patch mowed, slugged it to which I swore some profane things, got it going again, and got it parked.

God is good to me as this was bugging me in what the devil screwed this mower up with, as all I wanted was to mow one more time before the family appeared, and with that I was blessed to get this thing fixed.

I am now considering something really stupid ass in trying to get a Snapper which never did run, get running. If I had the money, my plan was to buy an 8 hp new one and fit the spindle length right and use it that way. I had a 5 hp given to me in and old Gambles mower that started on fire, that I could probably replace too, but it is like 150 to 300 bucks is a shit load of money to me, and I don't have the mother's shit paid for yet, like Zelda's windshield cracked in the cold last winter and I still have to get the titles changed to my name.

Anyway, I told TL that TL should go into small engine repair, as I would love to actually get a handle on fixing them, as there is not allot to them, and either they run or they do not run. This time by God's Grace I won in getting this thing running.

There is so much shit I want to do and no time or money. I look at Craigslist and see all these old tractors and I would love to haul a pile of them home, have a garage, heat it, and piss around all winter tearing them down bolt for bolt.
A few hoists would help, as all of these old International tractors have their torques out, and that would be something to experience a few times in turning them back into the soil tillers they are meant to be.

Anyway God helped me get a lawnmower everyone but me would have junked. It was a good day and I am thankful for that. 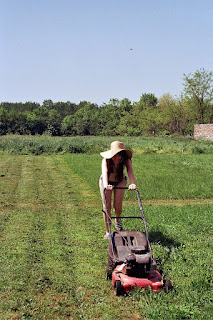