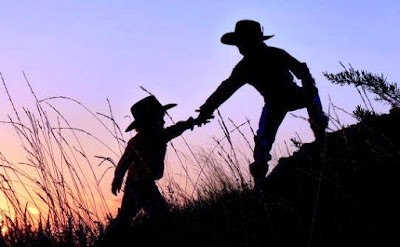 It is a sin to see the need for good and not do it.

I have learned though that good deeds are soon expected and you end up getting not appreciated, but that is not the reason to stop doing them, because God expects goodness from you which He will reward in time.

My Uncle is an interesting man. He is like a stud on the end of my rope who got whipped too much. I have a hell of a time with him in asking things sometimes, because what I am trying to do is make sure it is the way he wants it, but with his children, they are bucking him and trying to force their wills on him.
It is like in his oatmeal which is instant, with dates and nuts. He got that look on his face as if I was questioning him about it, but all I was trying to ask was if he wanted something else. That part is difficult to deal with, but he is learning that I can be trusted when others can't.

He is a peach compared to what the mother was. That woman did not appreciate anything and was plotting shit all the time. She was vile and evil and what she put us through still has us  stating that we are glad she is dead.

Uncle though is a person who is tough, but he has been hurt a great deal, as most people have. Where the mother became more vile, he is mellowing with us. We no longer hear "Why have I lived this long", and I can give him shit.
Like the other day I asked him if he wanted some fruit salad and the went into I made too much like his girlfriend does as all he was eating was leftovers, nothing fresh.

So I made the salad and put it into a tupperware single serving and put it by him and said SINGLE SERVING and he grinned at that knowing I was listening.

What bothers me is I expected more help or his children calling him. What has taken place is  no one is calling and it is just TL and I doing the twice a day checking. I do not mind, but that old guy deserves better than that. It was the same iwth the mother in her children would not do a thing to do anything with her. She resented that and took it out on us. People got to vent and I usually end up vented upon.
I got my ass chewed a couple of weeks ago for something his son did. I never said a word and just fixed it, but it was like, "Geez Louise!!!!!!"

It is good works though and I like doing them, because I know it pleases God. I had not been able for opportunities presenting themselves for years and that bothered me. Last year Uncle called to mow his lawn, so I did, then offered to do more this spring, and it came to this checking on him. Most of his children wanted to dump him into the geezer home, but he has improved a great deal and I tell his daughter that when we have contact. It allows me to do good and it gives God  opportunity to work.

I am pleased that my sister who was using Uncle as cover for her abandoning the mother, was furious that we were looking after Uncle, as she was telling everyone they were his caretakers. Uncle almost died under them as they were not over there 3 times last year. I am very pleased that my being a watchdog for him in keeping that shit away in protecting him was accomplished by God, as no one needs that kind of manipulation in people plotting to supplant the children.

What I am trying to accomplish is  to give most of his children and him, the opportunity to heal with each other. I never received that with my parents, and while that is something I  have let go of, if I can help in this, I am going to do it.
The main problem is the two oldest kids are real tough SOB's and they want him in a geezer home so they can have closure. They don't listen to him, refuse to do what he wants which would help heal, and they break this things. A great deal of psychosis  there, but if some of the others can have a relationship that will be a good thing for them.

Doing good is a a hard job. I am thanked, but the glory goes to God. I am with TL though trying to serve God and we are suited to this geezer thing I think, because we are honest, we listen to what elderly people want and I don't pull things on people.
I never if possible handle any person's money. I informed his daughter after doing some things, that the change went back, and that this would end my dealing with cash from Uncle. The best way to not get into trouble is not to have money involved.
He told us to get some things on an account. I just shook my head that I would but told his daughter, that I was  not going to be doing that. I have watched too many people start saying" Well they would want me to have that". No they would  not, and I am not going to ruin my reputation over shit that does not matter.

I actually would not mind having around  geezer to do  this stuff for in looking in on them. I would leave the doctor stuff to the family and the money stuff, but the  errands, mowing and whatever else was needed, I think I would enjoy that. If someone was a problem I would just say, that it was not working out and that would end it.
That though is up to God in what might appear in His doings as I have enough to do, but it would be money coming in, as rich people for some reason just can not find that donate button.

Some of you are doing good to us and I thank you for that. The Viking does a great deal of good for his Mum and Girls. Others have family they are taking care of or answering God's call, but in the end, it is doing good which God expects from His  children as a proof  that we are His, as most people run for the door when it comes to doing good or try and scam God in doing the least and calling it good works.