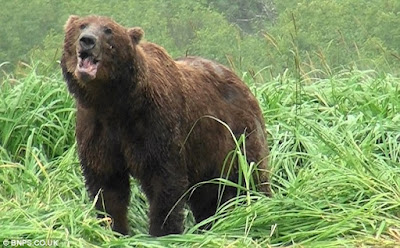 I was reading a number of bear stories in a hunting book I got for free in a junk bin, and I noticed something in common in all of them:

Common 2: Most of these jazzbos did not have a handgun or even a firearm, as it started with bowhunting.


One of the most remarkable stories was from Michigan where a gal actually popped a big black bear with a 30 30, one shot and down it went. This same bear had come to the bait and shook a smaller bear off it like a rag doll.
As the guide was gutting it, the woman screamed, as the rag doll bear charged them, seeking revenge on the dead bear. The guide popped a round between the charging bear's legs, stopped it, it came back and started mauling a tree, where he shot the tree and the enraged bear took off mowing down the forest as it was furious yet as long as they were there.

Much has been written about whether one should have a rifle or handgun. It pretty much has been decided that shotguns have no place in the bear arena, unless the technicalities of a special cast slug, but shotguns do not have great accuracy and that is what you need is an accurate gun, as most people in a bear charge are not that accurate.

I know Alaskans talk  about berry picking and leaving a rifle lay, wander ahead and here comes the bear. Tom Gresham who has a great deal of good advice, advises a firearm with hard cast bullets to penetrate a bear, and of course handgun.
I would never use a semi auto in 10mm or 45 but other will.

I have read in my book of guides plinking with a Ruger Mark semi auto in 22, and ending up about getting killed as only one bullet in 14 made it in. I know bears have been killed with 22's as one woman did it. Shot like 6 of them in camp for disturbing her sleep, but plugging black bears with a 22 is not my idea of healthy, no more than relying on a handgun.

For me, I like 45 Colts with hard cast bullets. I honestly do not like elephant powder loads as the old Alaskan maxim was they liked the 30.06 rifle, because of the light recoil, they could shoot a bear accurately in the head with a 220 grain bullet.
Like Elmer Keith, I like big holes and hard bullets, but I am not delighted with Magnums, simply because most people are not going to shoot 44 Specials in a 44 Magnum, 45 Colt in a 454 Casull or 38 Special in 357 Magnum in practice. I do like hard hitting loads, but you can get good cast bullets in reasonable recoil loads to fix the problem of penetration, as the 21st century is not the Dirty Harry century of "make my day".

I actually from my youth, in a trade obtained a 7600 Remington carbine. I never like mentioning guns that are no longer made, because it is like that prick Jim  Carmichael of Outdoor Life raving about his little 600 Remington bolt action in 350 Remington magnum as the ultimate mountain elk rifle. Great for him, but the rest of the sand on the ocean did not have one.
This is an 8 pound rifle I have, short barrel, 30.06 which is really handy. I scoured Ebay years ago for a Weaver flip over scope mount. I remember when I got it, the redneck who I outbid told me, "Yeah I was not home, my wife was bidding, and you would not have gotten it, if I had been bidding".
I thought, "You tell yourself whatever you like shit squirt, as no one beat me on Ebay as I was the best snipe bidder ever." I had it timed that with my 18 kbs internet, that it took 7 seconds for the transmission of data to Ebay, and if I had everything filled out, at 12 seconds, I could get the last bid in on anyone. I only lost a Wagner #6 pan on a 4th of July, and I have no idea what the hell happened that time as there was a glitch, but suffice it to say, if I wanted something badly enough, I got it every time, and I would have walked home with this poor redneck's wife too in the deal if I had a mind to.

In mounts, my beloved Uncle had the see through, and I had them too, but the scope sits on Everest. These flip offs are a low set scope and this is one sweet package I have with a military sling, that is supposed to be hunting elk if the rich would get those donations pouring in. It is what I would consider a lovely bear gun, loaded with penetrating bullets for skull shots, or if you have enought time a raking boiler shot or two, just to tear the hell out of the bear's insides, in the hopes if the head shot does not connect, the bear might expire before it got down making me a cripple or cadaver.

Otherwise, I am high on lever action rifles in 45.70 with hard cast bullets. As I stated, I like big holes like Elmer Keith, but most people like me can not effectively like Mr. Keith drills holes in needle's eyes with all that recoil, so I like bullets in the old Finn  Aagaard maxum of medium weight  bullet, medium weight rifle and medium weight speed, gets most animals dead effectively.

So when it comes down to it, I can't see why old husband geezer can't be out with a rifle as the wife is picking berries for his pie. It is the job after all. Barring that, I tend to like a pistol on the hip and a rifle nearby. Dogs help a great deal until you get one that wanders off and brings a bear back to you in charge.

It is interesting in from my youth up I always had a rifle with me in the pickup, but sort of got out of the habit. As of late, in the brier patch, I have gotten in the habit of carrying the only revolver I own in a 22. Seems odd for a gun nut, but I was hestitant about it, as the bat behind the seat is less trouble and police do not wonder about going to batting practice.

Getting in the habit though of the revolver, I like being armed like this, as I shoot varmints in the head in traps. I look at it now as I do my Trapper knife and the lock back I carry in my pocket, in I would not be without them, and they are just handy to have.

I like things handy and I like having overkill in two guns are better than one, and if I had the money I would have a 32 on my left thigh and a 45 on my other shapely thigh, with some kind of rifle along for the ride too.

As it is now, I actually found in the mother's closet an old Westernfield bolt action 20 gauge which I am fixing the trigger guard on. I can hold that in one hand like a pistol. It is a sweet, light little thing, that is going into the pickup for various things I could think of using it for like gamebirds or drilling skunks. That though is not a bear gun, but it is one nice little pot gun, even though the metal is so soft in it, that it has worn.

Anyway, that is about all I care to discuss about this, until the uber rich shell out the cash and I get to play with real toys again.