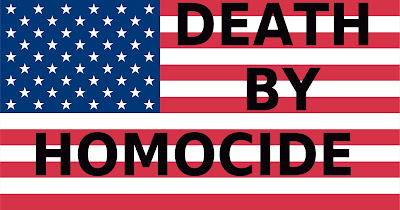 
The propaganda left has created a number of Artillery Words and phrases to further their agendas from "A woman's right to choose" which has aborted the Black population in the United States to the term "homophobe". Both of these terms are criminal acts against the American, due to the fact the phrase negates the right of the human in the womb, whose rights are inalienable, in the woman's rights end where that child's rights begin, and the term is a criminal slur against normal people, as there is not such a condition in psychiatry of a fear of homosexuals, and both are designed to obfuscate and make criminal, those normal people in and out of the womb.

There is a real term though in HOMOCIDE, not homicide, and no it is not the murder of the homosexual, which in previous times the State legitimately executed to protect society from this perversion of human relations, and that justice must be comprehended as it was not anything to do with hatred nor religion, but the fact that two males or two females, can not procreate, and that in nature is the reason for sex. Procreation is the design to further the species, and without procreation, there is extinction, so the definition of HOMOCIDE is in fact, the acts of homosexuals which bring about the extinction of a race as it is not procreating.

Sex is more than an act of sex. Sex is an entire framework in nature by design to produce a new generation of offspring to be reared in  a safe environment. Whether it is a mosquito female in the most basic form of procreation in laying eggs in a pond which will not go dry before the offspring are hatched and grown to adulthood, to the necessary 18 years of guidance a human requires from both a father and a mother, to tech them the correct interaction between male and female, the natural form is to raise an offspring in an environment where it will be the strongest in order to further that species.

In the lower orders, there is not such a thing as a homosexual insect. As the orders advance, rats will become deviated or deviants from male and female correct interactions, when they are over populated and placed into confined areas. Nature at that point rectifies the situation with plague. For humans, nature has not produced any plague, except in the instances of Sodom, Canaan, Athens, Rome etc... that when the homosexual becomes a protected elite by a police state, preying upon children, the children produced are psychological incapable of loyalties and the ability of defense. In short, all of these sodomite realities, produced a degrading population which was soon crushed by outside forces, which in most instances was a human plague which was not practicing perverted sex.

It is a fact that the first real challenges and checks on the Roman Legion were by the Anglo and the Saxon, both of whom were sexual normal cultures in the Issini and the German. The Issini fought and produced the first signal that Rome was dying of sexual deviancy in Hadrians Wall. The German slaughter of the Romans was due to Rome attempting to whore the German women, who were a chaste people.

Each penetration of the anus and vagina in Rome, was as certain of death as the sword. The Legion died as did the Spartan, from the molestation of the spirit in removing the ability to fight.

This is homocide of nations and it is reality. This has not one thing to do with hating or fear of homosexuals, which does not exist. The violence though which the more testosterone infused males of society which drove the faggot from their midst, was a natural protection, which has now been criminalized in order to protect the community, as the woman which will not produce healthy children and that same penis which will not produce the example of force to protect that womb, is of no use to that society, and sucks the life from that society as it consumes resources, gives nothing in return at the base of what a society exists for, and corrupts the psychological normalcy of the children, producing an emotional mutant which does not properly understand how to parent a child, nor husband a household, for the greatest advance of that society.

There are reasons the Bible provided by God laid down societal structures which worked. That book has been mocked with effect by the intellectual deviant, so that the ignorant who trusted in it, have given up that sound design for society. It is based though in the genesis of human civilization from it's roots when humans evolved from family unit protecting itself, into farmers and shepherds, who in organization of covenant, began the governance of groups of people, which became cities. The basis of this structure was the necessity of producing food and shelter, and the defense of that food and shelter. In that a working covenant arose of those who fought with swords and those who farmed with hoes. One fed the other in exchange for one protecting the other.
This is the basis of all human law. The mocked 10 Commandments or Common Law, in the summation of those laws is entirely, Thou shalt not steal.
Steal from a greater authority in a God, produces  anarchy in society and it destroys itself. Steal possessions, food and sex, and the greatest theft of all in stealing life,  defined as murder or homicide takes  place, first in the infants dying from dead parents or lack of food and shelter, and  then the death of the community, and then the death of a nation which is genocide.

The United States is facing an enacted American Genocide, and the basis of it is, the importation of a competing vermin race of the 3rd world, waged against the Protestant White whose history is stable homes and self control, with the cultural rot of the homosexual and pedophile, obliterating the necessary environment of the protection of children to produce a generation capable of producing food and engaging in war. This is HOMOCIDE.

Once again, this Lame Cherry White Paper is the definition of an entire bastardization in the violation of society, in cutting to the quick, past rhetoric and propaganda to provide the scientific and psychological facts of what is being implemented. There is no denying that this is deliberate and it is being engaged in by an elite deviant class, no different than those who appeared to pound on Lot's door in Sodom, demanding to rape Angel's asses, as it was a new degree of homophilia not degraded to.

Once again, this is another Lame Cherry exclusive in matter anti matter. Producing the White Paper which tomorrow will become the talking point in the word homocide, the sexual death of a nation by deviancy.