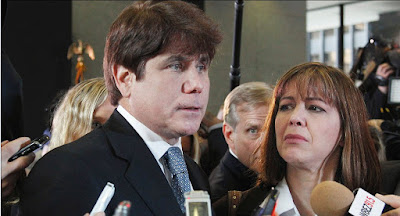 The same regime which created Pissgate, is the same regime
which made me a political prisoner.
It has been most upsetting to my wife.

I was reading recently of a Chicago propagandist railing against Governor Rod Blagojevich yet in why he should not be pardoned as he attempted to get something out of an Illinois Senate Seat vacated by that election thief Birther Hussein Obama.

Americans like to rail about things, like people ending up dead in prisons in Moscow who are Putin's enemies, and yet James McDougal was murdered in prison when about to testify to Ken Starr about Bill Clinton crimes, and as of late, Paul Manafort had his life in jeopardy in prison, and pedophile Jew Jeffrey Epstein survived one murder attempt in prison and was finally murdered to silence him.

Mockingbird is a grande chirping for narratives that deny people the facts. Governor Rod Blagojevich did not attempt to sell for cash the Illinois Senate seat. He did what every politician does is he tried to make a political deal to his benefit.

What is being covered up in this is what has always been covered up in this, and that is Rahm Emanuel for Barack Hussein Obama was in negotiations with the Governor over this Senate seat, meaning he was colluding as was Barack Obama.
Obama's people were simply pissed that they could not dispense that seat as graft to who they decided to pay off after stealing it from Republicans.

In this as a refresher, Attorney General Eric Holder, again, involved in notorious crimes, warned off Rahm Emanuel, because the FBI was recording these conversations. That is a felony on Holder's long list of felonies.

So in review, Rod Blagojevich was the saintly Slav in this compared to Rahm Emanuel, Barack Obama, Val-erie Jarrett, Michelle Obama and Eric Holder, and an FBI which was already covering up this crime, as was the DOJ, as was the FBI of George W. Bush in covering up Al Franken's election theft in Minnesota and the notorious Black Panthers intimidating voters in Philadelphia, Chicago and Obama stealing elections from John McCain as well as Hillary Clinton in Nevada and Texas.


Just for the record.

Rod Blagojevich was the first Donald Trump in being targeted by the deep state. Mr. Trump has pardoned slave trading Jews in Iowa and deviant black boxers who are dead. It is past the time of pardon of Rod Blagojevich. It is time to pardon the Governor and appoint him acting Ambassador to liaison with Chancellor Sebastian Kurz to restore this Slavic man's dignity and the wrongs done to his family!